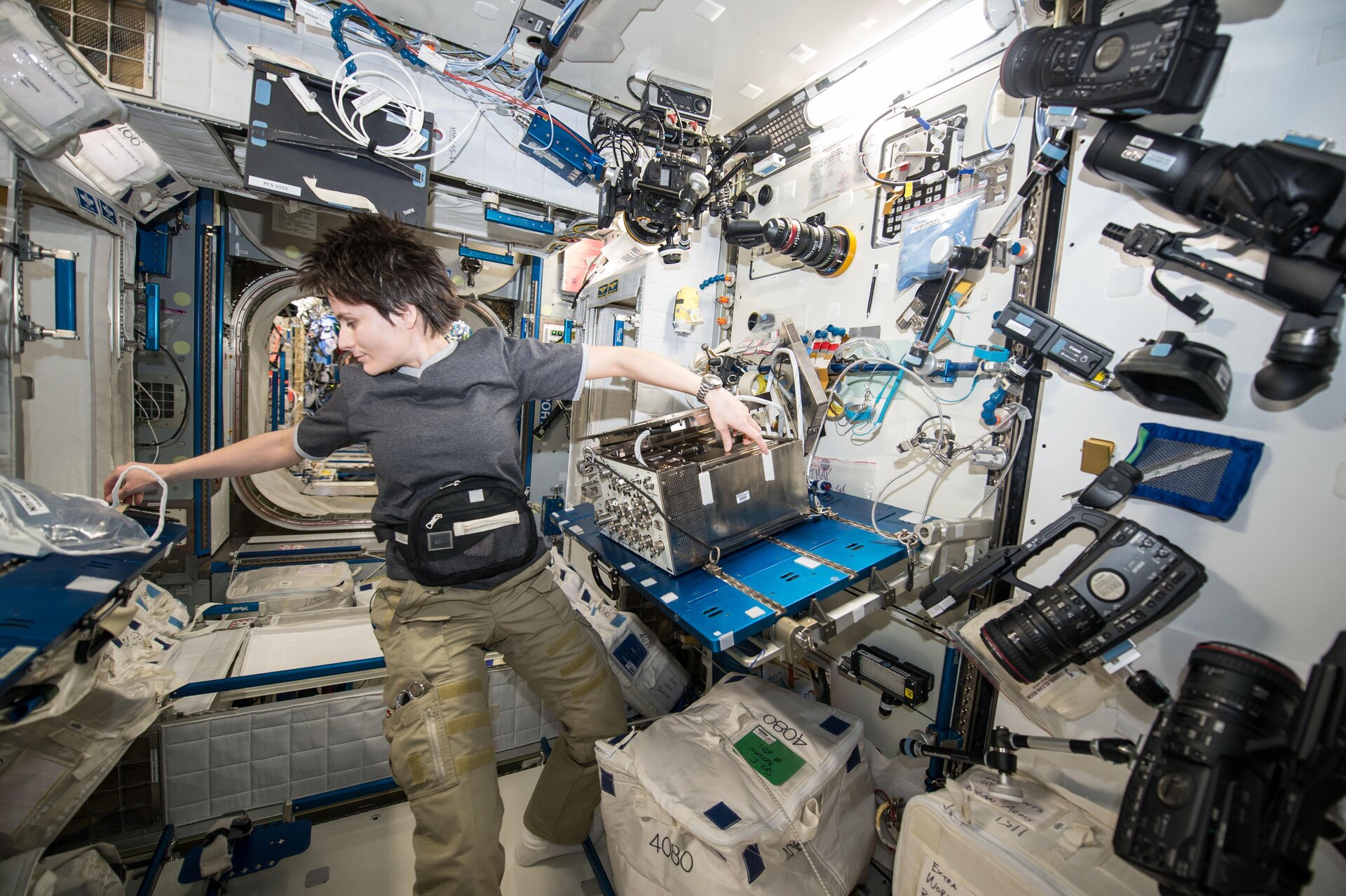 Air was pumped out of the International Space Station’s air lock for the first time in the name of science last week. Inside the cylindrical Quest airlock, ESA astronaut Samantha Cristoforetti and NASA’s Terry Virts monitored their breathing for researchers back on Earth.

With each lungful of air, our bodies absorb oxygen and exhale waste-product molecules such as carbon dioxide and the important ‘signalling’ molecule nitric oxide. The Airway Monitoring experiment looks at the amount of nitric oxide the astronauts expelled by the astronauts in the airlock.

Nitric oxide is a gas found in cigarette smoke and car exhaust, for example, and it is produced in our bodies to regulate blood vessels and act as an antibacterial agent.

Airway monitoring for space and Earth

On Earth, dust drifts to the floor where vacuum cleaners or a damp cloth remove it easily. In weightlessness, dust circulates freely and often irritates and inflames eyes and lungs.

In addition, dust on the Moon and probably Mars sticks to astronauts through static electricity and has sharp edges – all making it more likely that dust will enter astronauts’ lungs and do harm.

The Airway Monitoring experiment will test the use of nitric oxide as a tool to monitor lung inflammation as well as charting lung health in astronauts.

Four sessions will see the pair exhale into the equipment. Samantha and Terry made their first contributions before flight at NASA and ran their first space session in space in January.

On Friday, they entered the Station’s Quest airlock for their last run and reduced the pressure by 30% – equivalent to being on a mountain at 3000 m altitude.

They are the first of eight astronauts to collect data on their lungs for this experiment. It is also the first time that Quest is used for scientific purposes – the module was installed to allow astronauts to venture outside on spacewalks.

A complete view of lung health
Testing the nitric oxide diagnostic technique in space adds to the data for use on Earth. More than 300 million people suffer from asthma, so a quick and simple lung test would be of great benefit.

Lars Karlsson, lead investigator for this experiment from the Karolinska Institutet of Sweden, is hopeful that the experiment in the airlock will open up new fields of research in reduced pressure in space: “In the future, it is quite likely that drugs could be designed based on exhaled nitric oxide measurements, to find the most effective molecules to treat inflamed airways and lungs. This type of research is a first step down this road.”