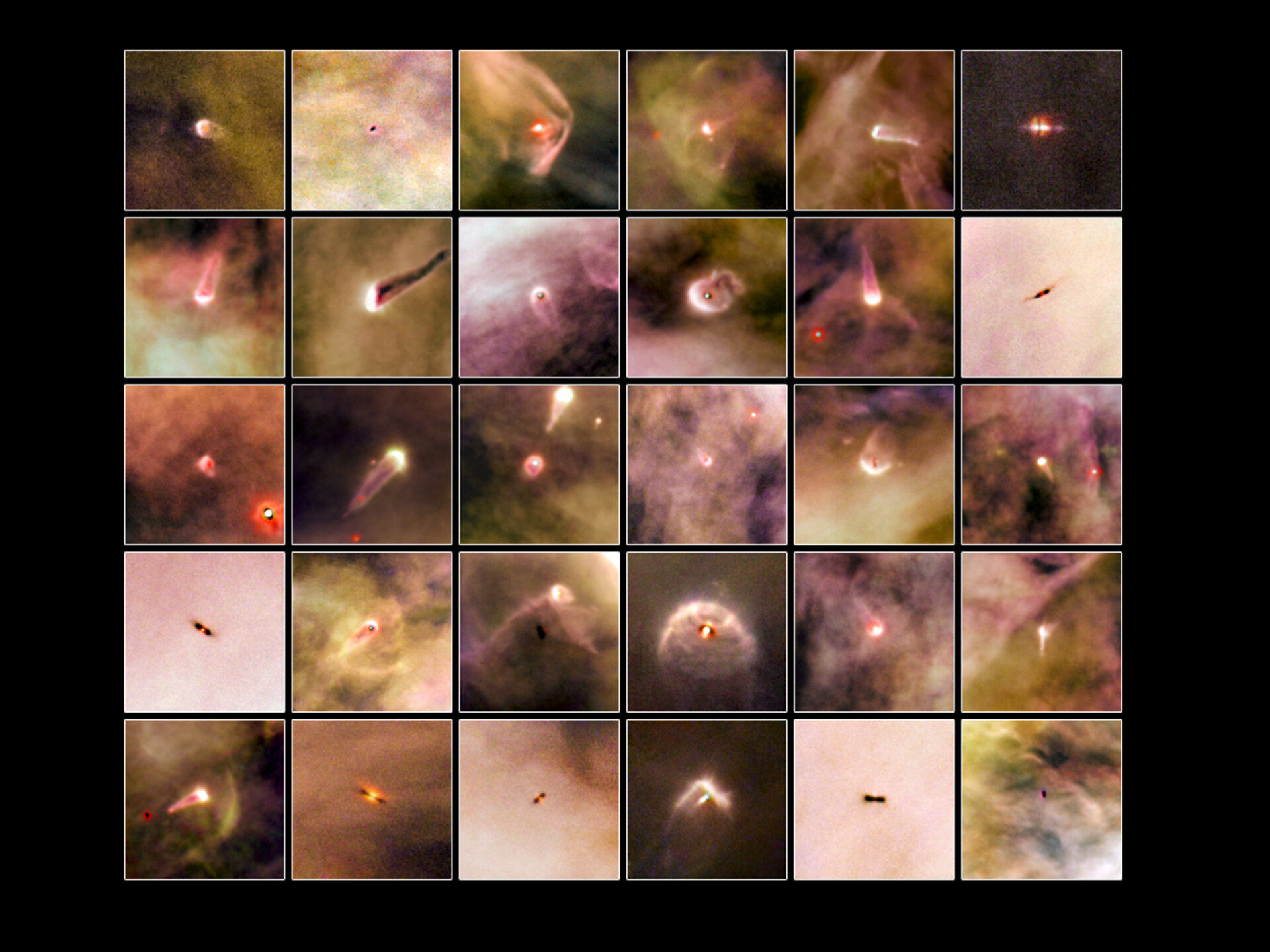 A collection of 30 never-before-released images of embryonic planetary systems in the Orion Nebula are the highlight of the longest single Hubble Space Telescope project ever dedicated to the topic of star and planet formation.

Also known as proplyds, or protoplanetary discs, these modest blobs surrounding baby stars are shedding light on the mechanism behind planet formation. Only the NASA/ESA Hubble Space Telescope, with its high resolution and sensitivity, can take such detailed pictures of circumstellar discs at optical wavelengths. Looking like a graceful watercolour painting, the Orion Nebula is one of the most photogenic objects in space and one of the Hubble Space Telescope's favourite targets. As newborn stars emerge from the nebula's mixture of gas and dust, protoplanetary discs, also known as proplyds, form around them: the centre of the spinning disc heats up and becomes a new star, but remnants around the outskirts of the disc attract other bits of dust and clump together. Proplyds are thought to be young planetary systems in the making. In an ambitious survey of the familiar nebula using Hubble's Advanced Camera for Surveys (ACS), researchers have discovered 42 protoplanetary discs.

Visible to the naked eye, the Orion Nebula has been known since ancient times, but was first described in the early 17th century by the French astronomer Nicolas-Claude Fabri de Peiresc — who is given credit for discovering it. At 1500 light-years away, the nebula, also known as Messier 42, is the closest star-forming region to Earth with stars massive enough to heat up the surrounding gas, setting it ablaze with colour, and making the region stand out to stargazers.

Within the awe-inspiring, gaseous folds of Orion, researchers have identified two different types of discs around young and forming stars: those that lie close to the brightest star in the cluster (Theta 1 Orionis C) and those farther away from it. This bright star heats up the gas in nearby discs, causing them to shine brightly. Discs that are farther away do not receive enough energetic radiation from the star to heat up the gas and so they can only be detected as dark silhouettes against the background of the bright nebula, as the dust that surrounds these discs absorbs background visible light. By studying these silhouetted discs, astronomers are better able to characterize the properties of the dust grains that are thought to bind together and possibly form planets like our own.

The brighter discs are indicated by a glowing cusp in the excited material and facing the bright star, but which we see at a random orientation within the nebula, so some appear edge on, and others face on, for instance. Other interesting features enhance the look of these captivating objects, such as emerging jets of matter and shock waves. The dramatic shock waves are formed when the stellar wind from the nearby massive star collides with the gas in the nebula, sculpting boomerang shapes or arrows or even, in the case of 181-825, a space jellyfish!

This proplyd atlas is the first scientific outcome from the HST Treasury Program on the Orion Nebula. Treasury Programs are carried out to allow scientists to conduct comprehensive studies over longer periods since time on the in-demand Hubble Space Telescope is strictly allocated. High resolution imaging of protoplanetary discs is an example of a science discovery that has led to better technology and is one of the main science cases for the Atacama Large Millimeter/submillimeter Array (ALMA), one of the largest ground-based astronomy projects of the next decade. ALMA will observe the dust at longer wavelengths, in emission (instead of in absorption as we see it at optical wavelengths) with an angular resolution up to 10 times better than that of Hubble.