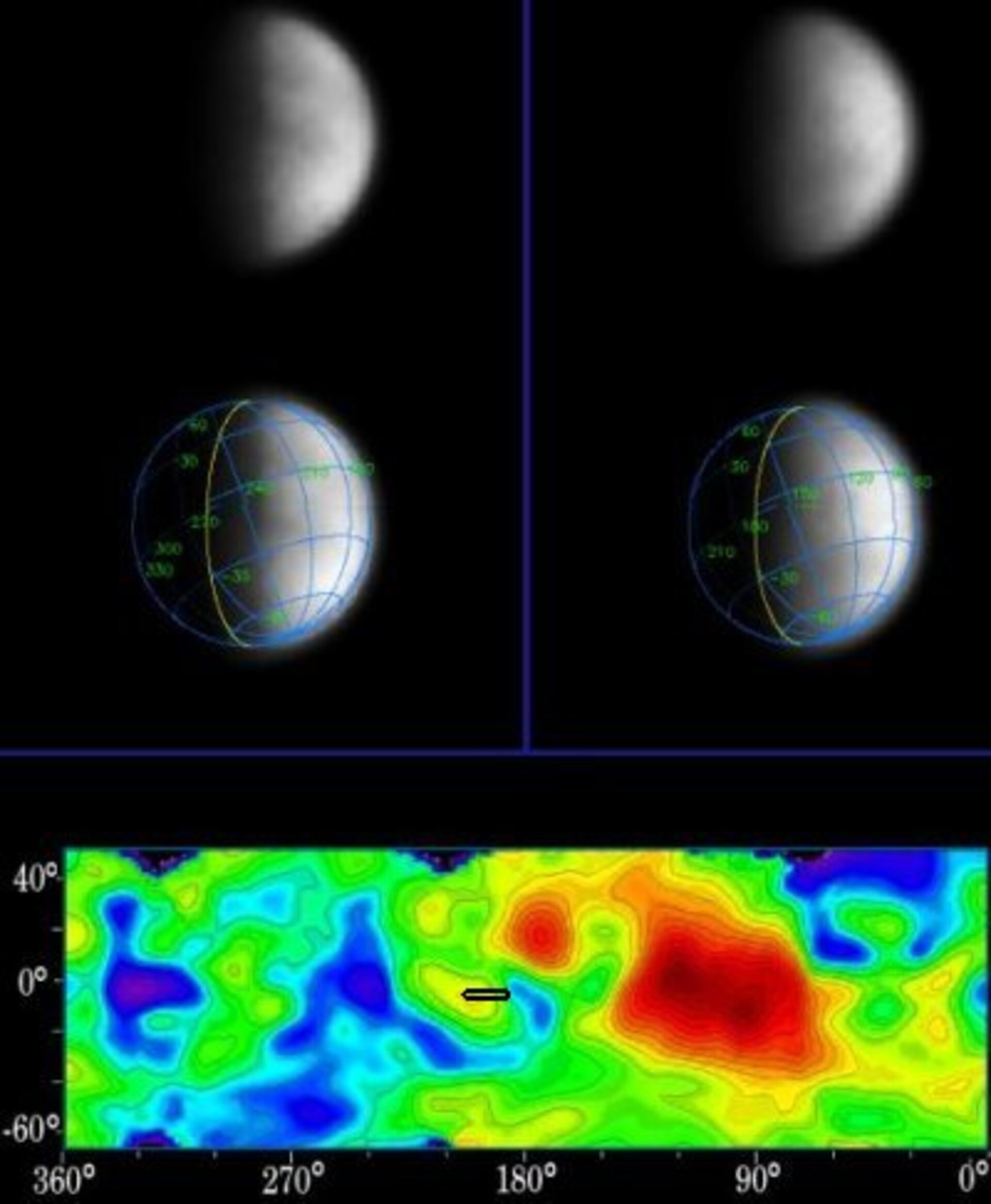 This is the eagerly awaited first glimpse by Cassini-Huygens of the surface of Titan, Saturn's most mysterious moon.

Titan is a world where scientists believe organic matter rains from hazy skies and seas of liquid hydrocarbons cover a frozen surface.

The images were taken in mid-April by the narrow angle camera on the NASA/ESA/ASI Cassini-Huygens spacecraft. Using one of the spectral filters specifically designed to penetrate the thick atmosphere, the camera can now see surface features of Titan. The resolution of this image is 230 kilometres per pixel, which now rivals the best images from Earth-based telescopes.

The two images displayed here show Titan from a vantage point 17 degrees below its equator, yielding a view from latitude 50 degrees north all the way to its south pole.

The image on the left was taken four days after the image on the right, so Titan had rotated 90 degrees in that time and the two images combined cover a region extending halfway around the moon. The observed brightness variations suggest a diverse surface, with variations in average reflectivity on scales of a couple hundred kilometres.

The superimposed grid shows the orientation of Titan as well as the geographical regions of the satellite that are illuminated and visible. The yellow curve marks the position of the boundary between day and night.

Also shown here is a map of relative surface brightness variations on Titan as measured in images taken by NASA/ESA’s Hubble Space Telescope. These images have scales of 300 kilometres per pixel. The colours indicate different surface reflectivities. From darkest to brightest, we have: deep blue (darkest), light blue, green, yellow, red and deep red (brightest).

The large continent-sized red feature is called Xanadu. It is unclear whether Xanadu is a mountain range, giant basin, smooth plain, or a combination of all three. It may be dotted with hydrocarbon lakes but that is also unknown. All that is presently known is that in Earth-based images, it is the brightest region on Titan.

Xanadu is visible as a bright region in the Cassini image on the right. The dark blue feature running from the north-west to the south-east (210°-250°W), and the bright yellow/green region to the east and southeast of it, can both be seen in the Cassini image on the left. The Huygens landing site is shown as an ellipse at longitude 188°-208°W, latitude 10.5°S (with the small uncertainty depending mainly on winds).

Note that the viewing geometry on its present approach is not the most favourable for surface viewing by Cassini-Huygens. These results are encouraging for the future in-orbit observations that will be made in more favourable conditions. Resolution is expected to improve by a factor of five over the next two months.

The first opportunity to view small-scale features (2 kilometres) on the surface of Titan comes during a fly-by at 350 000 kilometres over Titan's south pole on 2 July 2004, only 30 hours after the Cassini orbiter’s insertion into orbit around the ringed planet.

The Cassini-Huygens mission is a co-operative project of NASA, ESA and the Italian Space Agency (ASI).