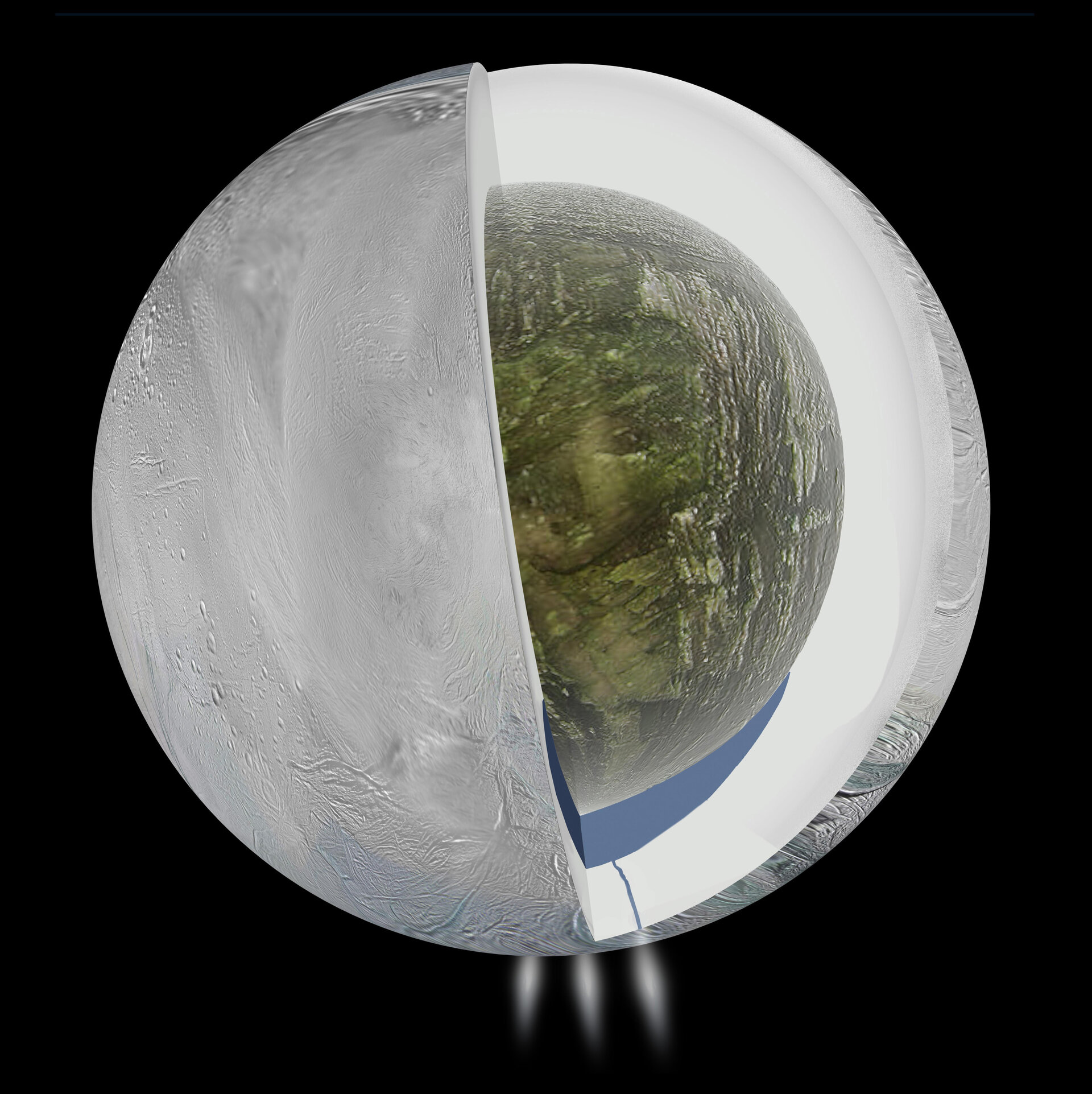 Saturn’s icy moon Enceladus has an underground sea of liquid water, according to the international Cassini spacecraft.

Understanding the interior structure of 500 km-diameter Enceladus has been a top priority of the Cassini mission since plumes of ice and water vapour were discovered jetting from ‘tiger stripe’ fractures at the moon’s south pole in 2005.

Subsequent observations of the jets showed them to be relatively warm compared with other regions of the moon and to be salty – strong arguments for there being liquid water below the surface.

But planetary scientists have now been able to investigate the interior of the enigmatic moon directly, using Cassini’s radio science experiment.

During the flybys, Cassini was pulled slightly off course by the moon’s gravity, changing its velocity by just 0.2–0.3 millimetres per second.

As tiny as these deviations were, they were detectable in the spacecraft’s radio signals as they were beamed back to Earth, providing a measurement of how the gravity of Enceladus varied along the spacecraft’s orbit. These measurements could then be used to infer the distribution of mass inside the moon.

For example, a higher-than-average gravity ‘anomaly’ might suggest the presence of a mountain, while a lower-than-average reading implies a mass deficit.

On Enceladus, the scientists measured a negative mass anomaly at the surface of the south pole, accompanied by a positive one some 30-40 km below.

“By analysing the spacecraft’s motion in this way, and taking into account the topography of the moon we see with Cassini’s cameras, we are given a window into the internal structure of Enceladus,” says Luciano Iess, lead author of the results published in Science.

“The perturbations in the spacecraft’s motion can be most simply explained by the moon having an asymmetric internal structure, such that an ice shell overlies liquid water at a depth of around 30–40 km in the southern hemisphere.”

While the gravity data cannot rule out a global ocean, a regional sea extending from the south pole to 50ºS latitude is most consistent with the moon’s topography and high local temperatures observed around the tiger stripes.

“This experiment provides a crucial new piece of information towards understanding the formation of plumes on this intriguing moon,” says Nicolas Altobelli, ESA’s Cassini project scientist.

“The gravity field and interior structure of Enceladus,” by L. Iess et al, is published in Science, 4 April 2014.