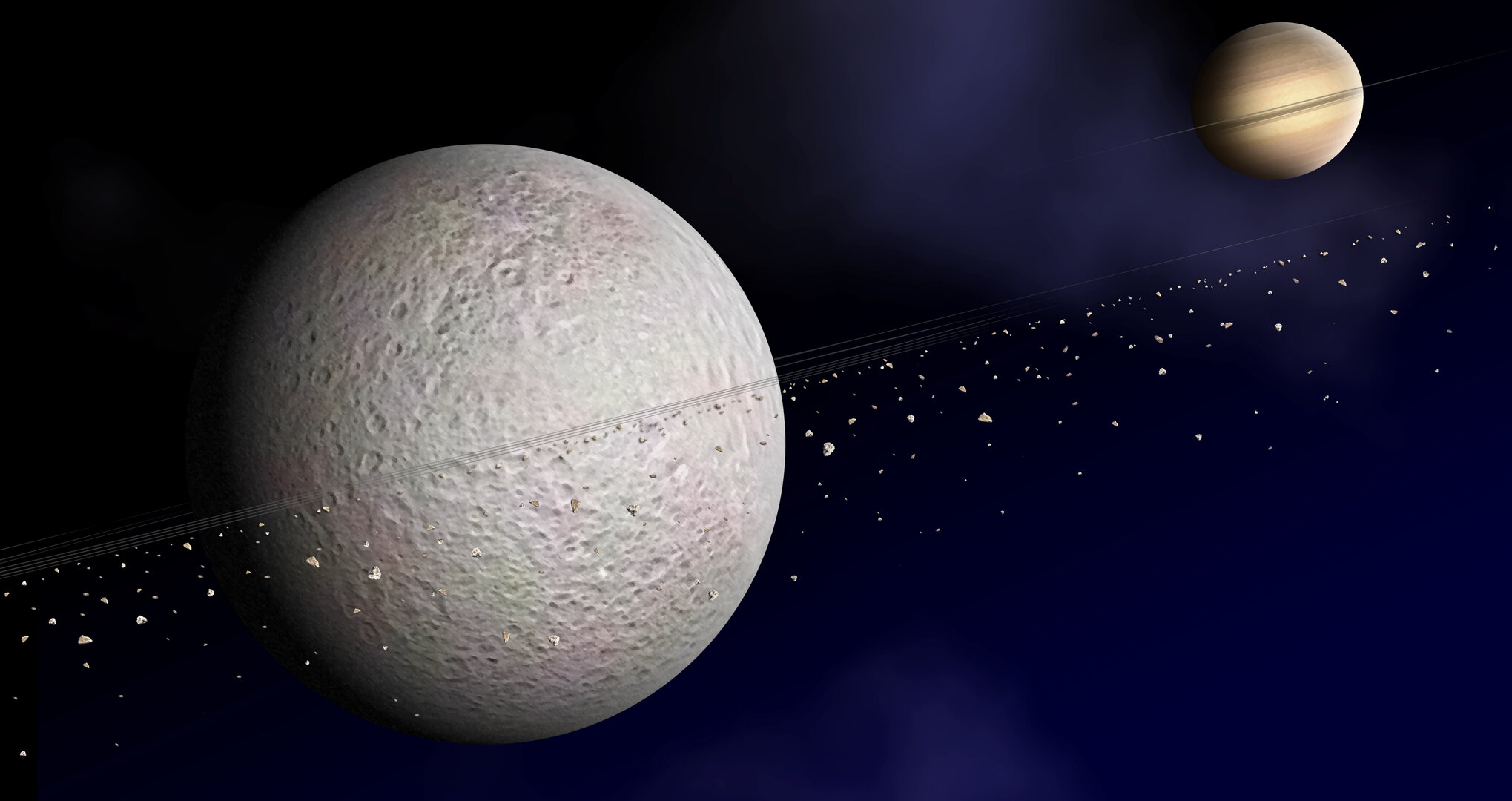 The Cassini spacecraft has found evidence of material orbiting Rhea, Saturn's second largest moon. This is the first time rings may have been found around a moon.

A broad debris disc and at least one ring appear to have been detected by a suite of six instruments on Cassini specifically designed to study the atmospheres and particles around Saturn and its moons.

"Until now, only planets were known to have rings, but now Rhea seems to have some family ties to its ringed parent Saturn," said Geraint Jones, a Cassini scientist and lead author on a paper that appears in today’s issue of the journal Science. Jones began this work while at the Max Planck Institute for Solar System Research, Katlenburg-Lindau, Germany, and is now at the Mullard Space Science Laboratory, University College London, UK.

Rhea is roughly 1500 km in diameter. The apparent debris disc measures several thousand kilometers from end to end. The particles that make up the disc and any embedded rings probably range from the size of small pebbles to boulders. An additional dust cloud may extend up to 5900 km from the moon’s centre, almost eight times the radius of Rhea.

"Like finding planets around other stars, and moons around asteroids, these findings are opening a new field of rings around moons," said Norbert Krupp, a scientist with Cassini’s Magnetospheric Imaging Instrument from the Max Planck Institute for Solar System Research.

Like finding planets around other stars, and moons around asteroids, these findings are opening a new field of rings around moons

Since the discovery, Cassini scientists have carried out numerical simulations to determine if Rhea can maintain rings. The models show that Rhea’s gravity field, in combination with its orbit around Saturn, could allow rings that form to remain in place for a very long time.

The discovery was a result of a Cassini close fly-by of Rhea in November 2005, when instruments on the spacecraft observed the environment around the moon. Three instruments sampled dust directly. The existence of some debris was expected because a rain of dust constantly hits Saturn's moons, including Rhea, knocking particles into space around them. Other instruments’ observations showed how the moon was interacting with Saturn's magnetosphere, and ruled out the possibility of an atmosphere.

Evidence for a debris disc in addition to this tenuous dust cloud came from a gradual drop on either side of Rhea in the number of electrons detected by two of Cassini's instruments. Material near Rhea appeared to be shielding Cassini from the usual rain of electrons. Cassini's Magnetospheric Imaging Instrument detected sharp, brief drops in electrons on both sides of the moon, suggesting the presence of rings within the disc of debris. The rings of Uranus were found in a similar fashion, by NASA's Kuiper Airborne Observatory in 1977, when light from a star blinked on and off as it passed behind Uranus' rings.

"Seeing almost the same signatures on either side of Rhea was the clincher," added Jones. "After ruling out many other possibilities, we said these are most likely rings. No one was expecting rings around a moon."

One possible explanation for these rings is that they are remnants from an asteroid or comet collision in Rhea's distant past. Such a collision may have pitched large quantities of gas and solid particles around Rhea. Once the gas dissipated, all that remained were the ring particles. Other moons of Saturn, such as Mimas, show evidence of a catastrophic collision that almost tore the moon apart.

"The diversity in our Solar System never fails to amaze us," said Candy Hansen, co-author and Cassini scientist on the Ultraviolet Imaging Spectrograph at NASA's Jet Propulsion Laboratory (JPL), USA. "Many years ago we thought Saturn was the only planet with rings. Now we may have a moon of Saturn that is a miniature version of its even more elaborately decorated parent."

These ring findings make Rhea a prime candidate for further study. Initial observations by the imaging team when Rhea was near the sun in the sky did not detect dust near the moon remotely. Additional observations are planned to look for the larger particles.

These findings have been reported in ‘The Dust Halo of Saturn's Largest Icy Moon, Rhea’ by Jones et al. in today’s issue of Science.

The Cassini-Huygens mission is a cooperative project of NASA, the ESA and the Italian Space Agency. JPL, a division of the California Institute of Technology in Pasadena, USA, manages the Cassini-Huygens mission for NASA's Science Mission Directorate, Washington. The Cassini orbiter was designed, developed and assembled at JPL. ESA developed the Huygens Titan probe, while ASI managed the development of the high-gain antenna and the other instruments of its participation.

The Magnetospheric Imaging Instrument was designed, built and is operated by an international team led by the Applied Physics Laboratory of the Johns Hopkins University, USA.