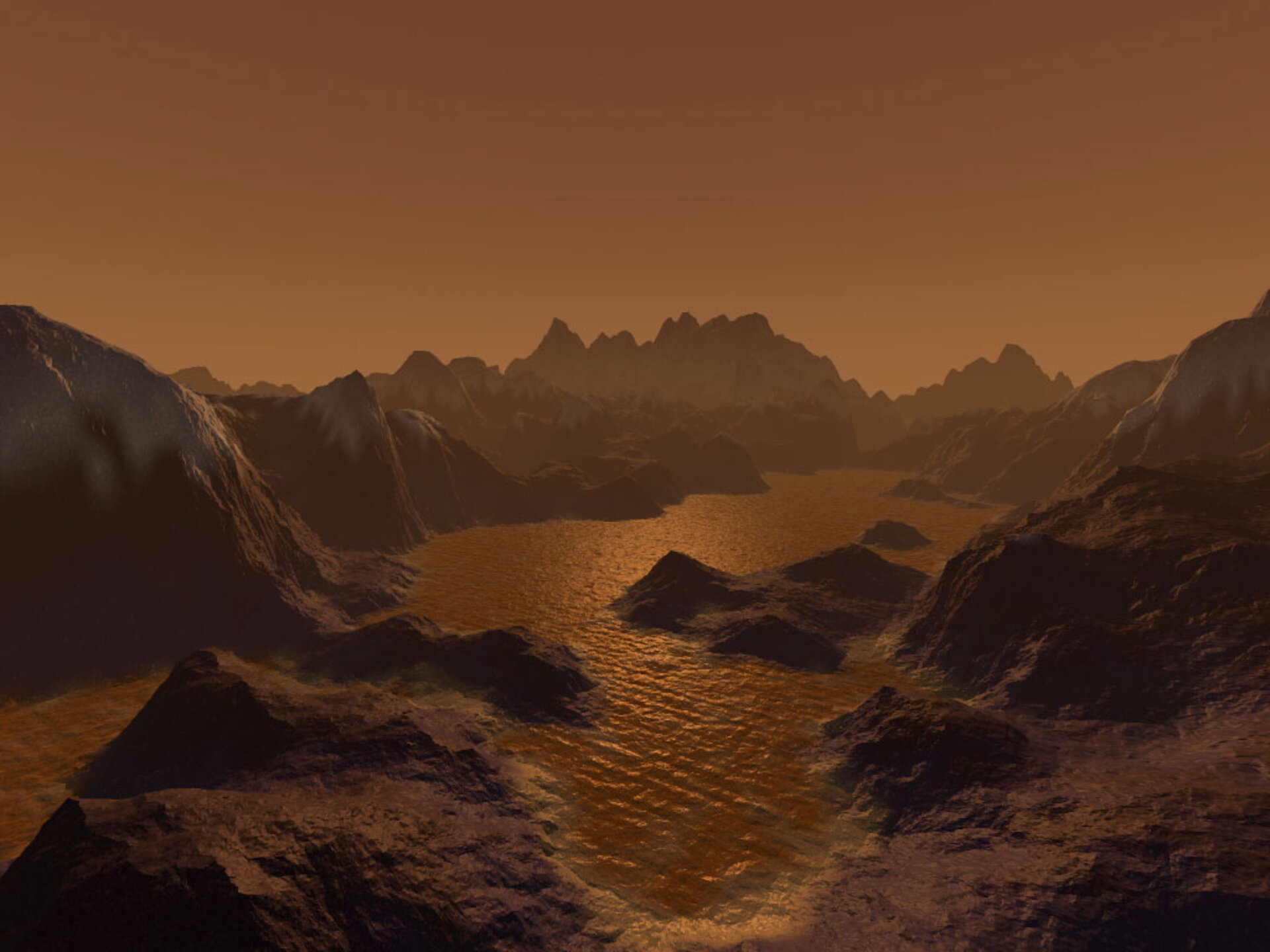 Saturn’s orange moon Titan has hundreds of times more liquid hydrocarbons than all the known oil and natural gas reserves on Earth, according to new Cassini data. The hydrocarbons rain from the sky, collecting in vast deposits that form lakes and dunes.

The new findings from the study led by Ralph Lorenz, Cassini radar team member from the Johns Hopkins University Applied Physics Laboratory, USA, are reported in the 29 January 2008 issue of the Geophysical Research Letters.

"Titan is just covered in carbon-bearing material—it’s a giant factory of organic chemicals," said Lorenz. “This vast carbon inventory is an important window into the geology and climate history of Titan.”

At a balmy minus 179º C , Titan is a far cry from Earth. Instead of water, liquid hydrocarbons in the form of methane and ethane are present on the moon's surface, and tholins probably make up its dunes. The term ‘tholins’ was coined by Carl Sagan in 1979 to describe the complex organic molecules at the heart of prebiotic chemistry.

Cassini has mapped about 20% of Titan's surface with radar. Several hundred lakes and seas have been observed, with each of several dozen estimated to contain more hydrocarbon liquid than Earth's oil and gas reserves. The dark dunes that run along the equator contain a volume of organics several hundred times larger than Earth's coal reserves.

Proven reserves of natural gas on Earth total 130 thousand million tons, enough to provide 300 times the amount of energy the entire United States uses annually for residential heating, cooling and lighting. Dozens of Titan's lakes individually have the equivalent of at least this much energy in the form of methane and ethane.

"This global estimate is based mostly on views of the lakes in the northern polar regions. We have assumed the south might be similar, but we really don’t yet know how much liquid is there," said Lorenz. Cassini's radar has observed the south polar region only once, and only two small lakes were visible. Future observations of that area are planned during Cassini’s proposed extended mission.

Scientists estimated Titan's lake depth by making some general assumptions based on lakes on Earth. They took the average area and depth of lakes on Earth, taking into account the nearby surroundings, like mountains. On Earth, the lake depth is often 10 times less than the height of nearby terrain.

"We also know that some lakes are more than 10 m or so deep because they appear literally pitch-black to the radar. If they were shallow we'd see the bottom, and we don't," said Lorenz.

The question of how much liquid is on the surface is an important one because methane is a strong greenhouse gas on Titan as well as on Earth, but there is much more of it on Titan. If all the observed liquid on Titan is methane, it would only last a few million years, because as methane escapes into Titan's atmosphere, it breaks down and escapes into space. If the methane were to run out, Titan could become much colder. Scientists believe that methane might be supplied to the atmosphere by venting from the interior in cryovolcanic eruptions. If so, the amount of methane, and the temperature on Titan, may have fluctuated dramatically in Titan’s past.

“We are carbon-based life, and understanding how far along the chain of complexity towards life that chemistry can go in an environment like Titan will be important in understanding the origins of life throughout the universe,” added Lorenz.

Cassini's next radar flyby of Titan is on 22 February 2008, when the radar instrument will observe the landing site of ESA’s Huygens probe.

The Cassini-Huygens mission is a cooperative project of NASA, ESA and the Italian Space Agency (ASI).

The Jet Propulsion Laboratory (JPL), a division of the California Institute of Technology, manages the Cassini-Huygens mission for NASA's Science Mission Directorate. JPL designed, developed and assembled the Cassini orbiter. ESA developed the Huygens Titan probe, while ASI managed the development of the high-gain antenna and the other instruments of its participation. The radar instrument was built by JPL and the Italian Space Agency, working with team members from the United States and several European countries.