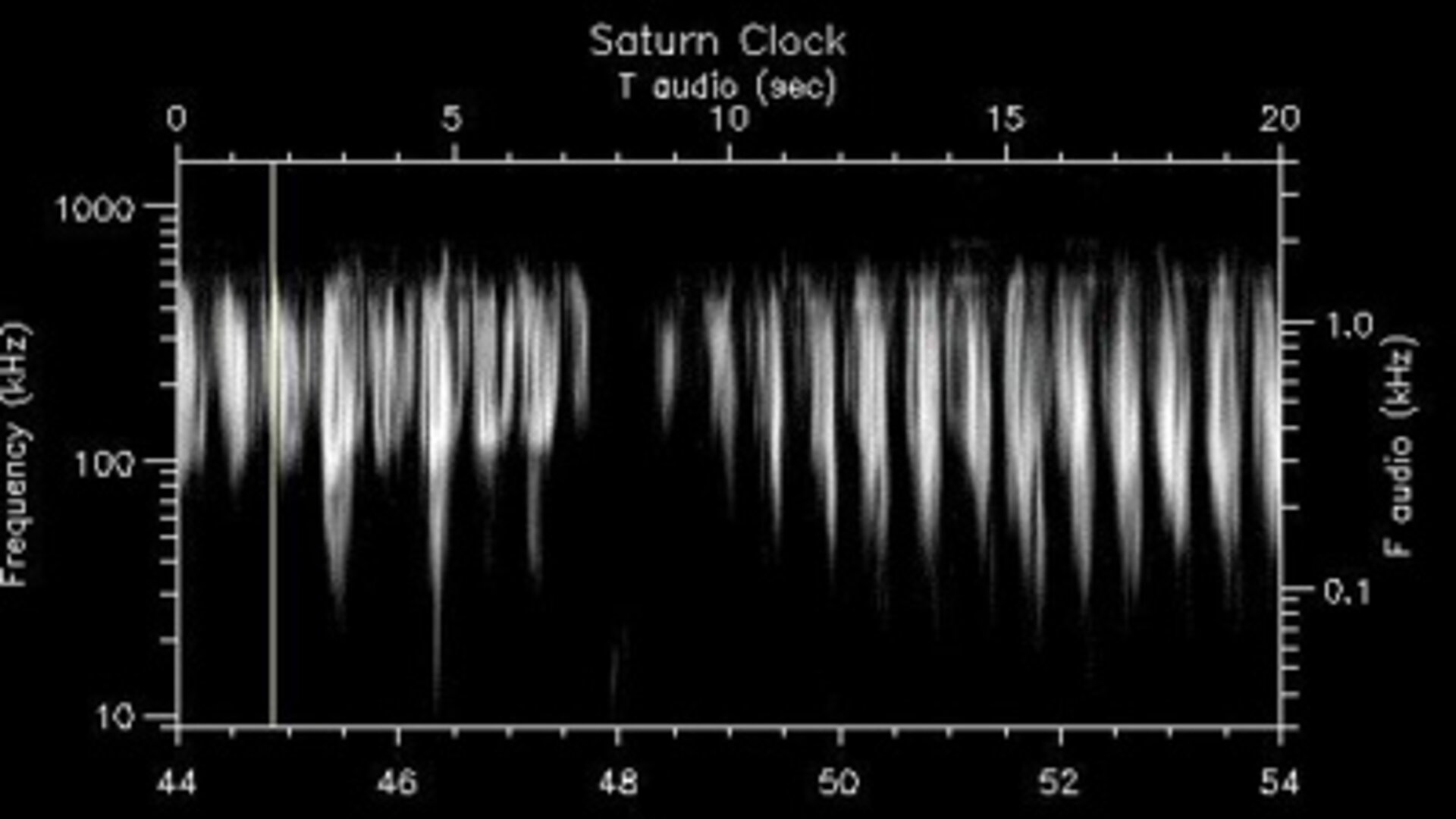 Somewhere deep below Saturn’s cloud tops, the planet rotates at a constant speed. Determining this interior period of rotation has proven extremely complicated. Now, with new Cassini results, a team of European scientists have taken an important step forward.

The results, published in Nature, are based on data from the Radio and Plasma Wave Science instrument on Cassini.

When confronted with determining the length of a day on one of the gas giant planets, planetary scientists have a difficult time. The interior of the planet is masked completely by the clouds in the upper atmosphere. So to measure the internal rotation of the planet, planetary scientists need a property that is associated with the interior and yet is observable from space. It proves to be radio emission.

This method proved successful at the gas giant Jupiter, which rotates in 9 hours and 55 minutes. This period has remained stable to one part in a million for 20 years.

Using nine months worth of data from NASA’s Voyager spacecraft, which flew past the planet during the 1980s, planetary scientists calculated Saturn’s rotation period to be 10 hours 39 minutes 24 seconds, with an uncertainty of 7 seconds.

Repeating the measurement over 15 years later, the Ulysses spacecraft discovered that Saturn’s period of radio emission varied and most recently, the Cassini spacecraft found the planet apparently rotating in 10 hours 45 minutes 45 seconds, with an uncertainty of 36 seconds.

It is inconceivable that a planet could have slowed down by 6 minutes in a few decades. As well as this long-period variation, Cassini’s near continuous observations have also shown that the rotation rate seemed to vary by as much as one percent in a week.

Planetary scientists concluded that something must be affecting the emission of radio waves from Saturn, rather than the rotation of the planet itself. Two models were forwarded to explain the variations in the radio emission period.

Firstly, that the wind of electrically charged particles given off by the Sun, the so-called solar wind, impacted the magnetic field, causing the radio emission to vary due to the variation of the solar wind speed. Secondly, particles from the geysers on Saturn’s icy moon Enceladus were affecting the magnetic field, causing it to drag around Saturn.

Now, after further careful analysis, Cassini’s data strongly implicates the solar wind as the source of at least some of the radio period variation. It shows that there is a characteristic variation in the behaviour of the short-period radio emission every 25 days.

“This immediately points to the Sun because it is the rotation rate of the Sun as seen from Saturn,” says Philippe Zarka, CNRS, Observatoire de Paris, France, who led the research.

Zarka and colleagues analysed the properties of the solar wind and found that the speed variation of the wind is probably responsible. It does not vary completely randomly but instead follows a saw-tooth pattern, first building up in speed and then suddenly slowing down. Their analysis of this behaviour showed that it could induce the observed short period variation in the radio data period.

The work is not finished yet because the long-period variation must still be explained. This may be down to Enceladus. “The two phenomena could be superimposed upon each other,” says Zarka.

The team is now seeing if they can remove the effects of the solar wind and deduce the true rotation rate of Saturn, a key piece of information to understand Saturn’s atmosphere and interior.

Knowledge of the planet’s true rotation rate will allow planetary scientists to compare observations taken years apart and calculate the true wind speeds on the planet. Ultimately, the speed of rotation of the planet is linked to the way material is distributed inside the vast globe and so is a clue to the formation of the planet.

“If we can find the true value for Saturn’s rotation then we have it for once and for all,” says Zarka.

The results appear in, ‘Modulation of Saturn's radio clock by solar wind speed’ by P. Zarka, L. Lamy, B. Cecconi, R. Prangé and H. Rucker, published in Nature, on 8 November 2007. The results are also being presented today at the fall meeting of the American Geophysical Union, in San Francisco, USA.

The Jet Propulsion Laboratory (JPL), a division of the California Institute of Technology, manages the Cassini-Huygens mission for NASA's Science Mission Directorate. JPL designed and assembled the Cassini orbiter. ESA developed the Huygens Titan probe, while ASI managed the development of the high-gain antenna and the other instruments of its participation.