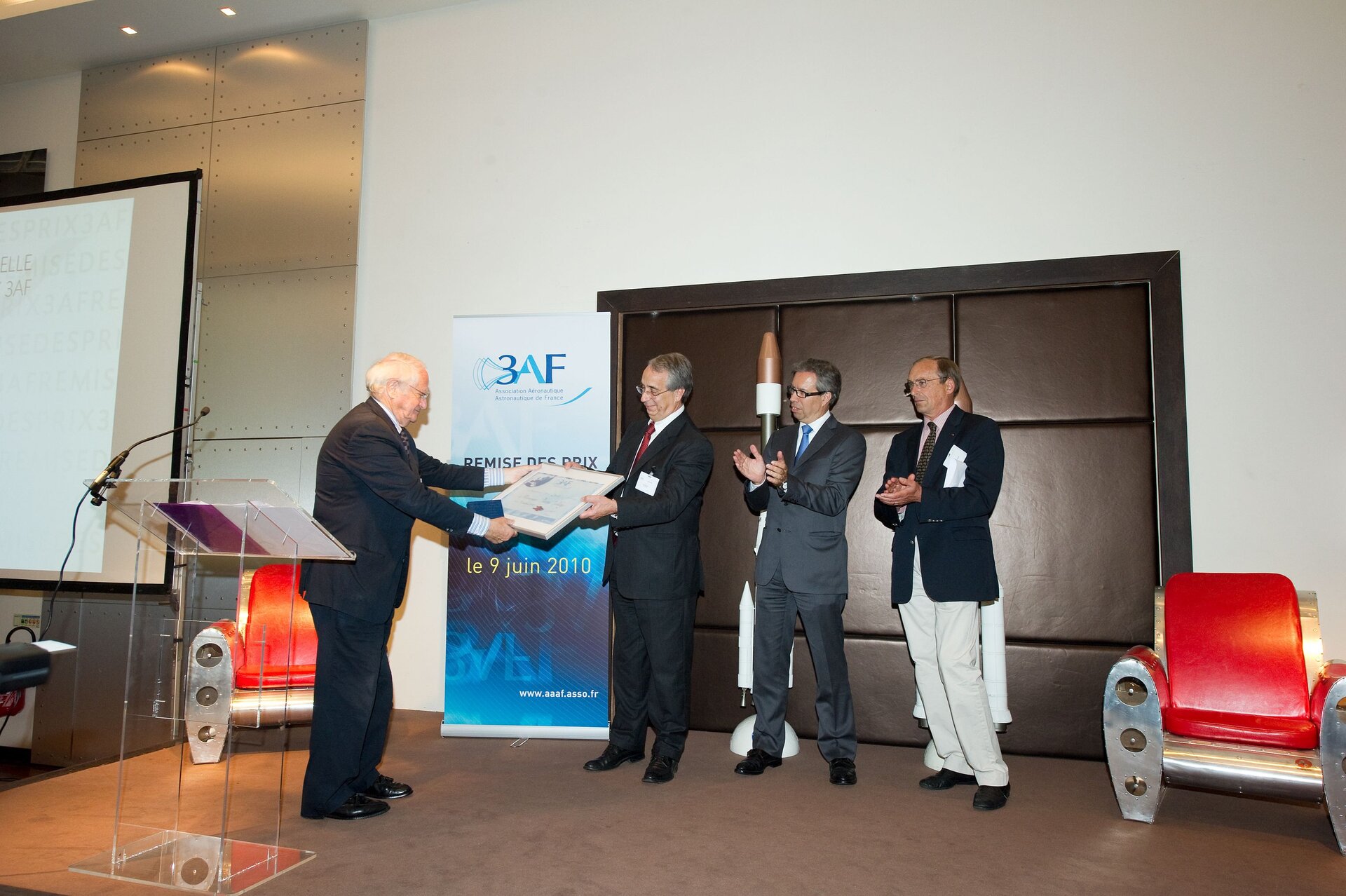 Yesterday in Paris, ESA’s Herschel and Planck science missions were honoured by the French Association for Aeronautics and Astronautics. The association’s Grand Prix 2010 award for “outstanding space endeavours” was bestowed upon these groundbreaking missions.

Every year, the French Association for Aeronautics and Astronautics (AAAF) dedicates awards to those who have demonstrated true success and made significant advances. This year, the teams responsible for ESA’s Herschel and Planck missions have been honoured by the AAAF jury.

To receive this award, which recognises more than 20 years of work in research and development in bringing these outstanding missions to fruition, ESA officials gathered at the Salons de l’Aéro-Club de France, Paris, on 9 June 2010 at 17.00 CEST.

The Herschel and Planck spacecraft are giant leaps forward in science and engineering. “As with any great engineering project, it was a challenge not only to ESA’s scientific and technical staff, and scientific teams across Europe but also to teams from industry across Europe led by Thales Alenia Space who took on the prime engineering task a decade ago,” says David Southwood, Director of Science and Robotic Exploration at ESA. “It has been a great adventure for everyone involved with heights of great elation but also plenty of the nightmares that implementing cutting-edge technology can always throw up. Now the proof of the quality of the work and the worth of the effort is in the tremendous new science now emerging from the two missions.”

Planck is studying the ‘echo’ of the Big Bang, mapping the subtle ripples in the microwaves that bathe space. The instruments are so precise Planck is expected to take the best pictures that are physically possible of this microwave radiation.

"Planck is being operated and its data processed by large teams of engineers and scientists. This team award is very much appreciated by all the individuals and the organisations they represent," says Jan Tauber, Project Scientist for Planck at ESA.

Scientists recently gathered at ESA’s ESTEC centre in the Netherlands, filling a week-long conference with back-to-back talks on the scientific results that have come from Herschel’s first year in orbit.

The first images of the whole sky as seen by Planck are due for release in the coming weeks, and the mission has already revealed extraordinary filaments of dust threading through our own Galaxy.

This is just the beginning for Herschel and Planck. Both missions will run for several more years. Even after they retire, the analysis will continue. It will take decades to extract all of the scientific juice from these observational fruits.

“These two extraordinary missions are set to revolutionise our view of the far-infrared and millimetre wavelength sky, combining to yield important new results about baby stars and planets still forming today in the Milky Way, and stretching all the way back to the birth of the Universe itself, more than 13 billion years ago,” says Mark McCaughrean, Head of the Research and Scientific Support Department at ESA.