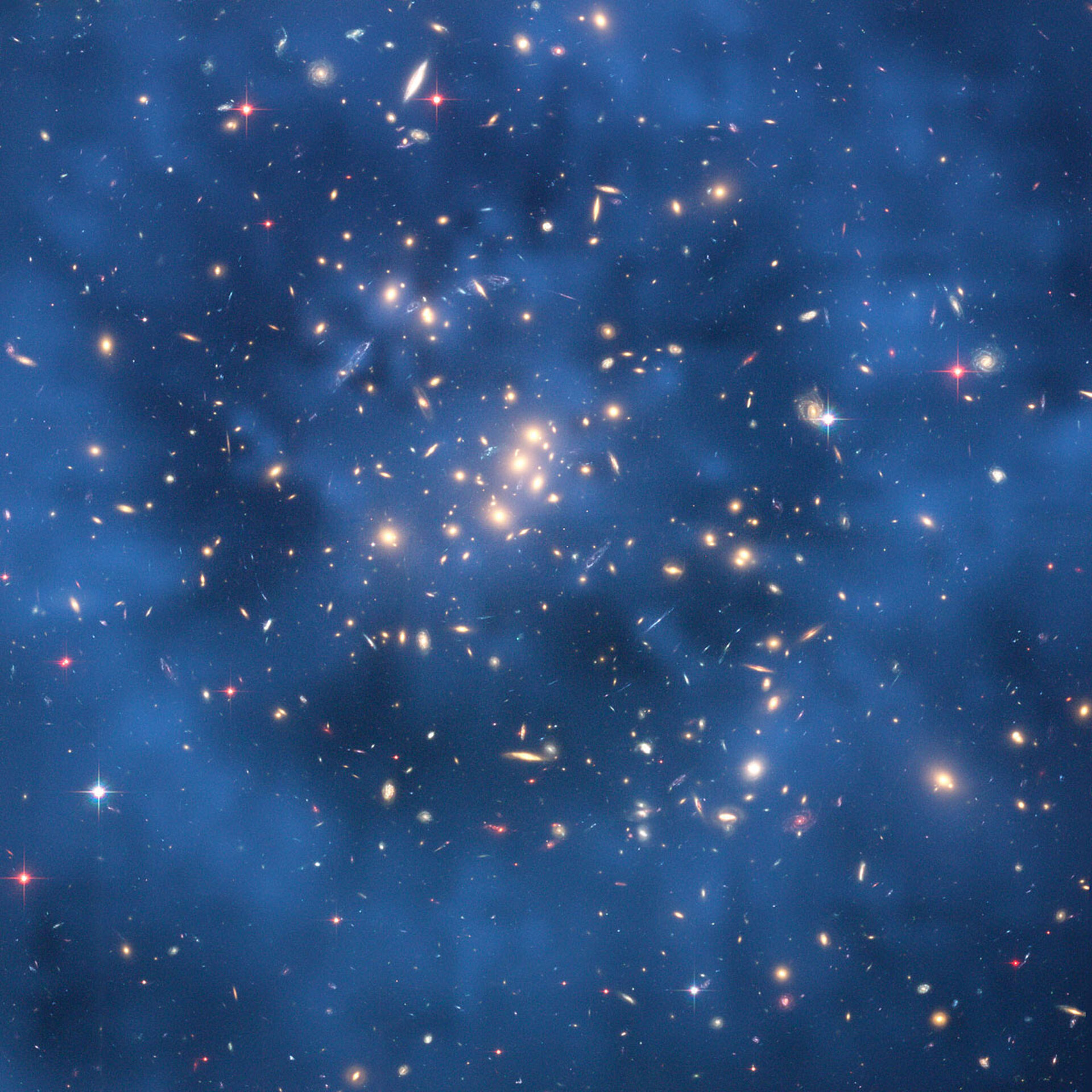 A team of astronomers used the Hubble Space Telescope to find the best evidence yet for the existence of dark matter, present in the form of a ghostly ring in a galaxy cluster.

The ring had formed long ago during a titanic collision between two massive galaxy clusters.

The team’s discovery, to be published on 1 June 2007 in the Astrophysical Journal, represents the first record of dark matter distribution that differs substantially from the distribution of ordinary matter.

The cluster ZwCl0024+1652 (referred to as Cl 0024+17 in the publication) is located 5 thousand million light-years away from Earth. The ring, which measures 2.6 million light-years across, was found unexpectedly while the team was mapping the distribution of dark matter within the cluster.

Astronomers have long suspected invisible dark matter to be the source of additional gravity that holds galaxy clusters together. If galaxy clusters relied only on the gravity from their visible stars as the binding force, the clusters would fly apart.

Although it is not known what dark matter is made of, it is hypothesised that it is made of a type of elementary particle that pervades the Universe.

"This is the first time we have detected dark matter with a unique structure, different from that of the gas and galaxies in the cluster," said astronomer M. James Jee of Johns Hopkins University, USA, a member of the team that spotted the dark matter ring.

"Although the invisible matter has been found before in other galaxy clusters, dark matter has never been detected to be so largely separated from the hot gas and the galaxies that make up galaxy clusters," Jee continued. “By seeing a dark matter structure that is not traced by galaxies and hot gas, we can study how differently it behaves from normal matter.”

During the team’s analysis of the dark matter, they noticed a ripple in the mysterious substance, somewhat like the ripples created in a pond from a stone plopping into the water.

"I was initially annoyed to see the ring because I thought it was an artefact, which would have implied a flaw in the data reduction," Jee explained. "Even after many iterations of the data, I couldn't believe my result. I've looked at a number of clusters and I haven't seen anything like this before."

Curious about why the ring was in the cluster and how it had formed, Jee found previous research that suggested that the cluster had collided with another cluster one to two thousand million years ago.

The research, published in 2002 by Oliver Czoske of the Argelander-Institut für Astronomie at Bonn University, was based on spectroscopic observations of the cluster’s 3D structure. The study revealed two distinct groupings of galaxy clusters, indicating a collision between both clusters.

Astronomers have a head-on view of the collision because it accidentally occurred along Earth’s line of sight. From this perspective, the dark-matter structure looks like a ring.

The team created computer simulations showing what happens when galaxy clusters collide. As the two clusters smash together, the dark matter falls to the centre of the combined cluster and sloshes back out. As the dark matter moves outward, it begins to slow down under the pull of gravity and pile up, like cars bunched up on a highway.

"By studying this collision, we are seeing how dark matter responds to gravity," said team member Holland Ford, also of Johns Hopkins University. "Nature is performing an experiment for us that we cannot do in a lab, and it agrees with our theoretical models."

Tracing it is not an easy task, because it does not shine or reflect light. Its influence can be detected by its gravitational effects on light. To locate dark matter, astronomers study how faint light from more distant galaxies is distorted or bent into arcs and streaks by the gravity of the dark matter in the foreground. This technique is called gravitational lensing. By mapping the distorted light, the mass of the cluster and the distribution of dark matter can be deduced.

"The collision between the two galaxy clusters created a ripple of dark matter which left distinct footprints in the shapes of the background galaxies," Jee explained.

"It is comparable to looking at pebbles on the bottom of a pond with ripples on the surface. The shape of the pebble appears to change as the ripples pass over them. In a similar manner, galaxies behind the ring show changes in their shape due to the presence of the dense ring."

Jee and his colleagues used Hubble’s Advanced Camera for Surveys to detect the faint, distorted, faraway galaxies behind the cluster that cannot be resolved with ground-based telescopes. "Hubble's exquisite images and unparalleled sensitivity to faint galaxies make it the only suitable tool for this measurement," said team member Richard White of the Space Telescope Science Institute, USA.

Previous observations of another cluster, the Bullet Cluster, with Hubble and the Chandra X-ray Observatory, presented a sideways view of a similar encounter between two galaxy clusters. In that collision, the dark matter was pulled away from the hot cluster gas, but the dark matter still followed the distribution of cluster galaxies.

ZwCl0024+1652 is the first cluster to show a dark matter distribution that differs significantly from the distribution of both the galaxies and the hot gas.

The team's paper, by M.J. Jee, H. Ford (Johns Hopkins University) et al., will appear in the 1 June 2007 issue of the Astrophysical Journal.