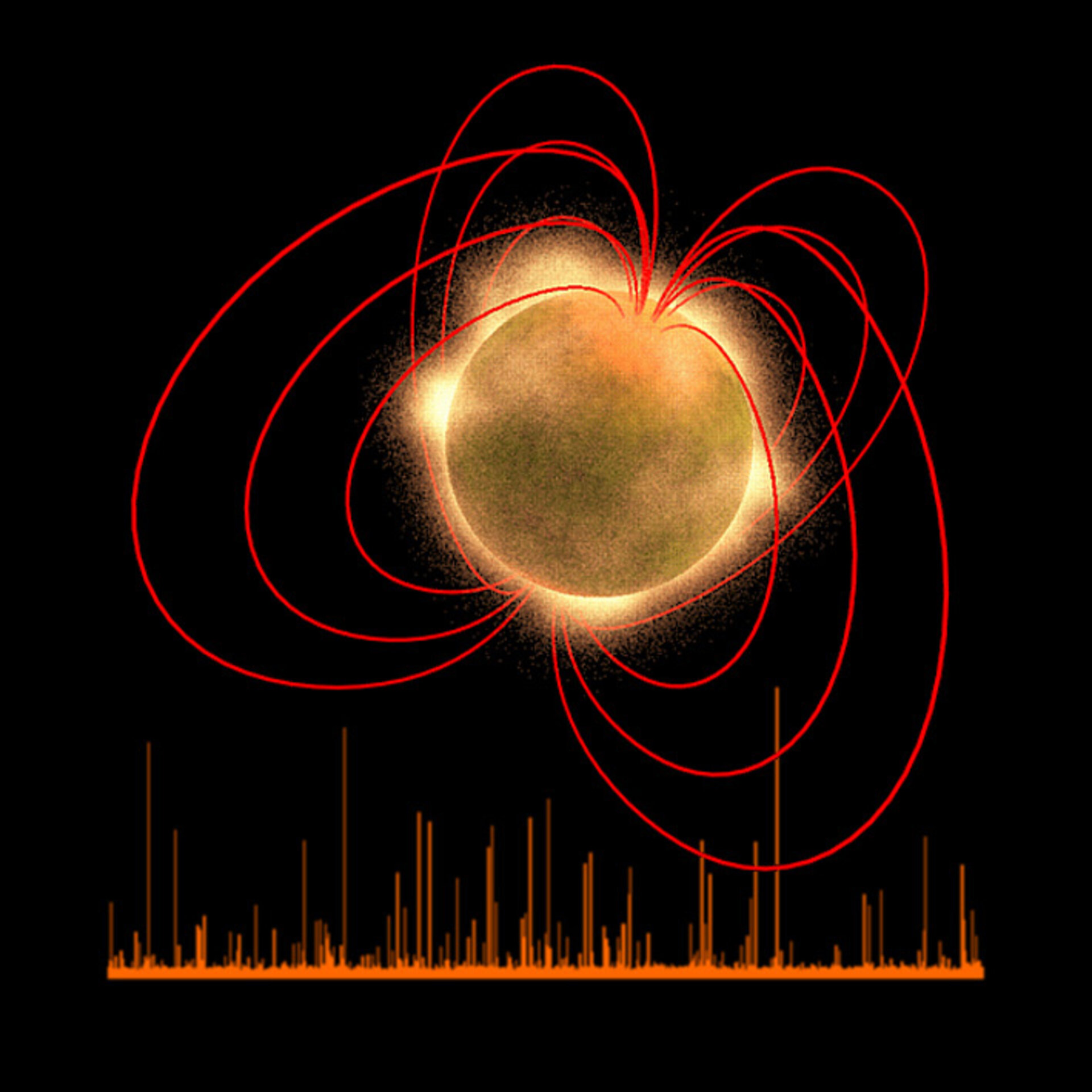 An enormous eruption has found its way to Earth after travelling for many thousands of years across space. Studying this blast with ESA’s XMM-Newton and Integral space observatories, astronomers have discovered a dead star belonging to a rare group: the magnetars.

X-Rays from the giant outburst arrived on Earth on 22 August 2008, and triggered an automatic sensor on the NASA-led, international Swift satellite. Just twelve hours later, XMM-Newton zeroed in and began to collect the radiation, allowing the most detailed spectral study of the decay of a magnetar outburst.

The outburst lasted for more than four months, during which time hundreds of smaller bursts were measured. Nanda Rea from the University of Amsterdam led the team that performed the research. “Magnetars allow us to study extreme matter conditions that cannot be reproduced on Earth,” she says.

Magnetars are the most intensely magnetised objects in the Universe. Their magnetic fields are some million times stronger than Earth’s. If a magnetar were to magically appear at half the Moon’s distance from Earth, its magnetic field would wipe the details off every credit card on Earth.

This particular magnetar, known as SGR 0501+4516, is estimated to lie about light-years away, and was undiscovered until its outburst gave it away. An outburst takes place when the unstable configuration of the magnetic field pulls the magnetar’s crust, allowing matter to spew outwards in an exotic volcanic eruption. This matter tangles with the magnetic field which itself can change its configuration, releasing more energy. And this was where Integral came in.

Only five days after the big eruption, Integral detected highly energetic X-rays coming from the outburst, beyond the energy range that XMM-Newton can see. It is the first time such transient X-ray emission has been detected during the outburst. It disappeared within 10 days and was probably generated as the magnetic configuration changed.

Magnetar outbursts can supply as much energy to Earth as solar flares, despite the fact they are far across our Galaxy, whereas the Sun is at our celestial doorstep. There are two ideas as to how a magnetar forms. One is that it is the tiny core left behind after a highly magnetic star has died. But such magnetic stars are very rare, with just a few known in our Galaxy. Another suggestion is that during the death of a normal star, its tiny core is accelerated, providing a dynamo that strengthens its magnetic field, turning it into a magnetar.

Currently most astronomers favour the first idea but as yet they have no conclusive proof. “If we could just find a magnetar in a cluster of highly magnetic stars, that would prove it,” says Rea.

So far only 15 magnetars in total are known in our Galaxy. SGR 0501+4516 is the first new soft gamma repeater, one of the two types of magnetars, discovered after a decade of searches. So, astronomers continue to search for more, waiting for the next giant eruption. As for their newly discovered SGR 0501+4516, the team has been granted time to return and observe it again next year with XMM-Newton. Now they know where to look, they hope to detect the object in a quiescent state, rather than in outburst, so that they can study the calm after a big storm.