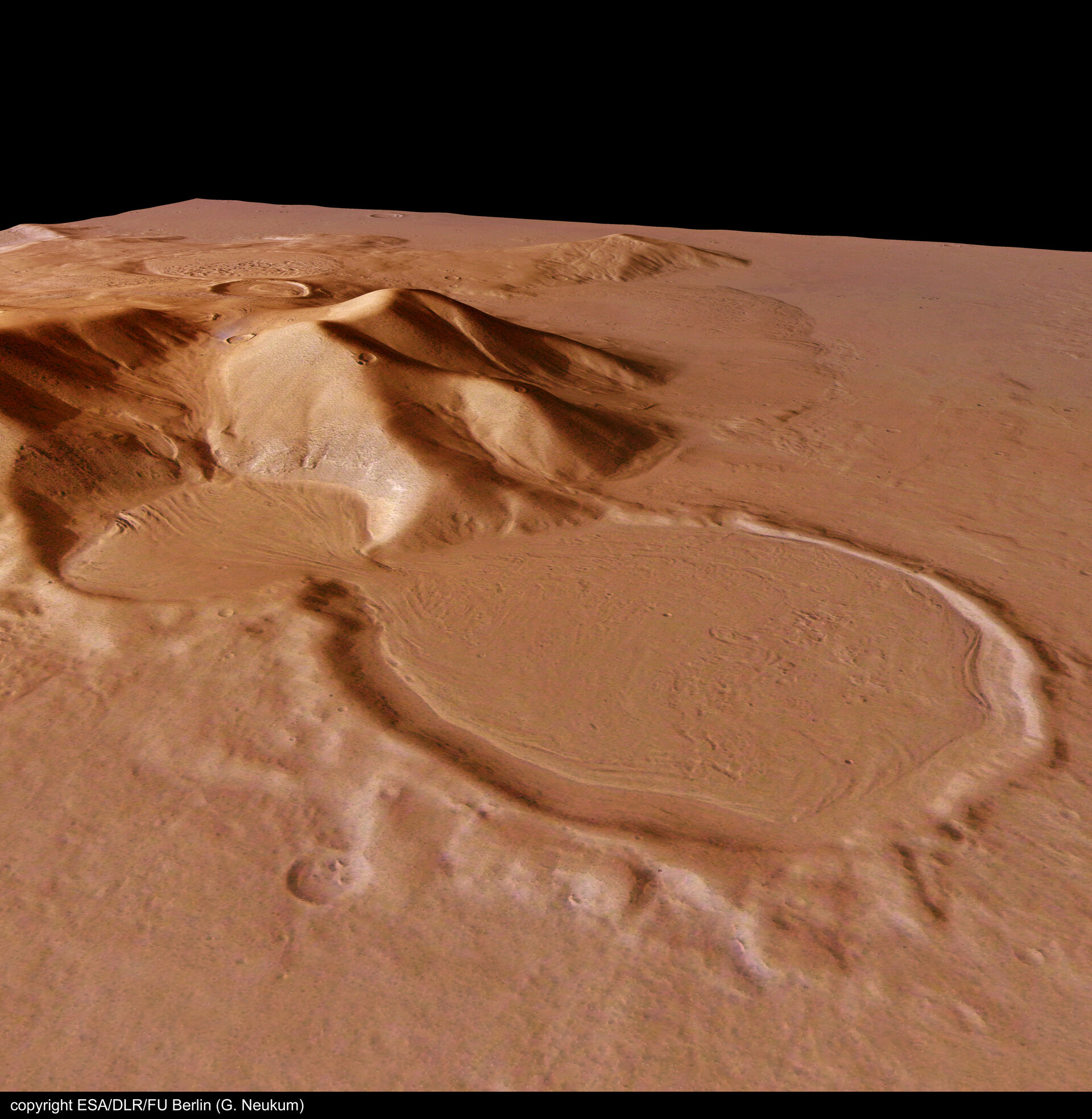 The spectacular features visible today on the surface of the Red Planet indicate the past existence of Martian glaciers, but where did the ice come from?

An international team of scientists have produced sophisticated climate simulations suggesting that geologically recent glaciers at low latitudes (that is near the present-day equator) may have formed through atmospheric precipitation of water-ice particles.

Moreover, the results of the simulations show for the first time that the predicted locations for these glaciers match extensively with many of the glacier remnants observed today at these latitudes on Mars.

For several years, the presence, age and shape of these glacier remnants have raised numerous questions in the scientific community about their formation, and about the conditions on the planet when this happened.

To start narrowing down the rising number of hypotheses, a team led by Francois Forget, University of Paris 6 (France) and interdisciplinary scientist for ESA’s Mars Express mission, decided to ‘turn back the clock’ in their Martian global climate computer model, a tool usually applied to simulate the detail of present-day Mars meteorology.

As a starting point, Forget and colleagues had to make some assumptions - that the north polar cap was still the ice reservoir of the planet, and that the rotation axis was tilted by 45º with respect to the planet’s orbital plane.

“This makes the axis much more oblique than it is today (about 25º), but such an obliquity has probably been very common throughout Mars’s history. Actually, it last occurred only five and a half million years ago,” says Forget.

As expected with such a tilt, the greater solar illumination in the north polar summer increased the sublimation of the polar ice and led to a water cycle much more intense than today.

The simulations showed water ice being accumulated at a rate of 30 to 70 millimetres per year in a few localised areas on the flanks of the Elysium Mons, Olympus Mons and the three Tharsis Montes volcanoes.

After a few thousand years, the accumulated ice would form glaciers up to several hundreds of metres thick.

When the team compared the location and shape of the ‘simulated’ glaciers with the actual glacier-related deposits of Tharsis - one of the three main regions on the planet where signs of glaciers are seen - they found an excellent agreement.

In particular, the maximum deposition is predicted on the western flanks of the Arsia and Pavonis Montes of the Tharsis region, where the largest deposits in this area are actually observed.

In their simulations, the team could even ‘read’ why and how ice was accumulated on the flanks of these mountains in the Tharsis region millions of years ago.

Back then, constant year-long winds similar to monsoons on Earth would favour the upslope movement of water-rich air around Arsia and Pavonis Montes.

While being cooled down by tens of degrees, water would condense and form ice particles (larger than those we observe today in the Tharsis region’s clouds) that settled on the surface.

Other mountains like Olympus Mons show smaller-scale deposits because, according to the simulations, they were exposed to the monsoon-type strong winds and water-rich air only during the northern summer.

“The north polar cap may not have always been the only source of water during the planet’s high obliquity periods,” adds Forget.

“So we ran simulations assuming that ice was available in the south polar cap. We could still see ice accumulation in the Tharsis region, but this time also on the east of the Hellas Basin, a six-kilometre deep crater.”

This would explain the origins of another major area where ice-related landforms are observed today, the eastern Hellas Basin. indeed.

“The Hellas basin is in fact so deep as to induce the generation of a northward wind flow on its eastern side that would carry most of the water vapour sublimating from the south polar cap during summer. When the water-rich air meet colder air mass over eastern Hellas, water condense, precipitate, and form glaciers,” said Forget.

However, the team could not predict ice deposition in the Deuterolinus-Protonilus Mensae region, where glaciers could have been formed by other mechanisms. The scientists are considering several other hypotheses on the formation of recent glaciers.

For instance, observations of Olympus Mons by the High Resolution Stereo Camera on board Mars Express suggest that movement of water from the subsurface to the surface due to hydrothermal activity may have led to the development of glaciers on the cold surface.

The Martian global climate computer model is a tool designed by the Laboratoire de Météorologie Dynamique, France, with the support of CNRS, ESA and CNES. It is used to simulate the present-day climate on Mars and so support the analysis of many of the current observations at Mars, including those of ESA’s Mars Express.

The version used here provides the distribution of atmospheric vapour and clouds; it describes the exchange between surface ice and atmospheric water, transport and turbulent mixing of water in the atmosphere, and the microphysics of cloud formation.