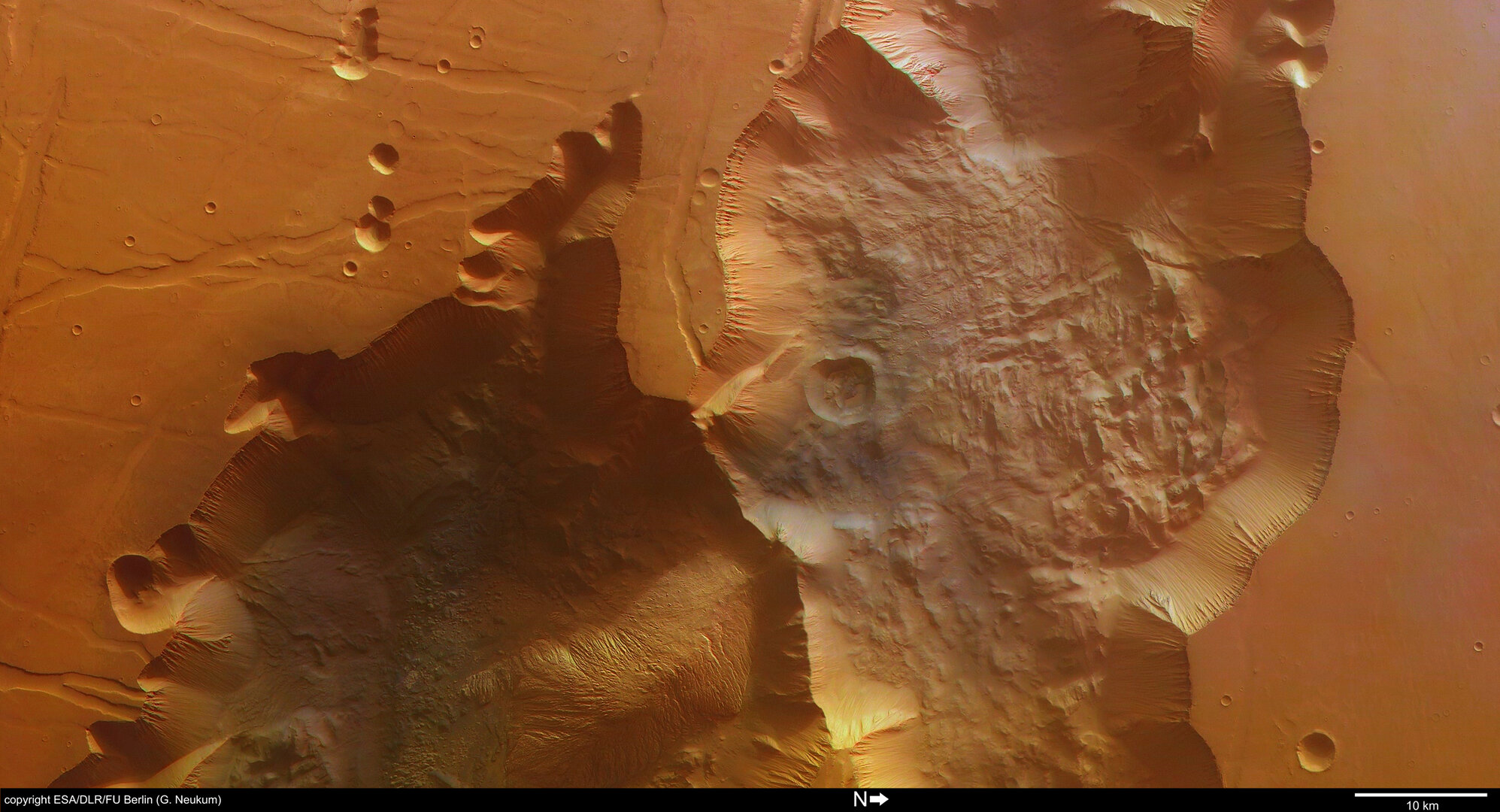 These images, taken by the High Resolution Stereo Camera (HRSC) on board ESA’s Mars Express spacecraft, show part of Tithonium Chasma, a major trough at the western end of the Valles Marineris canyon on Mars.

The images were taken during orbit 887 with a ground resolution of approximately 13 metres per pixel.

The displayed region is located at the beginning of the canyon system at about latitude 5° South and longitude 280° East. North is to the right of the image.

It ranges from approximately 10 to 110 kilometres wide, narrows in an easterly (top to bottom) direction and has a maximum depth of about 3.5 to 4 kilometres.

The colour image covers the eastern part of Tithonium Chasma. Along the slopes of the trough (centre), linear features due to erosion are visible. At the base of the northern wall (on the right of the black and white image), an apron of material has a longitudinal ridge pattern and may have been caused by a large landslide (see close-up, right).

Dune fields are scattered throughout the trough, including the north-east portion of a crater. A string of depressions on the plains in the south-west of the image may be caused by surface collapse. These features are common to this region and extend parallel to Valles Marineris.

Nearby, prominent linear features are visible and may be faults associated with the formation of the Tharsis Rise, located to the west of Valles Marineris and extending to a height of 8 to 10 kilometres. Some of these faults can be seen faintly extending into the trough.

In the eastern part of the trough, an interesting hill exhibits linear features. These structures are highlighted in the following close-up and perspective views and could have been caused by fluvial or 'aeolian' (wind-related) erosion. The darker material to the south of this hill is thought to be underlying material that has been exposed by wind erosion.

By cutting deep into the Martian surface, this area of Valles Marineris provides a window into geological and climatic history of the planet. Valles Marineris has had a complex evolution and has been shaped by tectonic, volcanic and glacial processes, as well as possibly fluvial or aeolian erosion.

Data from the HRSC, coupled with information from the other instruments on ESA’s Mars Express and other missions, will provide new insights into the geological evolution of the Red Planet and also pave the way for future missions.