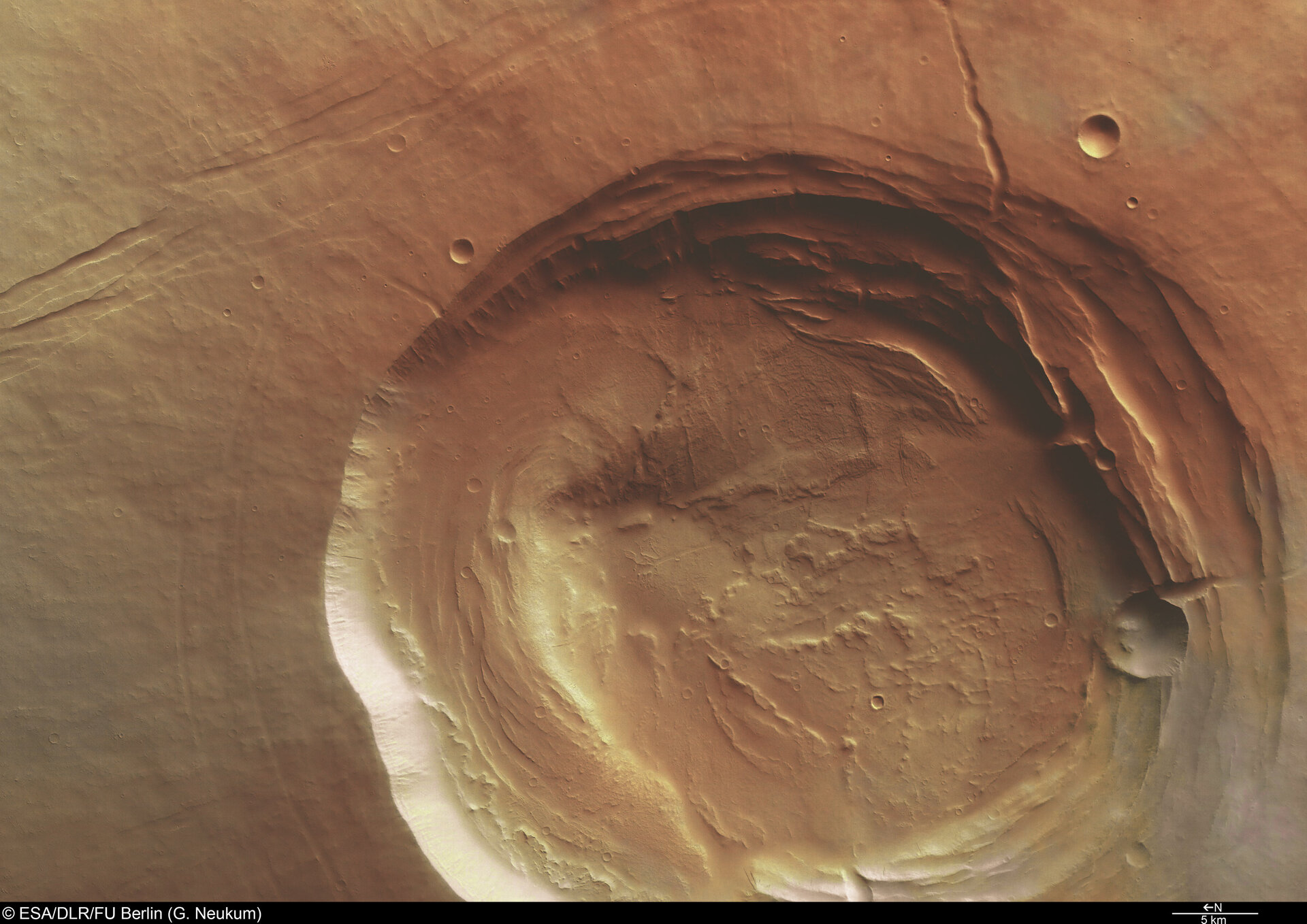 These images, taken by the High Resolution Stereo Camera (HRSC) on board ESA’s Mars Express spacecraft, show the Biblis Patera volcano, located in the western part of the Tharsis rise on Mars.

The HRSC obtained these images during orbit 1034 with a ground resolution of approximately 10.8 metres per pixel. The scenes show the region of Biblis Patera, at approximately 2.0° North and 236.0° East.

The bowl-shaped depression (the ‘caldera’) may have been formed as the result of collapse of the magma chamber during eruptions of the volcano. The caldera has a diameter of 53 kilometres and extends to a maximum depth of roughly 4.5 kilometres.

The morphology of the caldera suggests that multiple collapse events have occurred.The radial depressions and faint concentric circles on the flanks of the volcano are most likely faults associated with the formation of Biblis Patera.

In the south-west (top left), the linear features extending north-west to south-east appear to be faults. Surrounding Biblis Patera there are more faults with a similar orientation and which may be related to the formation of the Tharsis Rise.

Biblis Patera is older than the surrounding plains, which consist of lava flows originating from Pavonis Mons (the middle one of the Tharsis Montes volcanoes). In the main colour image, clouds obscure the surface to the north-east of the caldera (bottom right), making it appear grey and less reddish-orange in colour.

The stereo and colour capability and the high-resolution coverage of extended areas with the HRSC allow the improved study of the complex geological evolution of the Red Planet.

By supplying new image data for volcanoes like Biblis Patera, the HRSC provides scientists with the opportunity to better understand the morphology and volcanic history of Mars.

Data from the HRSC, coupled with information from other instruments on Mars Express and other missions, improves our understanding of this fascinating planet.

The colour images were processed using the HRSC nadir (vertical view) and three colour channels. The perspective view was calculated from the digital terrain model derived from the stereo channels.