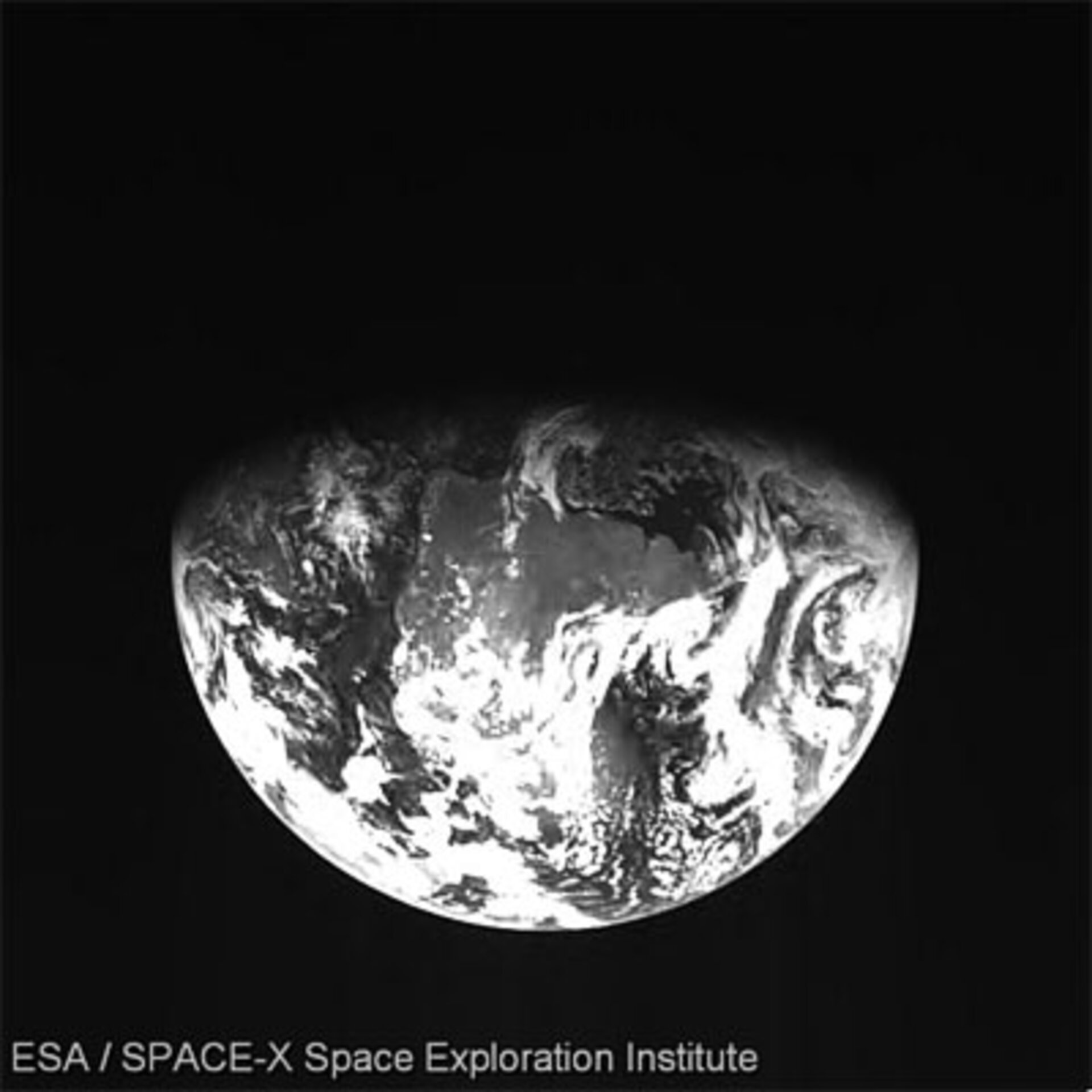 At a press event held today at ESA's Spacecraft Operations Centre (ESOC), SMART-1 engineers, operations experts and scientists are presenting data and preliminary results obtained by the spacecraft prior to its impact on the Moon at 07:42 CEST, 3 September 2006.

Perhaps the most sentimental image sequence was taken by AMIE just four days before impact, on 29 August at 21:00 CEST (19:00 UT), when the camera was pointed back towards the Earth to capture, in the best tradition of many previous lunar missions, a view of our home planet. The sequence of images is centred over Brazil at approximately 44.9º West and 19.2º South (North is to the left). The Kourou area in French Guiana, from where SMART-1 was launched in 2003, is also visible.

Remarkably, this movie sequence shows the Moon passing in front of the Earth, beautifully underlining the close gravitational relationship between the Earth and its natural satellite.

During SMART-1's final orbits on 1 and 2 September, the spacecraft was passing at extremely low altitude over the Moon's surface, which was in darkness, prompting scientists to take advantage of this unique observational situation by pointing the AMIE camera laterally toward the Moon's limb (horizon). The camera gathered images of the thin dust envelope surrounding the Moon, which will be analysed by scientists in the future.

As a result, the best final images from AMIE were taken on 2 September; seven of these were posted on the ESA Portal on 3 September and, together with additional images from the set, these have been combined into a pair of movie sequences (click on images at right).

The images were taken between 16:55 and 17:34 CEST (14:55-15:34 UT). The sequences show the surface of the Moon passing under SMART-1 during the final orbits and show what a passenger on board the spacecraft would have seen shortly before impact and destruction.

Other SMART-1 results presented today include a mosaic of AMIE nadir (vertical pointing) images showing a 400-km-long area inside the Moon South Pole-Aitken Basin (SPA), the largest and oldest known impact crater basin in the solar system and the deepest depression in the Moon.

AMIE was able to image the area under ideal illumination conditions, which will afford scientists an opportunity to compare AMIE images with existing data of the same area gathered by previous lunar missions.

We now have an image library that will keep scientists and researchers busy for the next months and years.

"These images can help us understand the surface morphology, formation and evolution of the South Pole-Aitken Basin. This type of nadir observation provides the geological context of the area, and will help further extend our knowledge of the Moon's geology," said Jean-Luc Josset, AMIE Principal Investigator, SPACE-X (Space Exploration Institute), Neuchatel, Switzerland.

In fact, scientists intend to compare the AMIE visible images of the South Pole-Aitken Basin morphology to those previously captured by the camera using the 'push-broom', three-colour filter mode. The push-broom images give information on the Moon's surface composition and mineralogy, and a comparison between the two sets is expected to increase understanding of the Moon's overall surface composition.

Another AMIE mosaic presented today shows the Moon's North polar area and was taken during first phase of the SMART-1 mission in 2005.

Originally designed to capture just four images per orbit, AMIE exceeded all expectations and actually averaged 100 images per rotation, generating a final library of some 20 000 images.

Following the early decision to redesign the science orbit and lower the apolune (point of highest approach) from 10 000 to 3000 km over the lunar North pole, AMIE was able to adjust to the large number of imaging commands and complex operations that were introduced.

"This decision allowed AMIE not only to take sharp images of the South Pole as planned, but also to study the northern hemisphere from a much shorter range than initially foreseen," said Josset. "We now have an image library that will keep scientists and researchers busy for the next months and years," he added.

The volume of data generated during the mission is expected to keep scientists busy for some time. Among the remarkable results already determined was the first-ever remote detection of all the main elements which make up lunar minerals. This includes, for the first time, calcium.

"SMART-1 data have opened a new era in remote sensing investigation of Earth's nearest neighbour. A great deal is still to be learned from analysis of these data, while we already look forward to flying instruments similar to D-CIXS on the upcoming Chandrayan lunar probe (India)," said Manuel Grande, D-CIXS Principal Investigator, University of Wales, Aberystwyth, UK.

Furthermore, scientists worldwide are analysing data gathered from the ground observation campaign including the impact flash to eventually obtain fresh information on impact physics, lunar surface science and spacecraft behaviour during impact, all expected to be useful for future lunar missions.

He added: "It will survive by continuing to contribute to our collective knowledge of Earth's nearest neighbour for many years, and it is only fitting that SMART-1 has found its final resting place on the Moon."

The presentations and an audio recording from today's press event can be downloaded as PDF files from the links at right.