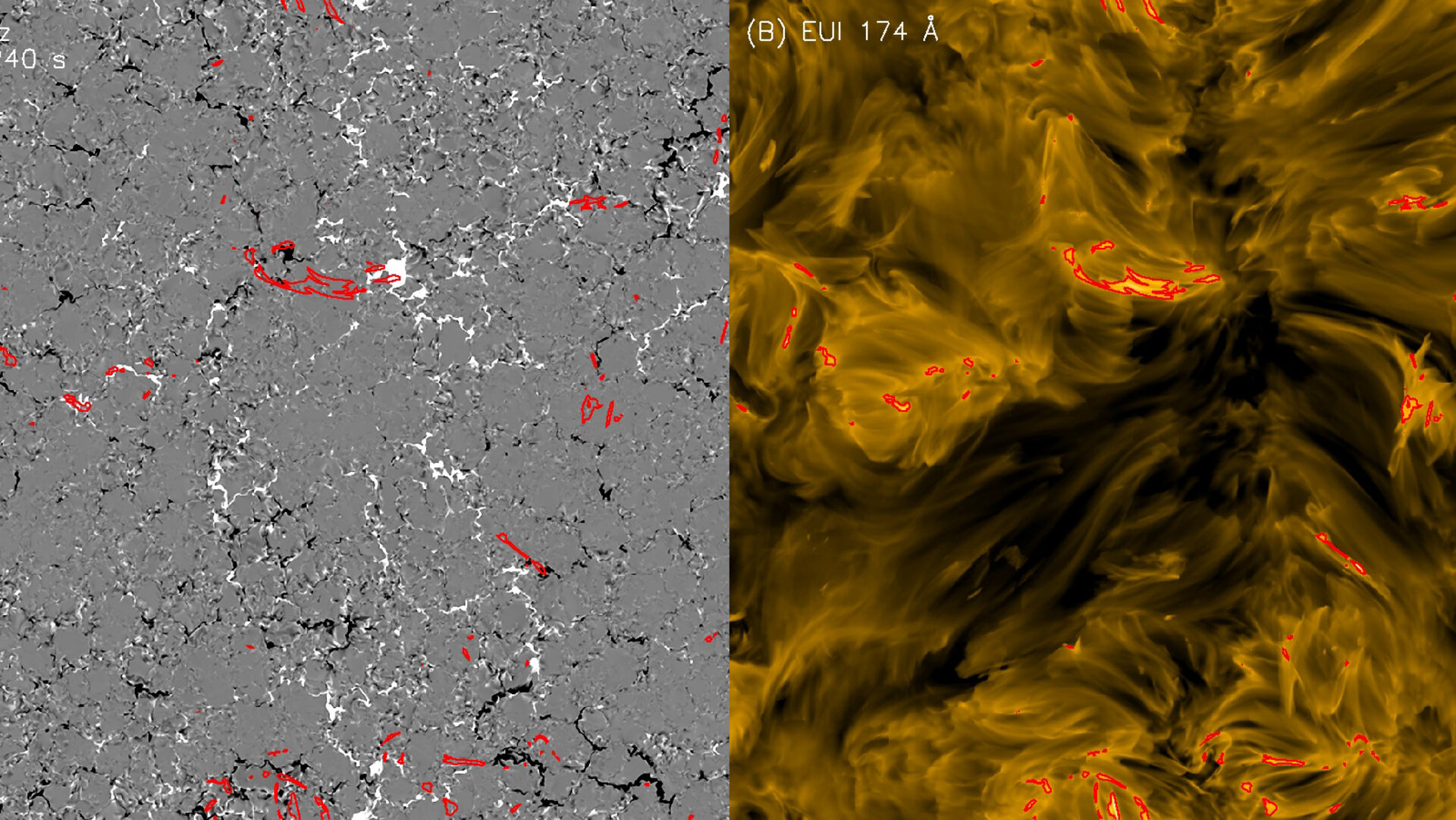 Computer simulations show that the miniature solar flares nicknamed ‘campfires’, discovered last year by ESA’s Solar Orbiter, are likely driven by a process that may contribute significantly to the heating of the Sun’s outer atmosphere, or corona. If confirmed by further observations this adds a key piece to the puzzle of what heats the solar corona – one of the biggest mysteries in solar physics.

Campfires are one of many subjects being discussed in a dedicated Solar Orbiter first results session at the European Geosciences Union (EGU) General Assembly today.

The Sun has a mysterious feature: somehow the tenuous outer atmosphere contains gas with a temperature of a million degrees, yet the solar surface is just 5500°C. Logic would suggest that if you have a body that is very hot at the centre and relatively cool on the surface, it should be even cooler the further you go away. But the peculiar thing about the corona of the Sun – and many other stars as well – is that it starts to heat up the further you move above the surface. Many ideas have been put forward over the last decades homing in on the Sun’s magnetic field, but how the energy is generated, transported and dissipated has been a source of much debate.

Enter Solar Orbiter, with one of its key goals to probe deeper into this mystery. 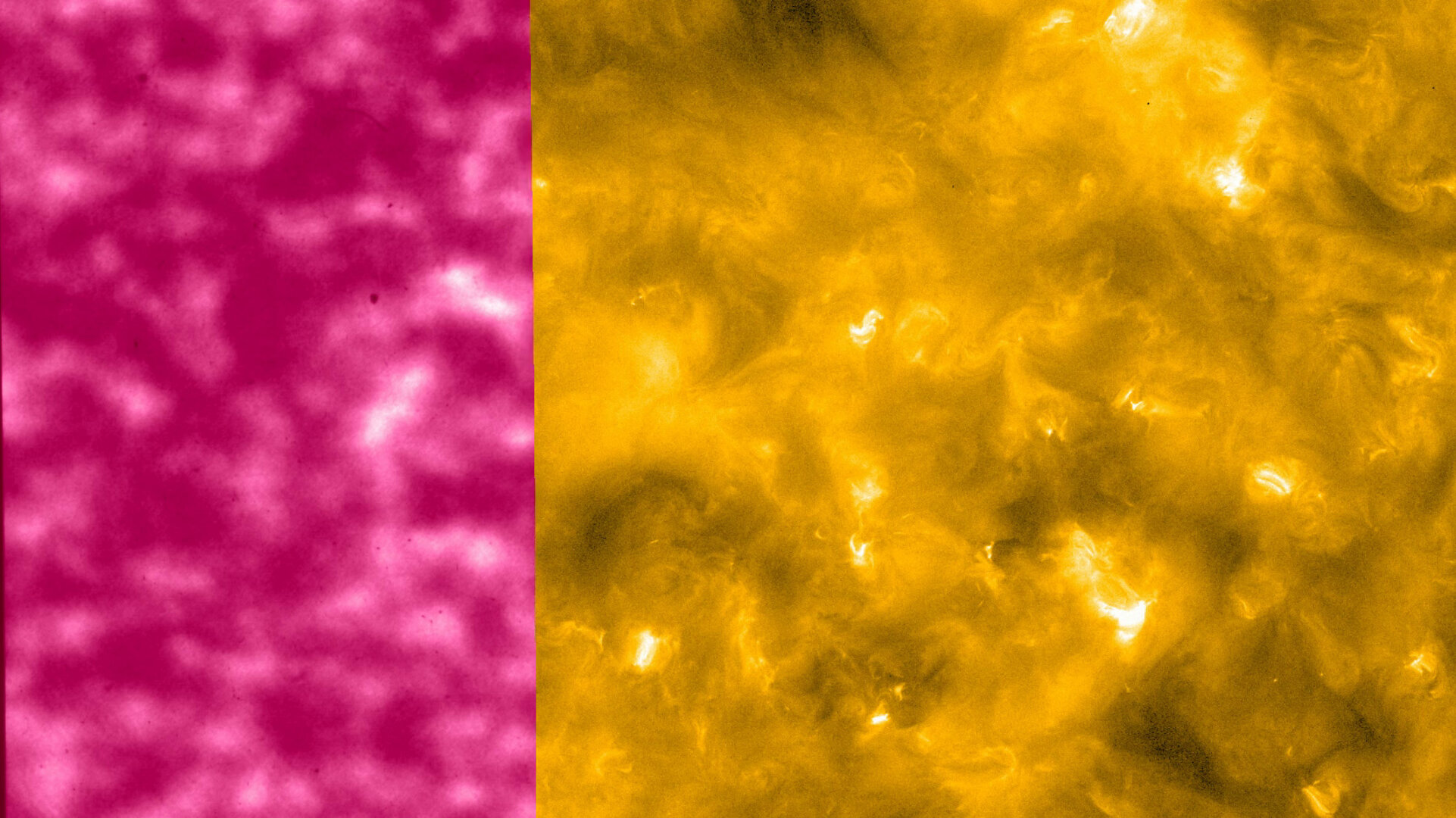 Stunning detail already provided by Solar Orbiter’s Extreme Ultraviolet Imager (EUI) ‘first light’ images  just months after launch last year and since then has revealed more than 1500 small, flickering brightenings nicknamed campfires. These short-lived campfires last for between 10 and 200 seconds, and have a footprint covering between 400 and 4000 km. The smallest and weakest events, which had not been observed before, seem to be the most abundant, and represent a previously unseen fine structure of the region where the heating mystery is suspected to be rooted.

Yajie Chen, a PhD student from Peking University in China, working with Professor Hardi Peter from the Max Planck Institute for Solar System Research in Germany and colleagues, used a computer model to dive into the physics of the campfires, with exciting first results.

“Our model calculates the emission, or energy, from the Sun as you would expect a real instrument to measure,” explains Hardi. “The model generated brightenings just like the campfires. Furthermore, it traces out the magnetic field lines, allowing us to see the changes of the magnetic field in and around the brightening events over time, telling us that a process called component reconnection seems to be at work.”

“Our model shows that the energy released from the brightenings through component reconnection could be enough to maintain the temperature of the solar corona predicted from observations,” says Yajie. 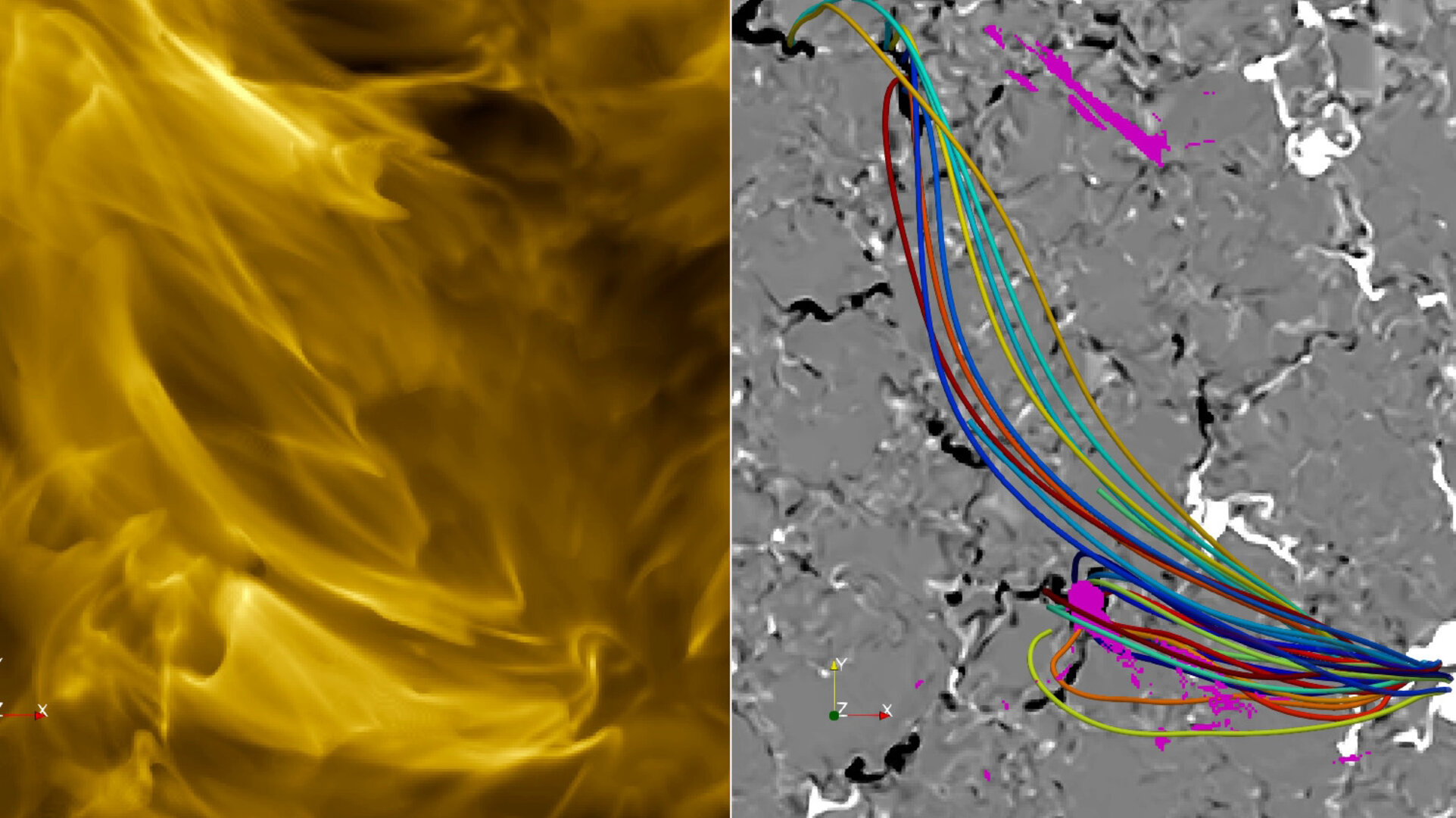 “In one of our case studies, we find that the untwisting of a flux rope [helical magnetic field lines winding around a common axis] initiates the heating instead,” adds Hardi. “It’s exciting to find these variations, and we’re looking forward to see what further insights our models bring to help us improve our theories on the processes behind the heating.”

The team cautions that it’s very early days. They have used the model to look at seven of the brightest events generated in their simulation, which likely correspond to the largest campfires observed by EUI. Key to advancing the study will be joint observations between EUI and the spacecraft’s Polarimetric and Helioseismic Imager (PHI) and Spectral Imaging of the Coronal Environment (SPICE) spectrograph once Solar Orbiter’s full science mission gets going in November. PHI will reveal the magnetic field of the Sun and how it changes on the surface, while SPICE will measure the temperature and density of the corona.

Further insight into the campfires has also been enabled by pairing up with NASA’s Solar Dynamics Observatory, which is in orbit around the Earth, to triangulate the height of the campfires in the solar atmosphere.

“To our surprise, campfires are located very low in the solar atmosphere, only a few thousand kilometres above the solar surface, the photosphere,” says David Berghmans, Principal Investigator of EUI. “It is very early days, and we are still learning a lot about the campfire characteristics. For example, even though campfires look like small coronal loops, their length is on average a bit short for their height, suggesting we only see part of these little loops. But our preliminary analysis also shows that campfires do not really change their height during their lifetime, setting them aside from jet-like features.”

Understanding the characteristics of the campfires and their place amongst other known solar phenomena will enable scientists to dive deeper into the solar corona heating problem.

“How fantastic to already have such promising data that may provide insight into one of solar physics’ greatest mysteries before Solar Orbiter has even begun its nominal science phase,” says ESA’s Solar Orbiter Project Scientist Daniel Müller. “Our mission is lucky to be building on the incredible ground-work of those that have flown before, and the theories and models already put forward over the last decades. We’re looking forward to see what missing details Solar Orbiter – and the solar community working with our data – will contribute to solving open questions in this exciting field.”

Solar Orbiter is currently in ‘cruise phase’, focused primarily on instrument calibration, and will begin coordinated observations between its suite of ten remote sensing and in situ instruments from November this year.

The results were discussed at EGU today and are linked to the following publications:

“Transient small-scale brightenings in the quiet solar corona: a model for campfires observed with Solar Orbiter” by Y. Chen et al, accepted for publication in Astronomy and Astrophysics.

The computer simulations described in this story were conducted at the Max Planck Computing and Data Facility (MPCDF) in Garching, Germany.

Media resources for the EGU General Assembly 2021 are available at https://www.egu.eu/gamedia/2021/