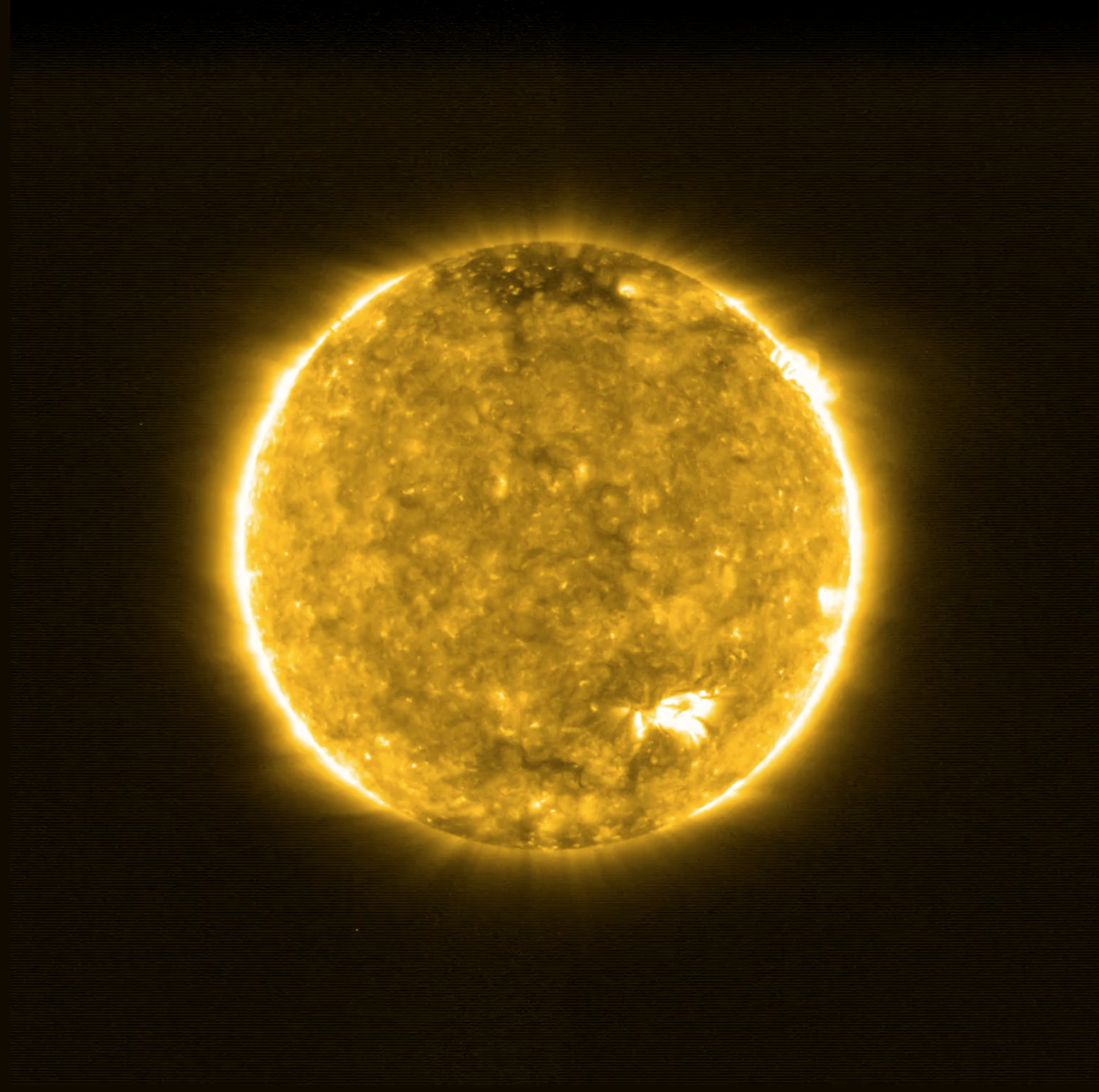 The first images from Solar Orbiter, a new Sun-observing mission by ESA and NASA, have revealed omnipresent miniature solar flares, dubbed ‘campfires’, near the surface of our closest star.

According to the scientists behind the mission, seeing phenomena that were not observable in detail before hints at the enormous potential of Solar Orbiter, which has only just finished its early phase of technical verification known as commissioning.

“These are only the first images and we can already see interesting new phenomena,” says Daniel Müller, ESA’s Solar Orbiter Project Scientist. “We didn’t really expect such great results right from the start. We can also see how our ten scientific instruments complement each other, providing a holistic picture of the Sun and the surrounding environment.”

Solar Orbiter, launched on 10 February 2020, carries six remote-sensing instruments, or telescopes, that image the Sun and its surroundings, and four in situ instruments that monitor the environment around the spacecraft. By comparing the data from both sets of instruments, scientists will get insights into the generation of the solar wind, the stream of charged particles from the Sun that influences the entire Solar System.

The unique aspect of the Solar Orbiter mission is that no other spacecraft has been able to take images of the Sun’s surface from a closer distance.

The campfires shown in the first image set were captured by the Extreme Ultraviolet Imager (EUI) from Solar Orbiter’s first perihelion, the point in its elliptical orbit closest to the Sun. At that time, the spacecraft was only 77 million km away from the Sun, about half the distance between Earth and the star.

“The campfires are little relatives of the solar flares that we can observe from Earth, million or billion times smaller,” says David Berghmans of the Royal Observatory of Belgium (ROB), Principal Investigator of the EUI instrument, which takes high-resolution images of the lower layers of the Sun’s atmosphere, known as the solar corona. “The Sun might look quiet at the first glance, but when we look in detail, we can see those miniature flares everywhere we look.”

The scientists do not know yet whether the campfires are just tiny versions of big flares, or whether they are driven by different mechanisms. There are, however, already theories that these miniature flares could be contributing to one of the most mysterious phenomena on the Sun, the coronal heating.

“These campfires are totally insignificant each by themselves, but summing up their effect all over the Sun, they might be the dominant contribution to the heating of the solar corona,” says Frédéric Auchère, of the Institut d'Astrophysique Spatiale (IAS), France, Co-Principal Investigator of EUI.

The solar corona is the outermost layer of the Sun’s atmosphere that extends millions of kilometres into outer space. Its temperature is more than a million degrees Celsius, which is orders of magnitude hotter than the surface of the Sun, a ‘cool’ 5500 °C. After many decades of studies, the physical mechanisms that heat the corona are still not fully understood, but identifying them is considered the ‘holy grail’ of solar physics.

“It’s obviously way too early to tell but we hope that by connecting these observations with measurements from our other instruments that ‘feel’ the solar wind as it passes the spacecraft, we will eventually be able to answer some of these mysteries,” says Yannis Zouganelis, Solar Orbiter Deputy Project Scientist at ESA.

Seeing the far side of the Sun 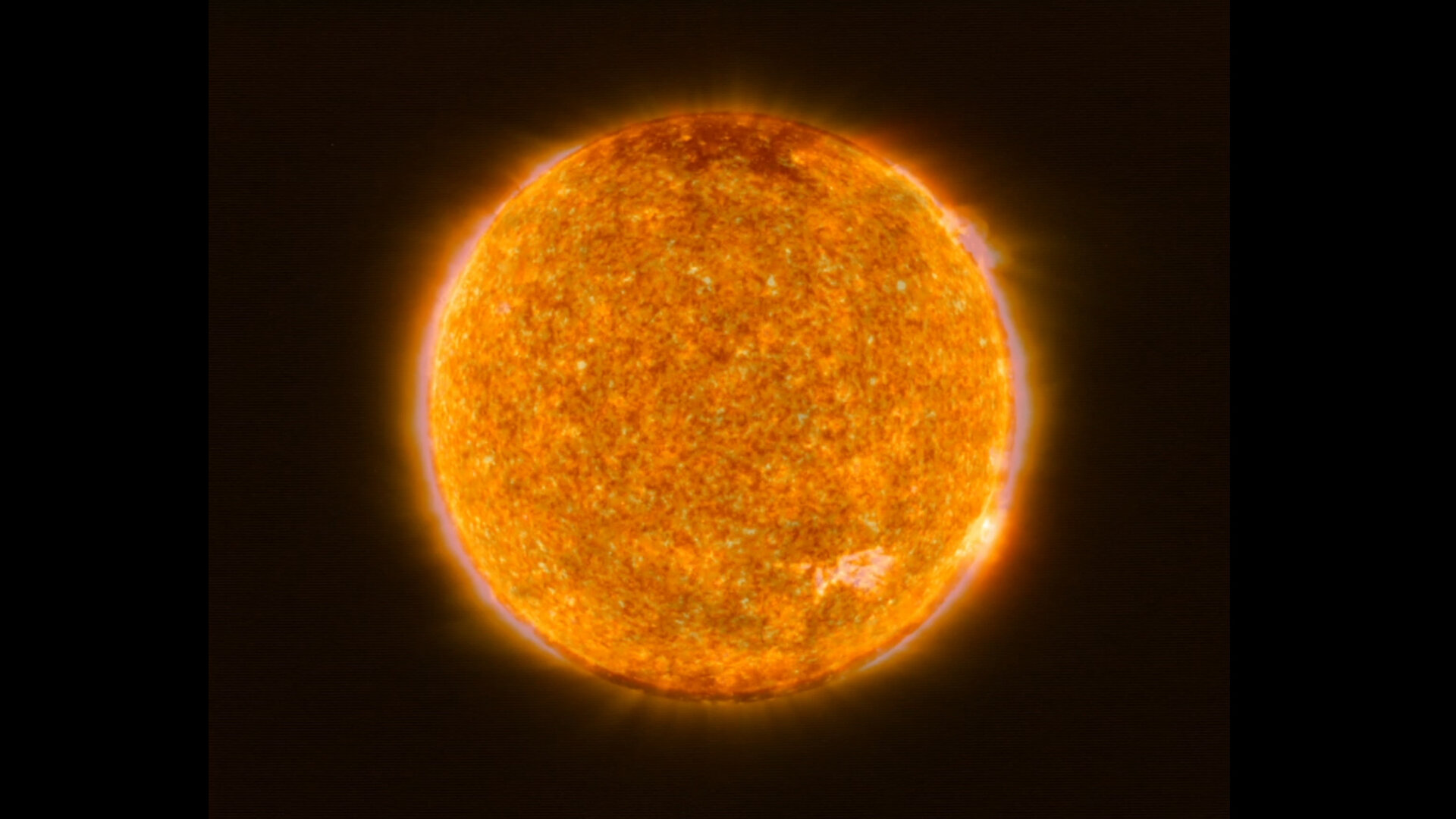 Complementary views of the Sun and its outer atmosphere, or corona, based on the EUI, PHI, Metis and SoloHI instruments on Solar Orbiter.
Access the video

The Polarimetric and Helioseismic Imager (PHI) is another cutting-edge instrument aboard Solar Orbiter. It makes high-resolution measurements of the magnetic field lines on the surface of the Sun. It is designed to monitor active regions on the Sun, areas with especially strong magnetic fields, which can give birth to solar flares.

During solar flares, the Sun releases bursts of energetic particles that enhance the solar wind that constantly emanates from the star into the surrounding space. When these particles interact with Earth’s magnetosphere, they can cause magnetic storms that can disrupt telecommunication networks and power grids on the ground.

“Right now, we are in the part of the 11-year solar cycle when the Sun is very quiet,” says Sami Solanki, the director of the Max Planck Institute for Solar System Research in Göttingen, Germany, and PHI Principal Investigator. “But because Solar Orbiter is at a different angle to the Sun than Earth, we could actually see one active region that wasn’t observable from Earth. That is a first. We have never been able to measure the magnetic field at the back of the Sun.”

The magnetograms, showing how the strength of the solar magnetic field varies across the Sun’s surface, could be then compared with the measurements from the in situ instruments.

“The PHI instrument is measuring the magnetic field on the surface, we see structures in the Sun’s corona with EUI, but we also try to infer the magnetic field lines going out into the interplanetary medium, where Solar Orbiter is,” says Jose Carlos del Toro Iniesta, PHI Co-Principal Investigator, of Instituto de Astrofísica de Andalucía, Spain.

The four in situ instruments on Solar Orbiter then characterise the magnetic field lines and solar wind as it passes the spacecraft.

Christopher Owen, of University College London Mullard Space Science Laboratory and Principal Investigator of the in situ Solar Wind Analyser, adds, “Using this information, we can estimate where on the Sun that particular part of the solar wind was emitted, and then use the full instrument set of the mission to reveal and understand the physical processes operating in the different regions on the Sun which lead to solar wind formation.”

“We are all really excited about these first images – but this is just the beginning,” adds Daniel. “Solar Orbiter has started a grand tour of the inner Solar System, and will get much closer to the Sun within less than two years. Ultimately, it will get as close as 42 million km, which is almost a quarter of the distance from Sun to Earth.”

“The first data are already demonstrating the power behind a successful collaboration between space agencies and the usefulness of a diverse set of images in unravelling some of the Sun’s mysteries,” comments Holly Gilbert, Director of the Heliophysics Science Division at NASA Goddard Space Flight Center and Solar Orbiter Project Scientist at NASA.

Solar Orbiter is a space mission of international collaboration between ESA and NASA. Nineteen ESA Member States (Austria, Belgium, the Czech Republic, Denmark, Finland, France, Germany, Greece, Italy, Ireland, Luxembourg, the Netherlands, Norway, Poland, Portugal Spain, Sweden, Switzerland, and the United Kingdom), as well as NASA, contributed to the science payload and/or the spacecraft. The satellite was built by prime contractor Airbus Defence and Space in the UK.