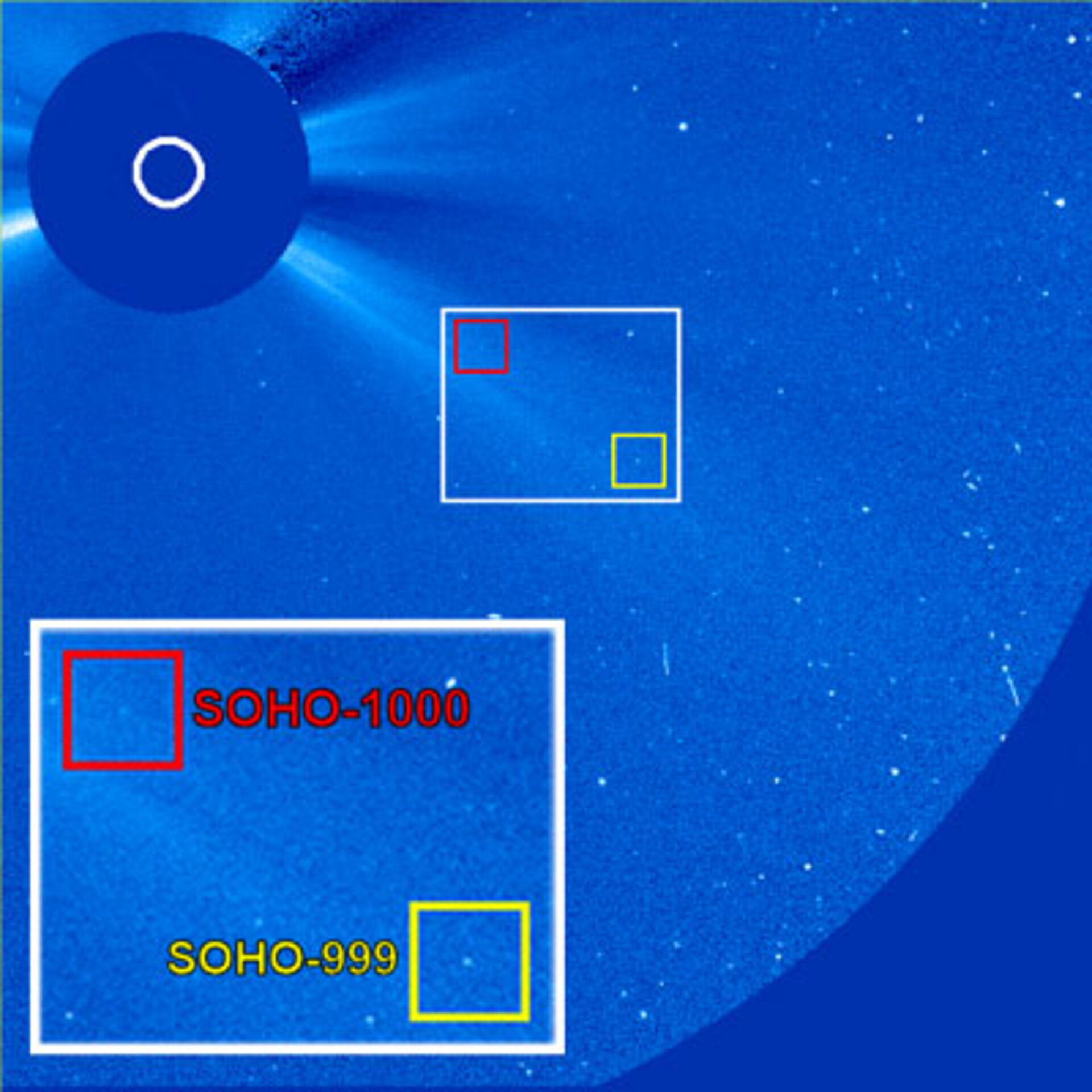 Single-handedly, SOHO has almost doubled the count of known comets – that is to say, those which astronomers have ever properly tracked and recorded.

This by-product of the spacecraft’s solar investigations comes about because many small comets deploy visible tails only when they are too close to the Sun to be seen by ground-based telescopes.

With its special instruments, and especially the Large Angle and Spectrometric Coronagraph (LASCO), SOHO has a grandstand view of the space around the Sun where ‘sungrazing’ comets appear every few days.

Previous solar spacecraft, Solwind and SolarMax, had each discovered ten sungrazing comets in the 1980s, so the first SOHO comet in 1996 came as no great surprise. But experts were soon amazed at the rate of further discoveries.

Many of the comets follow similar tracks in space because they are fragments of a gigantic comet perhaps 100 kilometres wide that passed very close to the Sun and gradually broke up into large and small pieces.

Most of the comet discoveries now come from amateur astronomers, who for many years have had daily access to the latest SOHO images, released worldwide via the internet. The hunters look out for small specks of light that move on a comet-like track from one image to the next.

Apart from those first spotted in Europe and the USA, many finds have come from amateurs in countries such as Australia, China, Japan, Russia and the Ukraine.

But it is time-consuming work. Toni Scarmato, a high-school teacher in Calabria, Italy, had the distinction of discovering Comet SOHO-1000 in August 2005. He said, "I want to dedicate SOHO’s 1000th comet to my wife Rosy and my son Kevin to compensate for the time that I have taken from them to search for SOHO comets."

Apart from LASCO’s discoveries, the SWAN instrument on SOHO spots comets by the clouds of hydrogen that surround them when they approach the Sun. It has tracked comets already known to ground observers, and when the famous Comet Hale-Bopp passed by in 1997, SWAN saw the hydrogen cloud grow to a diameter of 100 million kilometres. The team also discovered some unknown comets, with seven of SOHO’s total haul being credited to SWAN, at the last count.