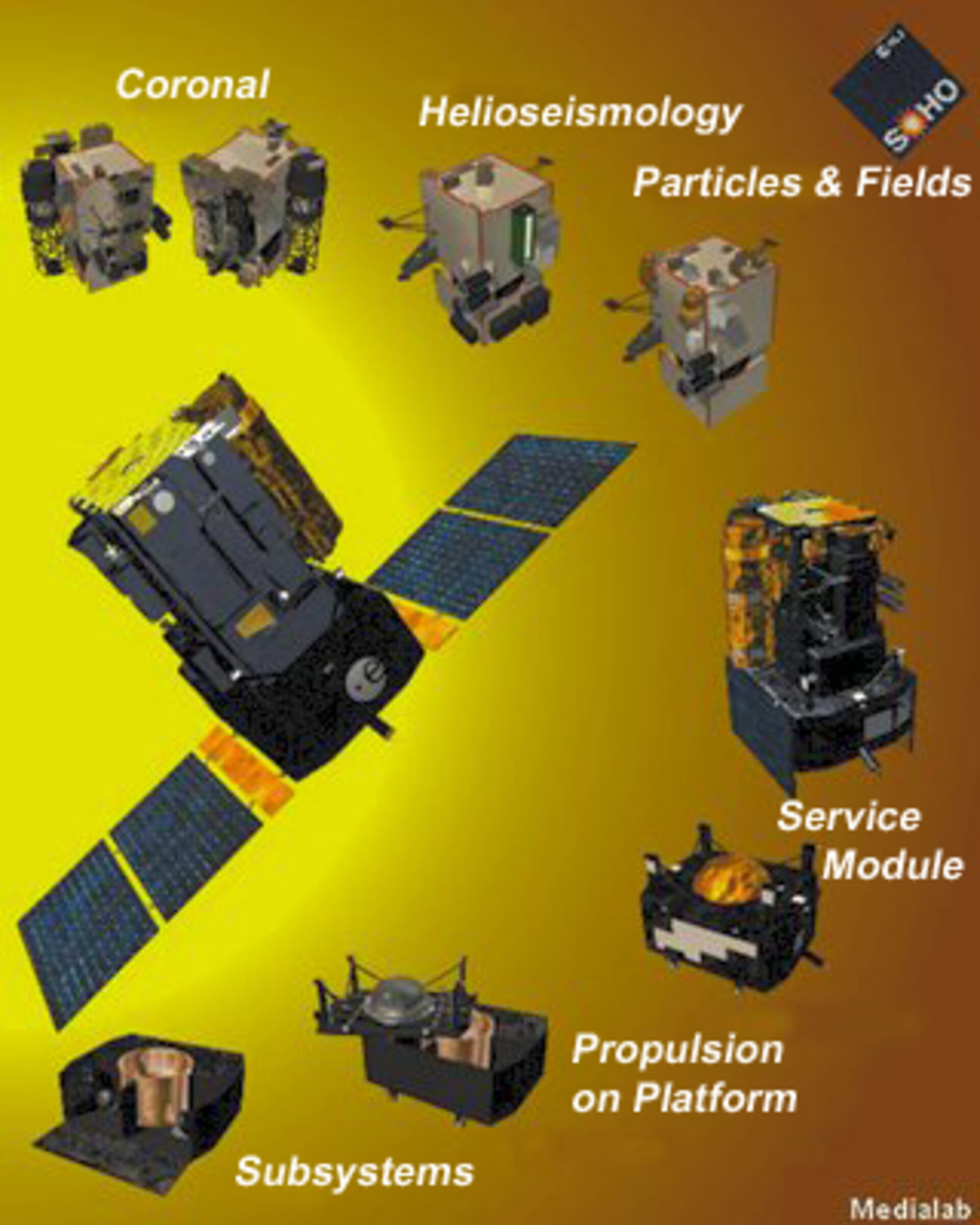 Using a combination of instruments on board the ESA/NASA SOHO spacecraft and the latest astronomical techniques, astronomers can look around the Sun and see through it to measure solar activity on the far side.

The ESA/NASA SOHO spacecraft has an instrument on board called the Michelson Doppler Imager, or MDI.

Using a technique called 'helioseismology', MDI can produce images and detect active regions, or sunspots, on the Sun's far side in a similar way that seismologists learn about the Earth's interior by monitoring waves caused by earthquakes.

Using sound to 'look' through the Sun

In the 1960s it was discovered that sound waves travelled inside the Sun and later realised that these could be used to make direct measurements of the star’s internal structure and dynamics.

Since the Sun is a ball of hot gas, its interior transmits sound very well. Sound waves that travel through the Sun can be used to build up a picture of the invisible internal structure and dynamics of the star.

Doing an ultrasound scan of the Sun!

These sound waves are detected by measuring by the ‘Doppler shift‘ of light emitted at the Sun's surface. Movement of the gas near the surface causes vigorous turbulence that produces a broad spectrum of random noises.

This technique can detect sunspots that appear on the otherwise homogeneous surface, even on the far side of the Sun, because of the changes in the wave patterns seen on the visible side. Although MDI can only observe the central part of the Sun's disc at any given time – not the edges - it can produce whole-Sun maps of magnetic activity, every 12 hours.

While the physics is slightly different, helioseismology uses sound waves to probe the interior of the Sun in a way similar to a sonogram, or ultrasound scan, is used to image babies inside expectant mothers.

Another technique was applied to the duo of giant sunspots 10486 and 10488, the same active regions that caused so much intense solar activity a few weeks ago.

This technique, the new ‘Lyman-alpha’ method, uses SOHO’s SWAN instrument (Solar Wind Anisotropies) and indirectly monitors the far side of the Sun by mapping the sky around it in ultraviolet light.

The Sun and most of the Solar System are bathed in a huge cloud of interstellar hydrogen. This gas lights up with ‘Lyman-alpha’ emission (a particular frequency of light emitted by hydrogen atoms) when it is hit by ultraviolet radiation from the Sun.

Seen from SOHO, the region of the sky around the Sun is in fact illuminated by the far side of the Sun. Since active regions on the Sun are brighter in Lyman-alpha light, the sky is brighter in the region facing them, like a lighthouse beam rotating in fog. Any change in the solar activity can be seen from the amount of Lyman-alpha emission observed by SWAN.

Due to the Sun’s 27-day rotation period, the two sunspots 10486 and 10488 disappeared from view on 4 November, and reappeared on the east limb around 18 November. But because SWAN can track solar activity at the limbs, it saw sunspots 10486 and 488 actually increase in strength as they rounded to the far side.

Since then, the activity of the two sunspots significantly decreased, reducing also the probability of a new episode of solar storms. However, latest measurements of 18 and 19 November show a new increase of their activity.

Seismic imaging with MDI proved very useful in following the development of these huge active regions in late October and early November, and allowed us to accurately predict of their reappearance. SWAN allowed us to estimate more quantitatively the solar activity.

Together with the other instruments on board SOHO, SWAN and MDI provide formidable tools for us to produce more accurate forecasts of the space weather which can create problems for many space activities and even operations on Earth.