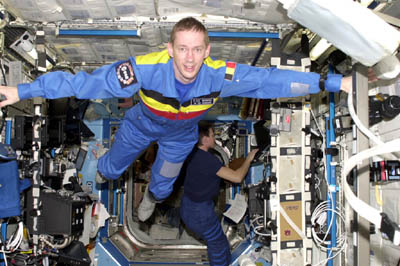 Frank graduated from the Royal School of Cadets in 1979. He received a master’s degree in telecommunications and civil engineering from the Royal Military Academy in Brussels in 1984. He then became a senior test pilot in the Belgian Air Force, responsible for all test programmes. Frank has logged more than 2300 hours flying time on several types of high-performance aircraft, including Mirage, F16, Jaguar and Tornado.

In January 2000, Frank joined the European Astronaut Corps of the European Space Agency. His first spaceflight was a trip as a flight engineer to the International Space Station in 2002. During his time in space, Frank successfully carried out 23 experiments in the fields of life and physical sciences and education.

On May 27, 2009 Frank launched aboard Soyuz TMA-15, becoming the first astronaut from the European Space Agency to command a space mission. He has spent a total of 198 days, 17 hours and 34 minutes in space!