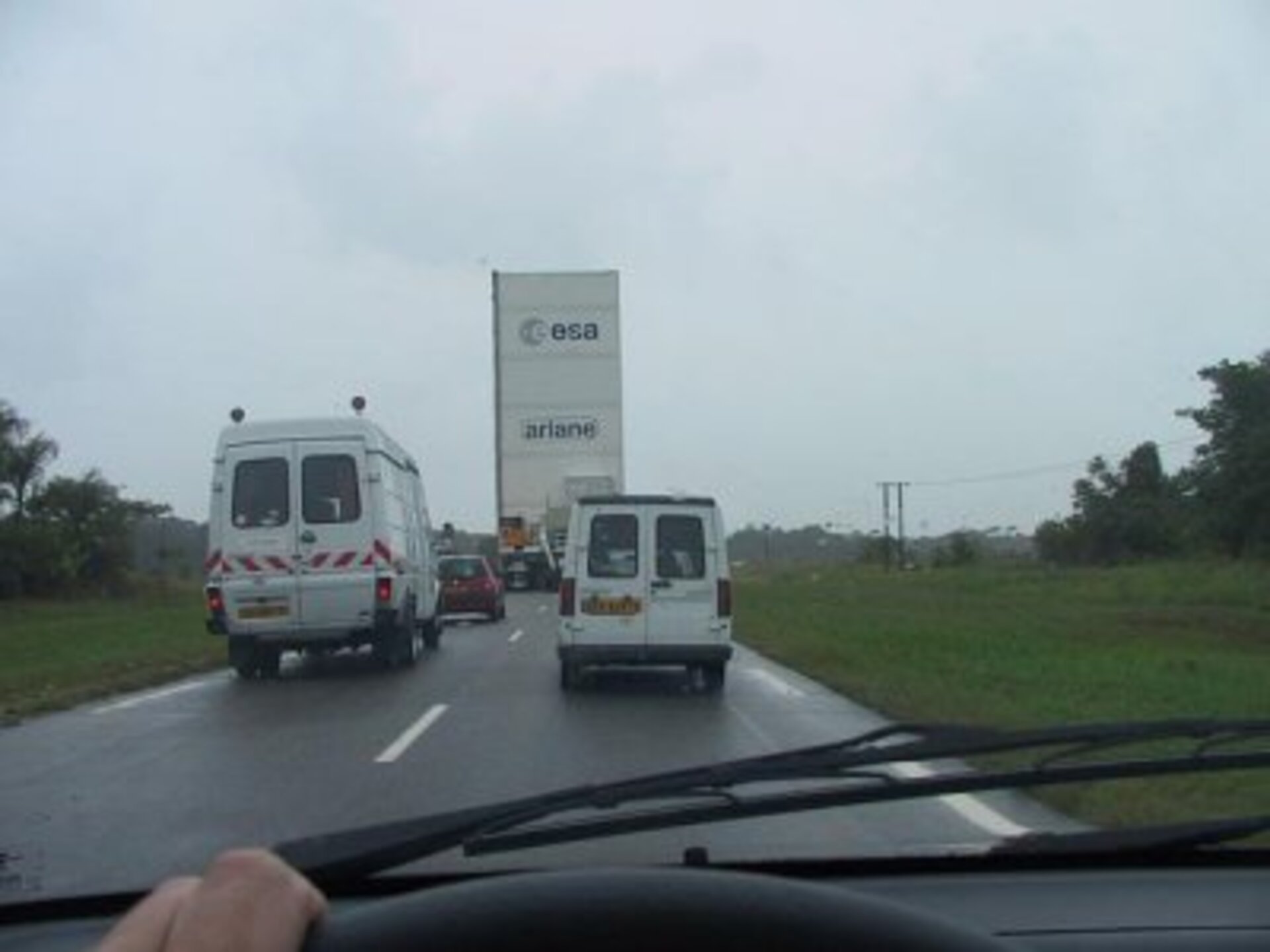 Today, Envisat was pushed inside the payload container on an air cushion pallet. This was done remarkably easily. This afternoon, Envisat left the S5 buildings under the wet eyes of the members of the team. Having worked for ten years on a project one cannot see the satellite moving away without a certain emotion. More than that, it was raining and the transportation had been delayed by slightly more than half an hour because of a small technical problem. The container arrived without any problems at the final assembly building after half an hour on the road at 15 km/h. Then, the container was pushed in the airlock of the final assembly building. At this time, the container is being cleaned outside to allow to open the door tomorrow.

The launcher activities are nominal and on schedule.

Today we received from Arianespace the latest version of the plan of Envisat/Ariane combined operations. The launch date is maintained on February 28, local time.

All the "red and green tag items", the parts which will need to be removed from Envisat (red) or which will need to be put on Envisat (green) were reviewed today. They are exactly 63 of them, properly listed and properly documented. The green tag items include notably the pyrotechnics arming plugs. And the red tag items include notably the optical aperture covers.

The satellite was left untouched today and yesterday. It waits for the move to the final assembly building on Wednesday.

The launcher is actually not quite ready to receive us. The thermal control of the fuel circuits of the second stage need still to be modified. This modification was recommended after the failure of flight 142. The consequence for us is that Envisat which should have been moved to the final assembly building on next Monday will only go on next Wednesday. This is, for the time being, without impact on our launch date.

Our launch date was confirmed by Arianespace this morning: February 28. No change. Intelsat will be launched at 4:00 in the morning (local time), during the night of February 22 to 23. Between the February 23 and 28, the Space Centre of French Guiana will just have time enough to reconfigure the launch base from a launch towards east (Intelsat) to a launch towards north (Envisat).

The most significant activities of the day are related to the radar: The mechanical tensions in the 8 storage mechanisms of the antenna were measured. They remain stable. The lead wires to the strain gauges which are used to measure the mechanical tension were cut as close to the gauges as possible and then grounded to prevent them to act as antennas and generate electromagnetic interferences. The consequence of this apparently simple cut is that we cannot re-tighten the mechanisms or change their cables any more. Or that would require a considerable preparation work! These cables have a lifetime of two months when tightened and they were installed on January 16. You can deduce our latest possible launch date. The only elements of the radar antenna which will need to be removed before flight are the protections on the wave-guides.

Many activities today on the launcher. The solid boosters, the first cryogenic stage, the second stage, the equipment bay, the electric systems, the shroud, the payload adaptor, the shock attenuation device, the cone, the umbilicals, they are all ready for the start of Envisat/Ariane combined operations.

Envisat: Today, the satellite was left untouched. Our combined operations with the launcher will start tomorrow, as planned. They are organized to lead to a launch on February 28 (Kourou time). Everything is nominal on this side.

Launcher: The assembly of the adapters between the satellite and the launcher, on top of each other, was checked. They fit. The tightness of the propellant circuits in the attitude control system, which gives the direction to the satellite at the time of the separation from the launcher was checked. Everything is nominal on this side also.

Miscellaneous: The operation director's car disappeared this morning, "borrowed" by mistake! However, he does not drive a Clio!

Envisat: No noticeable activity on the satellite today. Envisat waits.

Launcher: The satellite adaptor with the separation clamp band, the shock attenuator ring and the cone, which provide the liaison between satellite and launcher are being prepared. The second stage was the object of electric and functional tests: all nominal. The launcher is back to the nominal sequence of operations. The reorganisation of the campaign, consecutive to the failure of flight 142, is over.

Believe me, it was a very very quiet day. Today and tomorrow are bank holidays in French Guyana because, or thanks to, the Carnival. We were working, but there was no significant activity on the satellite. We wait. Actually, the only noticeable activity was the transport and the installation in the launch table of one of two electronic bays which is the interface between the control centre here and Envisat through the launcher umbilicals. The other bay stays next to the satellite for the operations which still have to be performed in S5.

In a couple of days I will have strictly nothing to write about the preparation of the satellite any more. Apart from some finishing details and the integration of the three baffles of the star tracker, Envisat is ready for launch! Today the two most significant activities were to rehearse, with success, the download of the flight software in a communication configuration identical to the launch configuration (last time, that did not work and another method of downloading the software was used) and to install the caps on the fuelling lines.

In the meanwhile, the preparation for the return of the hardware is seriously engaged. The main integration stand, the platforms, the scaffoldings have been stripped down. There is also a long row of boxes and containers ready for the return.

Launcher: I did not hear about the launcher today. Therefore, I conclude that their situation is nominal and that they are very busy!