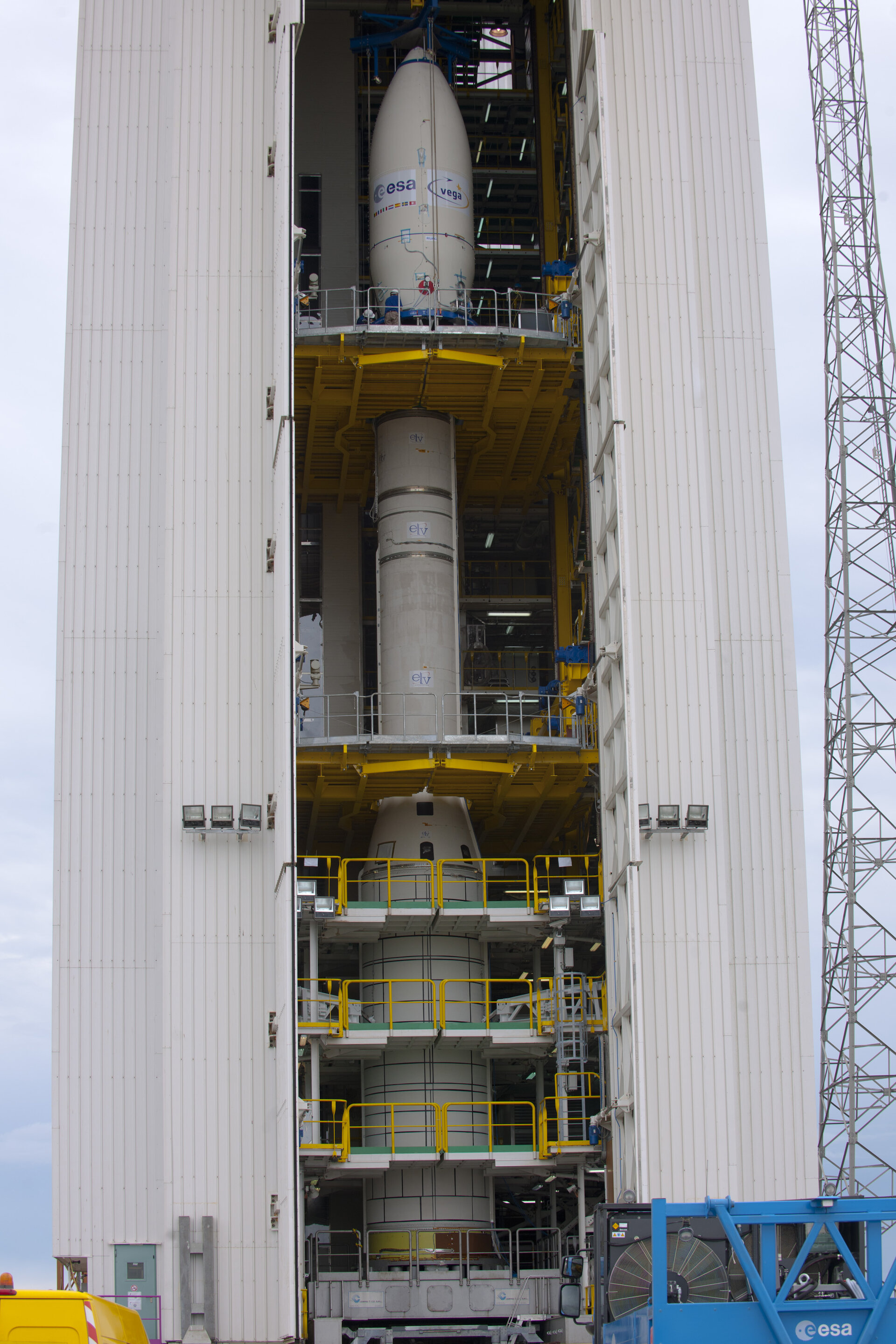 A full-scale mock-up of the new Vega launcher has been assembled on the vehicle’s launch pad at Europe’s Spaceport in French Guiana as part of the combined test campaign before the maiden flight later this year.

Last November saw the start of mechanical integration with the transfer of the launcher’s first-stage model, the P80 solid-propellant stage, to the pad.

The mock-ups of the other three stages, Zefiro-23, Zefiro-9 and AVUM, and the payload composite were then transferred and integrated in the mobile gantry, where launch preparations take place.

Vega assembly was completed last week with the addition of the payload composite, comprising a payload mock-up, the payload adapter and the fairing. The composite was first transferred from the payload preparation building to the launch zone and then hoisted onto the vehicle.

The combined testing phase now involves the verification of mechanical and electrical interfaces between the vehicle and the ground segment.

It includes the validation of operational procedures for integration of the launcher, the checkout verification, the loading of liquid propellants and the final preparation and readiness for countdown.

The electrical campaign is testing avionics and software in order to verify both the ground segment and the launcher equipment. Most of the automatic procedures to control and monitor the launch system have now been validated.

The remaining procedures relate to the countdown and specific Vega avionics, such as the thrust vector control system.

On the mechanical side, the effort is moving on to the verification of procedures in cases where specific components and equipment need to be dismounted and replaced when Vega is fully integrated in the mobile gantry.

Fluid tests are also being prepared; the AVUM restartable fourth stage will be filled with real propellants, which will finally validate the readiness of all launcher and ground segment procedures.

In the coming months, the Flight Readiness Review will give the final green light for the first launch, the Vega qualification flight, in the second half of 2011.

This flight will pave the way for five missions to demonstrate the system's flexibility.

“The combined tests have reached an important milestone with the full integration of the launcher mock-up,” said Stefano Bianchi, ESA’s Vega Programme Manager.

“This major step in the operational qualification of the Vega launch system takes us closer to this year’s qualification flight.”

“The achievements during this unique and exciting validation phase couldn’t have been reached without the dedication and competence of the operational teams,” said Renato Lafranconi, responsible for the combined test campaign at ESA, “namely ELV SpA, Avio, Europropulsion, Regulus, RUAG, Vitrociset, Carlo Gavazzi Space and Rheinmetall, and the CNES teams, the ESA Integrated Project Team and Arianespace.

Altogether, seven ESA Member States (Italy, France, Spain, Belgium, the Netherlands, Switzerland and Sweden) are contributing to the programme. ELV SpA is the launch vehicle industrial prime contractor (70% of which is owned by Avio SpA and 30% by the Italian space agency, ASI) and Vitrociset is the ground segment prime contractor.