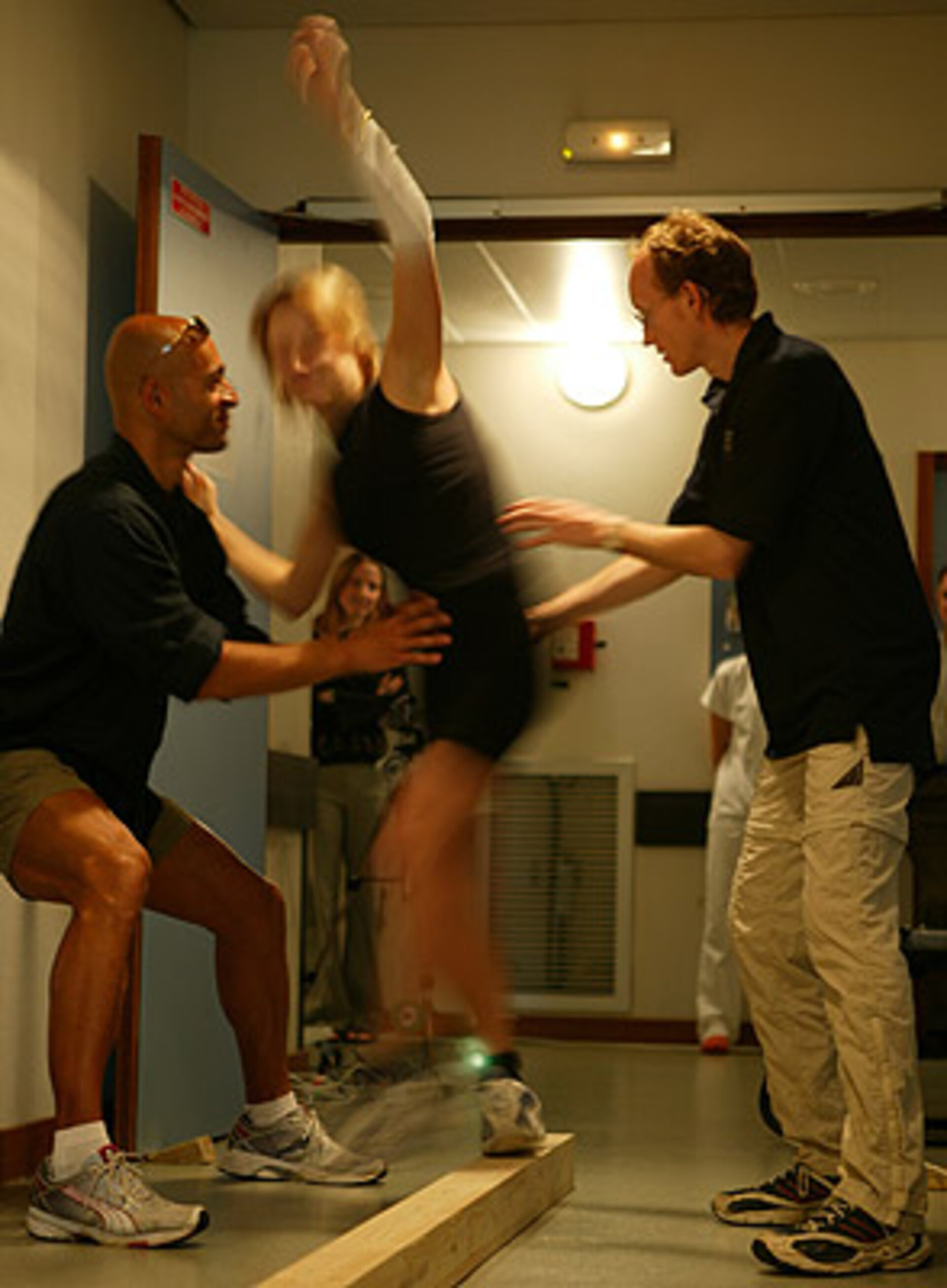 The day I stood up will remain one of the best memories of my life, like being reborn again. I could not believe that walking could be forgotten. During the whole bed rest, even in the last days, I was sure that I could get up and run around the building with ease, I felt so good!

Then the big day arrived. I was put on the tilt-test bed, brought up in the standing position and… I lasted 4 and ½ minutes in this position before the bed was taken down, I was so close of passing out. My heart rate was 130 just from being in upright position, I felt massive heat waves like a menopausal woman and my legs were so heavy.

Next I had to get up by myself to do a balance test. My legs felt even heavier - as if some one had added 10kg to both ankles. It was as if my legs did not clearly receive the order to walk from my brain. I felt my head spinning and heat waves indicating low blood pressure. I had to sit down again a few times.

I went to take a look at myself in the mirror for the first time (yes, I have lost weight indeed!). Walking back to my room I realised I needed the toilet again, but I had no more courage/energy, so my first pee standing up was done…lying in bed, just like the previous 60 days! I also ate my first lunch sitting on my bed, since the thirty metres separating me and the dining room were too much even though I had dreamt about sitting and eating at a table.

Then I ventured outside. The smell of flowers coming from all directions was overwhelming, so strong, and how warm the weather was! When I started my hibernation in February it was roughly 10 degrees, now it was about 26! I just wanted to carry on walking and walking, but I soon started to feel pain in my muscles and on the soles of my feet.

It was a dilemma. I wanted to walk, but my commonsense told me not to. The more I would walk now, the more I would be in pain the next day. So I took over a new vehicle, a wheel chair, for a few hours.

The next day I was indeed in considerable pain. I knew that for a fact even before opening an eyelid. The soles of my feet were on fire and so were my muscles. I felt so much in pain that I forgot to enjoy my first shower in upright position. All I could feel were my legs and my feet. But I was still so happy to be up.

I was proud of myself “I did it, I took the challenge and I finished it”. What an adventure! After that every morning for the next ten days, muscle pain and sore soles were the main problem. After an hour or two, the body “oiled the mechanism” and walking became smoother. It was very amusing to compare the feelings and pain locations with others, the space clinic had become an institute for elderly people!

One thing in particular: the back pain that had bothered me during the whole bed rest period completely disappeared the moment I stood up! I had thought that I was made for bed rest because of I so easily adapted to the conditions, but I had to admit that my body did not agree; I guess that my back tells me I’m not supposed to lie down for 60 days after all.

During the first ten days following the bed rest we had all kinds of scientific protocols to evaluate our physical state, but during the last ten days we only had revalidation, since all the scientists had returned to their countries. By now the weather in Toulouse was fantastic and we were quite tempted to spend time outside in the sunshine, reading books and chatting. I have to say it was not an easy mission to choose clothes for the whole experience: when I left Finland it was –20 degrees and when I left the centre it was close to +30!

Right after leaving the centre I took a well deserved two-week holiday (lying down was a tough job!). Since I have lived in France for seven years in the past, I have friends in various places, so I went to Paris for few days.

The very next day after leaving the centre I rented a bicycle in Paris and rode all over my beloved city for hours, already forgetting that I just came out of an institute. I cycled for over 30 km, and, in all honesty, there were more aching muscles the next morning.

I also visited Asterix Parc, a fun park just outside Paris, jolting my balance organs back to normal function on several roller coaster rides. Although I usually feel fine in roller coasters, I have to admit that I felt a bit sick at the end of the day!

From exciting Paris I went to visit a friend in Switzerland. Switzerland equals mountains. Obviously there’s no trip to this country without trekking in the mountains like Heidi, singing Edelweiss. I believe though that the beauty of the mountains is in direct correlation with the amount of pain in my muscles the next day. And those mountains were beautiful.

I ended my Tour d’Europe in sunny Nice meeting long lost friends, getting a bit of a tan and admiring Monaco and the Mediterranean sunset.

Arriving back to Finland, I was really thrilled to see my family again. My parents had built a new house for their retirement and I was very excited to finally see it. I had heard so much about it on the phone.

It might sound like a bit of a cliché, but as a Finn the first thing I did was to take a sauna. This might actually be the only thing I missed during my bed rest period! That sauna was so good. It washed away my tired skin and opened up the pores. It made me feel as if the whole experience was just a dream. How quickly one forgets! Did I really lie in bed for 60 days? I have the muscle biopsy scars as proof that I really did it.

I really don’t have many other signs – physical or psychological - of my stay in Toulouse. A healthy human body seems to recover incredibly fast. I was able to swim 1 km without any problems before the bed rest. Today I went to a swimming pool and wanted to see how far I could go. I did that same kilometre without any trouble. I think I’m nearly fully recovered!

Ever since returning home on 17 June, I’ve taken a sauna every day, met my friends, family and neighbours, cooked, gone shopping, organised my things in my parents’ brand new house, been invited on Finnish television, prepared for my return to Toulouse and a (brief) visit in Cologne.

Life has been more than busy. I think I’ve never been busier, but I enjoy every moment of it. I think I’ve been inactive long enough, now it’s time to act. I feel so full of energy, a real feeling of rebirth, I want to do everything and I think I am capable of nearly everything. Maybe the bed-rest also gave me inner strength and faith in my body.