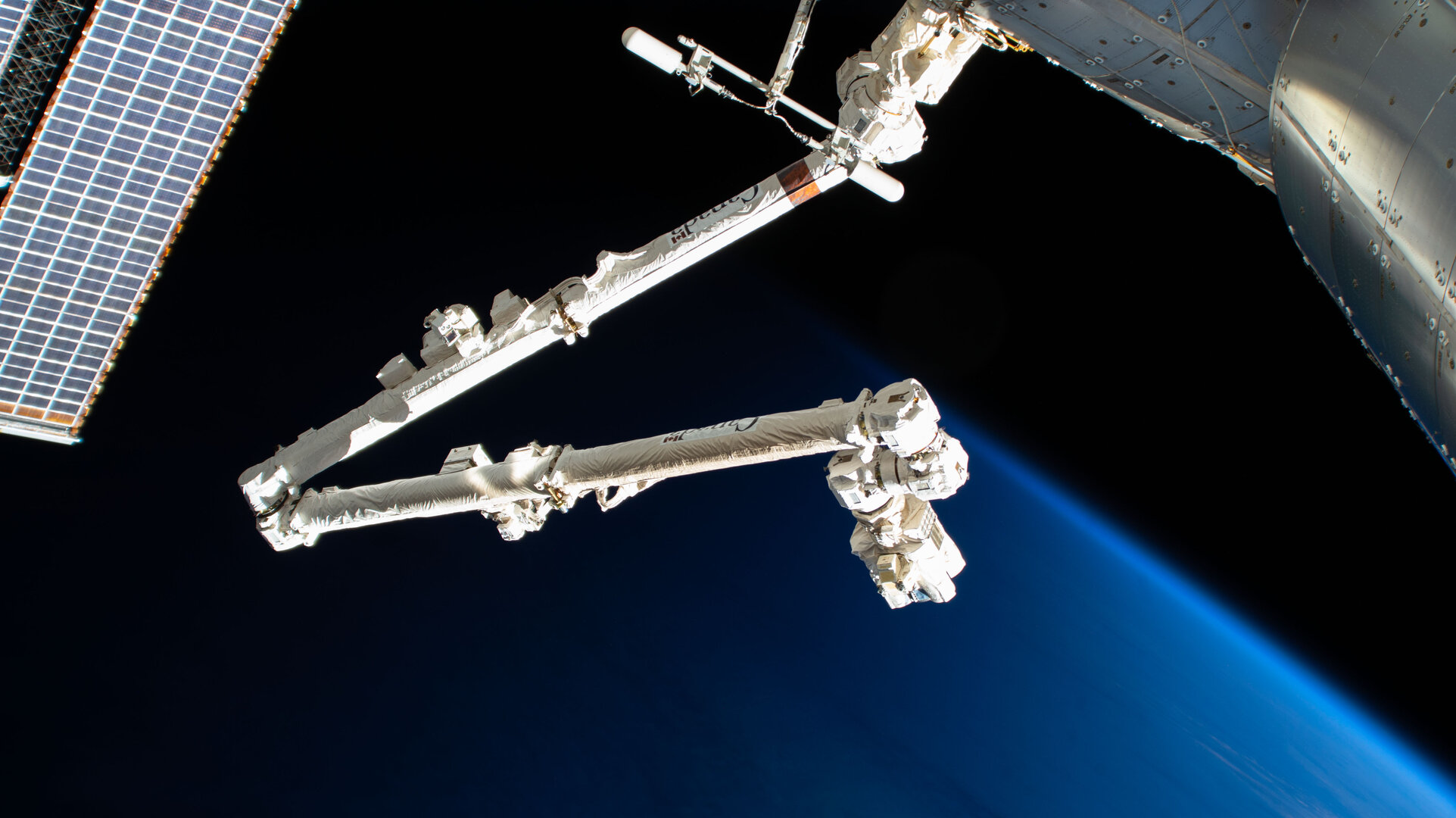 Despite challenges posed by the coronavirus pandemic, teams in space and on the ground have been hard at work over the past month to keep science up and running on the International Space Station.

With the three-person crew preparing to become six again for a brief time in April, we take a look at what has been happening onboard humankind’s only orbital outpost over the past four weeks – including the arrival of some exciting European cargo.

In the belly of a Dragon

Towards the start of the month, NASA astronaut Jessica Meir grappled a visiting Dragon – a SpaceX Dragon spacecraft that is. Carrying over 1950 kg of cargo including Europe’s new external experiment-hosting facility Bartolomeo, the cargo craft arrived on 9 March, joining three other spacecraft currently docked to the Station.

The Bartolomeo facility, built and operated by Airbus and hosted by ESA, attaches to the exterior of Europe’s Columbus laboratory. Designed to provide new scientific opportunities on the outside of the Space Station for commercial and institutional users, the facility offers unobstructed views toward Earth and into space. Applications include Earth observation, robotics, material science and astrophysics.

Earlier spacewalks prepared Columbus’ hull to receive the new host facility by adapting support pins to which Bartolomeo will connect. Two weeks ahead of the Dragon launch, Jessica set up hardware inside the Station to provide a connection with the new facility. On 24 March the Space’s Station’s robotic Canadarm2 was used to gently pluck Bartolomeo from the Dragon, and place it in a temporary parking position on the outside of the US Laboratory. Then, on 31 March, more robotic operations were conducted to move Bartolomeo to the outside of Columbus, to await installation by astronauts.

Astronauts will perform a further spacewalk to install Bartolomeo in the next few months, together with a new terminal called ColKa that will enable close to instantaneous transmission of data from Columbus to Earth.

Other European cargo in the Dragon included parts for the Materials Science Laboratory, radiation dosimeters and medical equipment for the Myotones experiment that monitors the tone, stiffness and elasticity of astronauts’ muscles.

Myotones operations will continue after Easter with support from CADMOS (the centre for the development of microgravity applications and space operations) in Toulouse, France. Scientists from the University of Southampton in the UK, Charité Medical University in Berlin, Germany, and the German Sport University in Cologne, Germany, will be on hand to guide astronaut Chris Cassidy through Myotones procedures with the help of ESA’s specialist communicators, known as Eurocoms, at the European Astronaut Centre in Cologne, Germany.

Another new European addition to the Station with the Dragon is an experiment called Canes. This experiment from French space agency CNES seeks to understand how ligneous (woody) plant prunings, known as canes, are affected by a long storage period in microgravity and whether they can grow into viable plants upon their return to Earth.

By understanding any physiological or metabolic changes these canes undergo in microgravity, researchers seek to determine whether ligneous plants could be grown in space. It could also lead to the discovery of new biologically-active products that would be of interest to the food, pharmaceutical and cosmetic industries.

The experiment will see two grape vines kept cool in the Space Station’s Minus Eighty-Degree Laboratory Freezer, MELFI, putting the plants into hibernation so they do not require nutrients or water.

March also marked the conclusion of multiscale boiling experiment Rubi– an experiment to better understand the boiling process, which has now produced around 4.7 TB of data that is being analysed by scientists on Earth.

After decommissioning Rubi, Jessica installed a new experiment in Columbus’ Fluid Science Laboratory (FSL) known as Foam-Coarsening. This experiment, developed by Airbus for ESA, builds on a series of investigations to better understand the behaviour of foam in space.

Through the Foam-Coarsening experiment, researchers will investigate foam behaviour at different liquid stages, particularly as it transitions from a solid- to liquid-like state.

The results from this research go beyond just the foam in your morning cappuccino. Foams are used in a wide range of areas from food production to cleaning and sealing products, cosmetics and personal hygiene products, and even construction. However, scientific knowledge of liquid foams is extremely limited due to their instability on Earth. Gaining a better understanding of their properties with the help of microgravity could help improve foam control or process design in industry.

Just like Rubi, the Foam-Coarsening experiment is supported by the Belgian User Support and Operations Centre (B.USOC). Operations centres such as B.USOC act as the link between scientists and the International Space Station, taking responsibility for the preparation and operation of experiments in contact with other ground control stations across Europe.

From the brand new to the more familiar: research into the effectiveness of antimicrobial materials in microgravity is ongoing throughan experiment called Matiss.

Commissioned by ESA astronaut Thomas Pesquet during his Proxima mission, this experiment has been running in different forms on the Station since 2016. It aims to understand how ‘smart surfaces’ on the International Space Station could stem the spread of pathogens, with potential to help the development of antimicrobial surfaces for use on elevator buttons and door handles, bars, public transport and other high-traffic areas on Earth. Findings will also be of value in the design of future spacecraft, where the need to reduce the risk of illness or infection for astronauts is even greater than in low Earth orbit.

The second set of Matiss surface samples were returned to Earth in September 2019 for analysis. At this time, NASA astronaut Andrew Morgan also installed a new set of two sample holders in Columbus for a period of six months. These aim to test new patterned hydrophobic (liquid-repelling) surfaces. 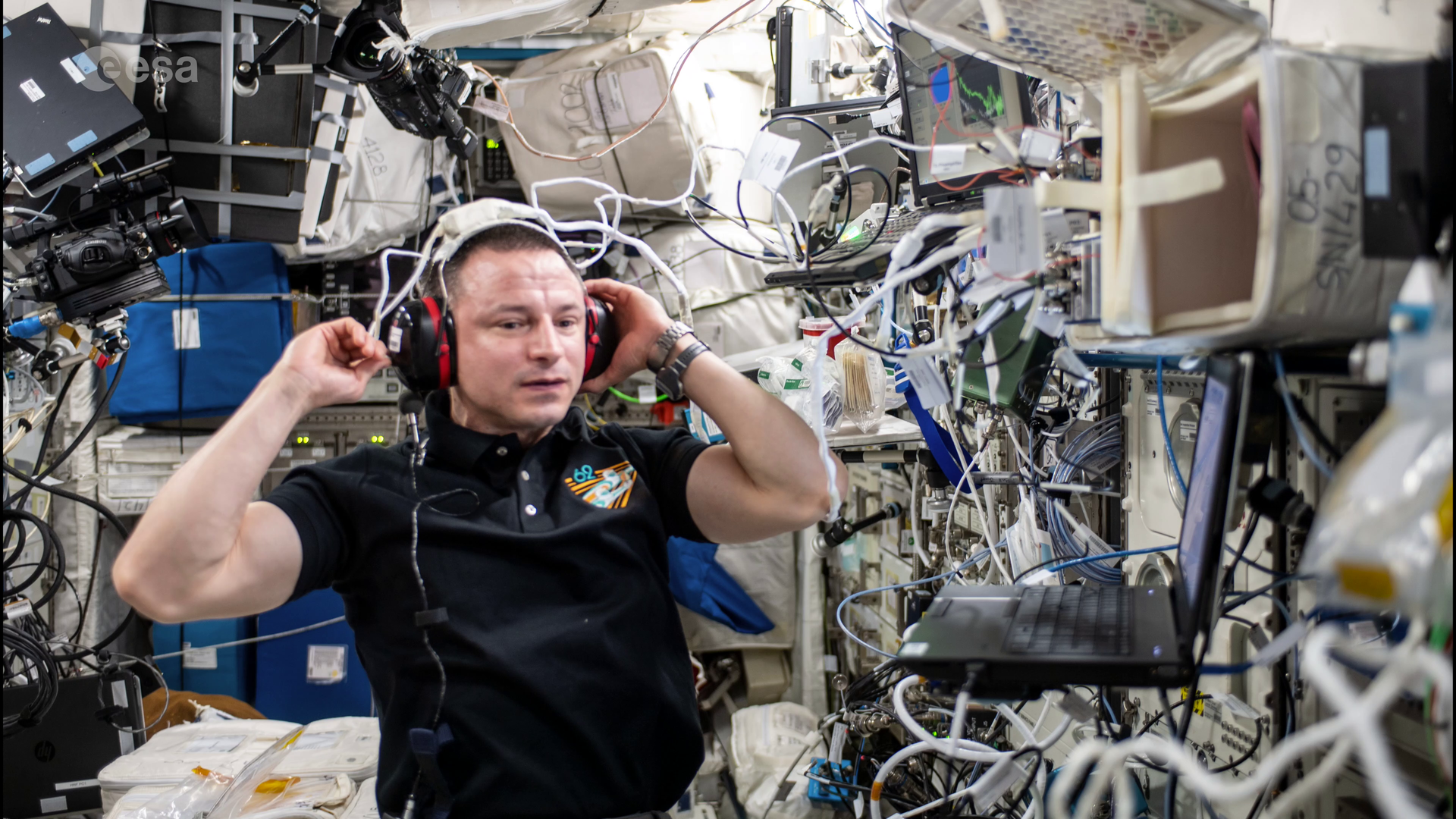 As this summary of Space Station science draws to a close, so too has the final session of Italian space agency ASI’s experiment Acoustic Diagnostics with Andrew Morgan. Drew performed his last session on 20 March. The sessions are relatively passive for crew members as inner ear sensors detect the movement of hairs in response to auditory stimulation.

ESA astronaut Luca Parmitano also participated in this study during his Beyond mission. It aims to assess the possible adverse effects of noise and the microgravity environment of the Space Station on human hearing. If you are interested in hearing what astronauts hear during this experiment as well as some of the other sounds of space, tune into episode four of the ESA Explores Beyond series podcast.