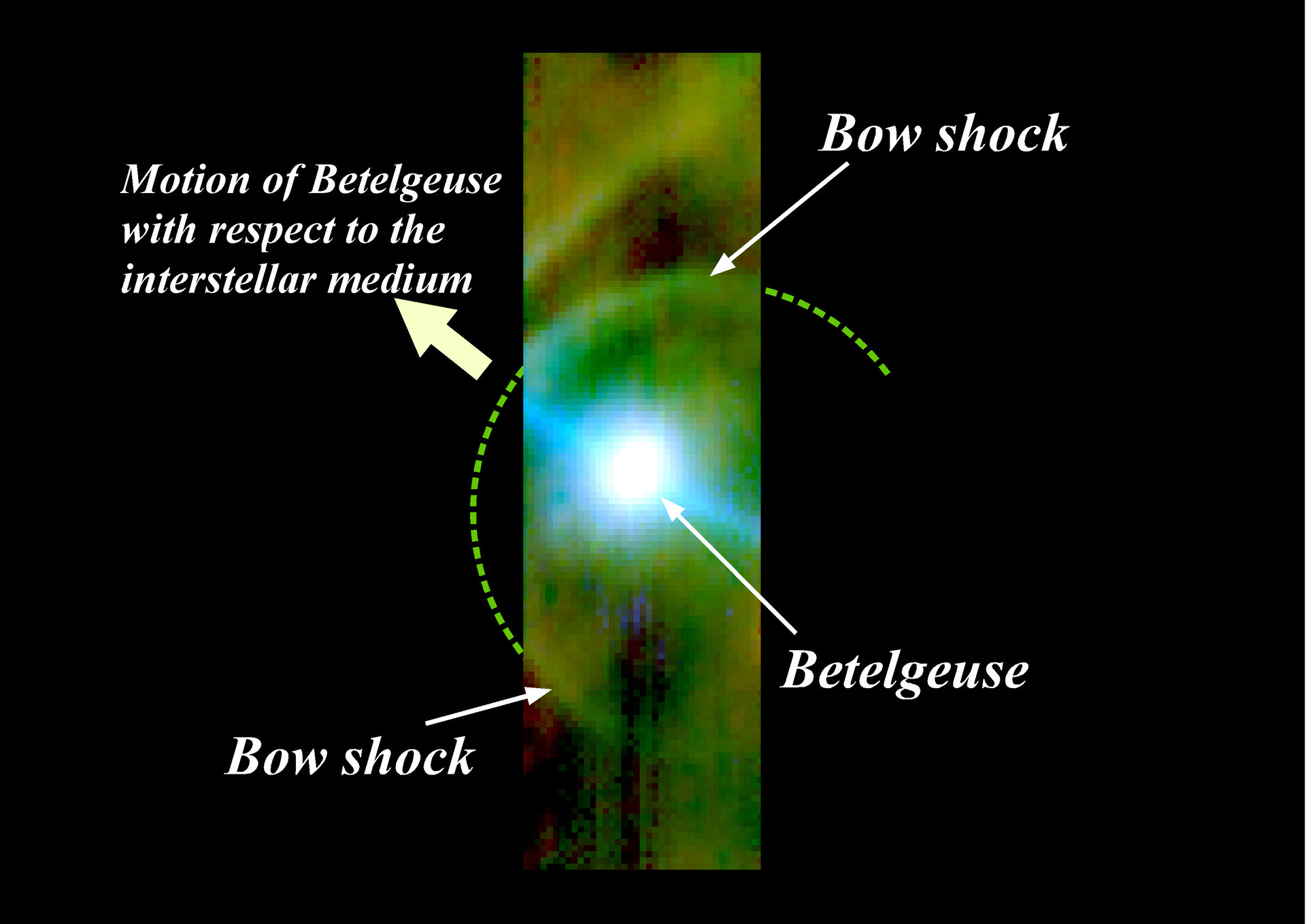 The Akari infrared surveyor, a Japanese Aerospace Exploration Agency mission with ESA participation, has returned a host of new results. From splashes in cosmic rivers of dust and gas to supernova remnants, the mission has been uncovering secrets of the cold and dusty Universe.

Splashes in the interstellar medium

Akari observations of Betelgeuse, a bright red supergiant star located in the constellation Orion about 640 light-years from Earth, show the star making a big splash by creating a bow shock as it crosses the interstellar medium. Researchers have found a strong flow of the interstellar medium around the star which originates from star-forming regions in Orion's Belt.

Stars condense out of the interstellar medium at birth, and old stars like Betelgeuse spew out matter into surrounding space, enriching the interstellar medium. This process is repeated by generations of stars and assists the chemical evolution of the Universe. Akari has found a number of such bow shocks and investigation into these processes will further our understanding of the cosmic recycling of matter.

Globular clusters are spherical groups of a hundred thousand to a million stars that are found throughout our and other galaxies. A one-off star formation process in each system about 10 thousand million years ago triggered the formation of these globular clusters.

Aged stars often eject large amounts of gas and dust into interstellar space, which eventually forms a new generation of stars and planets, so scientists expected to detect cold dust in the 12 globular clusters observed by Akari. But high-sensitivity observations with the Far-Infrared Surveyor onboard Akari yielded no evidence of cold dust in any of the clusters.

One possibility is that the dust accreted on to the stellar surface. But such a process would take much longer than the lifetime of the cluster. The new Akari observations pose new questions to astronomers.

At the end of their lives, massive stars explode in a catastrophic explosion, returning a huge amount of energy and heavy elements into space. Scientists believe that the explosion destroys the surrounding interstellar dust grains, leaving behind a supernova remnant which can be studied to understand the explosion itself as well as its role on the evolution of the interstellar medium.

The study of interstellar dust is important because that very dust is a seed of another star as well as of a planet like Earth.

The Large Magellanic Cloud is a companion galaxy of the Milky Way located at a distance of about light-years from us. Its relatively short distance and unique location provides a unique view of the entire galaxy from Earth and the possibility to study the interstellar medium.

Akari observations of about eight of the 20 reported supernova remnants in the region have revealed unexpected details.

Akari has found that supernova remnants in the Large Magellanic Cloud are surrounded by previously-unknown warm dust. This suggests that some dust grains survive the shock of the supernova explosion. Further analysis with the Akari data will greatly improve our knowledge on supernova remnants and their influence on their surroundings.

Akari was launched on 21 February 2006 and began its scientific observations in May 2006.

Its on-board supply of liquid helium ran out on 26 August 2007, and the spacecraft entered a new mission phase. The liquid helium was required to keep Akari cold enough to observe in the far-infrared. The warm phase now uses the surviving instrument, the near-infrared mode of the infrared camera, which can operate under the warmer conditions provided by the on-board mechanical cooler for near-infrared observations.

Akari achieved its planned ‘cold’ lifetime of 550 days. During this time, it conducted an all-sky survey in the infrared, covering about 94 % of the entire sky, with larger wavelength coverage and better spatial resolution than its predecessor, IRAS. The first version of the resulting catalogue has just been released to the project teams. The public release is planned for autumn 2009. Akari also carried out more than five thousand individual pointed observations.

Akari is a Japanese Aerospace Exploration Agency, JAXA mission with several participating partners: Nagoya University, The University of Tokyo and National Astronomical Observatory Japan; ESA; Imperial College London, the University of Sussex and The Open University, UK; the University of Groningen/SRON, The Netherlands; the Seoul National University, Korea. The far-infrared detectors were developed in collaboration with the National Institute of Information and Communications Technology Japan.

ESA’s European Space Operations Centre (ESOC) in Darmstadt, Germany, provided the mission with ground support through its ground station in Kiruna, for several passes per day in the cold phase of the mission. ESA’s European Space Astronomy Centre (ESAC), Madrid, Spain provides expertise and support for the sky-survey data processing through the pointing reconstruction – this allows the determination of accurate astronomical positions for each of the sources detected. The goal is to accelerate the production of the survey catalogues as a legacy for Herschel and Planck.

ESAC also provides user support for European astronomers who have been granted observing opportunities. The 10% of observing time obtained from this collaboration resulted in 400 observations in the cold phase, covering various fields of astronomy, from comets to cosmology. A second call for proposals for 700 observations in the first year of the warm phase was issued in May 2008. The open time observations, included the European ones, started on 15 October 2008.