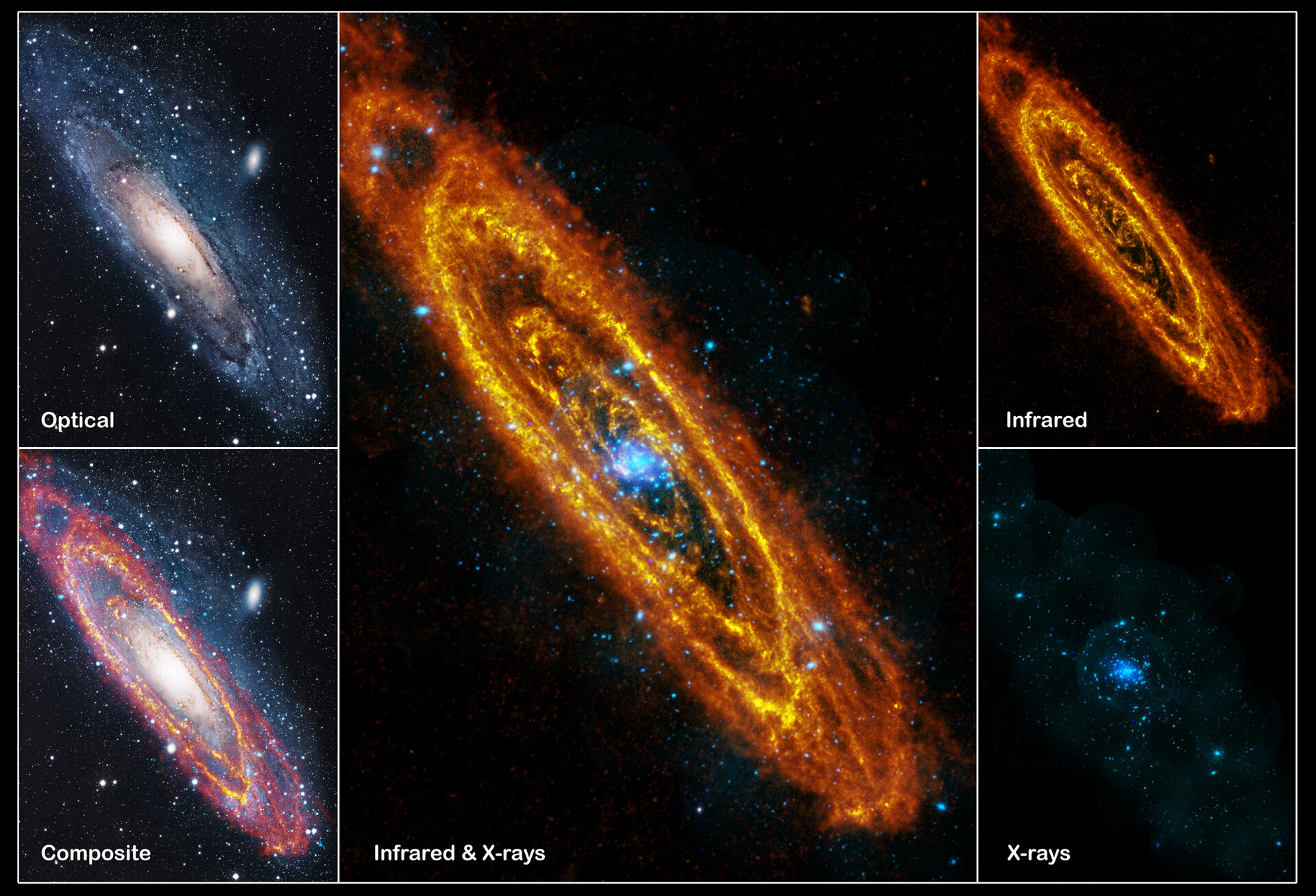 Two ESA observatories have combined forces to show the Andromeda Galaxy in a new light. Herschel sees rings of star formation in this, the most detailed image of the Andromeda Galaxy ever taken at infrared wavelengths, and XMM-Newton shows dying stars shining X-rays into space.

During Christmas 2010, ESA’s Herschel and XMM-Newton space observatories targeted the nearest large spiral galaxy M31. This is a galaxy similar to our own Milky Way – both contain several hundred billion stars. This is the most detailed far-infrared image of the Andromeda Galaxy ever taken and shows clearly that more stars are on their way.

Sensitive to far-infrared light, Herschel sees clouds of cool dust and gas where stars can form. Inside these clouds are many dusty cocoons containing forming stars, each star pulling itself together in a slow gravitational process that can last for hundreds of millions of years. Once a star reaches a high enough density, it will begin to shine at optical wavelengths. It will emerge from its birth cloud and become visible to ordinary telescopes.

Many galaxies are spiral in shape but Andromeda is interesting because it shows a large ring of dust about 75 000 light-years across encircling the centre of the galaxy. Some astronomers speculate that this dust ring may have been formed in a recent collision with another galaxy. This new Herschel image reveals yet more intricate details, with at least five concentric rings of star-forming dust visible.

Superimposed on the infrared image is an X-ray view taken almost simultaneously by ESA’s XMM-Newton observatory. Whereas the infrared shows the beginnings of star formation, X-rays usually show the endpoints of stellar evolution.

XMM-Newton highlights hundreds of X-ray sources within Andromeda, many of them clustered around the centre, where the stars are naturally found to be more crowded together. Some of these are shockwaves and debris rolling through space from exploded stars, others are pairs of stars locked in a gravitational fight to the death.

In these deadly embraces, one star has already died and is pulling gas from its still-living companion. As the gas falls through space, it heats up and gives off X-rays. The living star will eventually be greatly depleted, having much of its mass torn from it by the stronger gravity of its denser partner. As the stellar corpse wraps itself in this stolen gas, it could explode.

Both the infrared and X-ray images show information that is impossible to collect from the ground because these wavelengths are absorbed by Earth’s atmosphere. The twinkling starlight seen from Earth is indeed a beautiful sight but in reality contains less than half the story. Visible light shows us the adult stars, whereas infrared gives us the youngsters and X-rays show those in their death throes.

To chart the lives of stars, we need to see it all and that is where Herschel and XMM-Newton contribute so much.