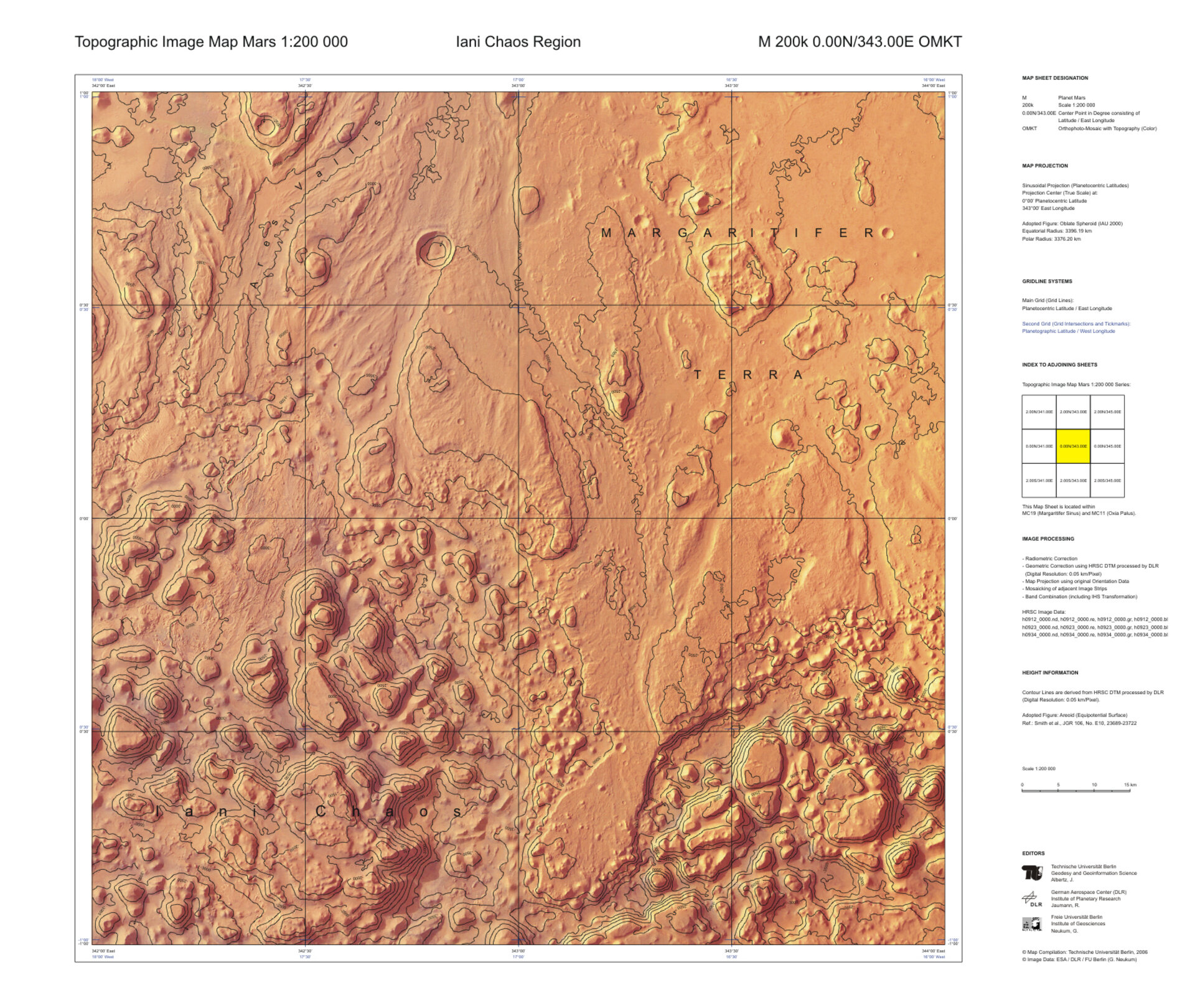 Scientists using data from the HRSC experiment onboard ESA's Mars Express spacecraft have produced the first 'hiker's maps' of Mars. Giving detailed height contours and names of geological features in the Iani Chaos region, the maps could become a standard reference for future Martian research.

The maps are known as topographic maps because they use contour lines to show the heights of the landscape.

The contour lines are superimposed upon high-resolution images of Mars, taken by the High-Resolution Stereo Camera (HRSC) onboard Mars Express. On Earth, such maps are used by hikers and planning authorities.

They are known in the UK as ordinance survey maps. Every country has its own equivalent. The contour lines themselves were determined using data from the HRSC.

This data has been transformed into three-dimensional computer models of Mars, known as the HRSC Digital Terrain Models (DTMs).

The new maps have been produced under the leadership of the Principal Investigator (PI) G. Neukum (Freie Universität Berlin), as part of the effort of the science and experiment team of the HRSC experiment, by J. Albertz and S. Gehrke of the Institute for Geodesy and Geoinformation Science, Technische Universität Berlin, in cooperation with the German Aerospace Centre (DLR), Institute of Planetary Research, Berlin.

The researchers chose the Iani Chaos region because of its major topographical interest. It is covered in individual blocks and hills that form a chaotic pattern across the landscape.

These 'islands' of rocks are likely all that remains of a previous surface of Mars. The areas in between the islands collapsed when cavities formed below the surface. Initially these cavities may have been supported by the presence of ice, which melted due to volcanic heat. As the water flowed out into Ares Vallis, towards the northern lowlands of Mars, the landscape collapsed and formed the Iani Chaos region we see today.

The contour lines help the eye to understand the morphology of the surface shown in the images. On most of the maps, each line represents a difference of 250 metres in height. The maps also display the names of geographical features and the lines of Martian longitude and latitude.

The maps are a demonstration of the kind of products that can be derived from the HRSC experiment. The HRSC is on the way to providing enough data to create such maps for the whole of Mars. This would generate 10 372 particular map sheets, each covering an equal area of the Martian surface. The maps would be to a scale of 1:200 000.

Up to now, some map sheets have been created as examples within the scope of the German HRSC experiment funding. A realization of the map series could only be carried out within a currently discussed comprehensive effort towards a planetary mapping programme at the European level.

Gerhard Neukum, Freie Universität Berlin, is the HRSC Principal Investigator (PI). The science team consists of 45 co-investigators from 32 institutions, spread across 10 countries. HRSC was developed under the leadership of the PI at the German Aerospace Centre (DLR) and built in cooperation with industrial partners, EADS Astrium, Lewicki Microelectronic GmbH and Jena-Optronik GmbH.