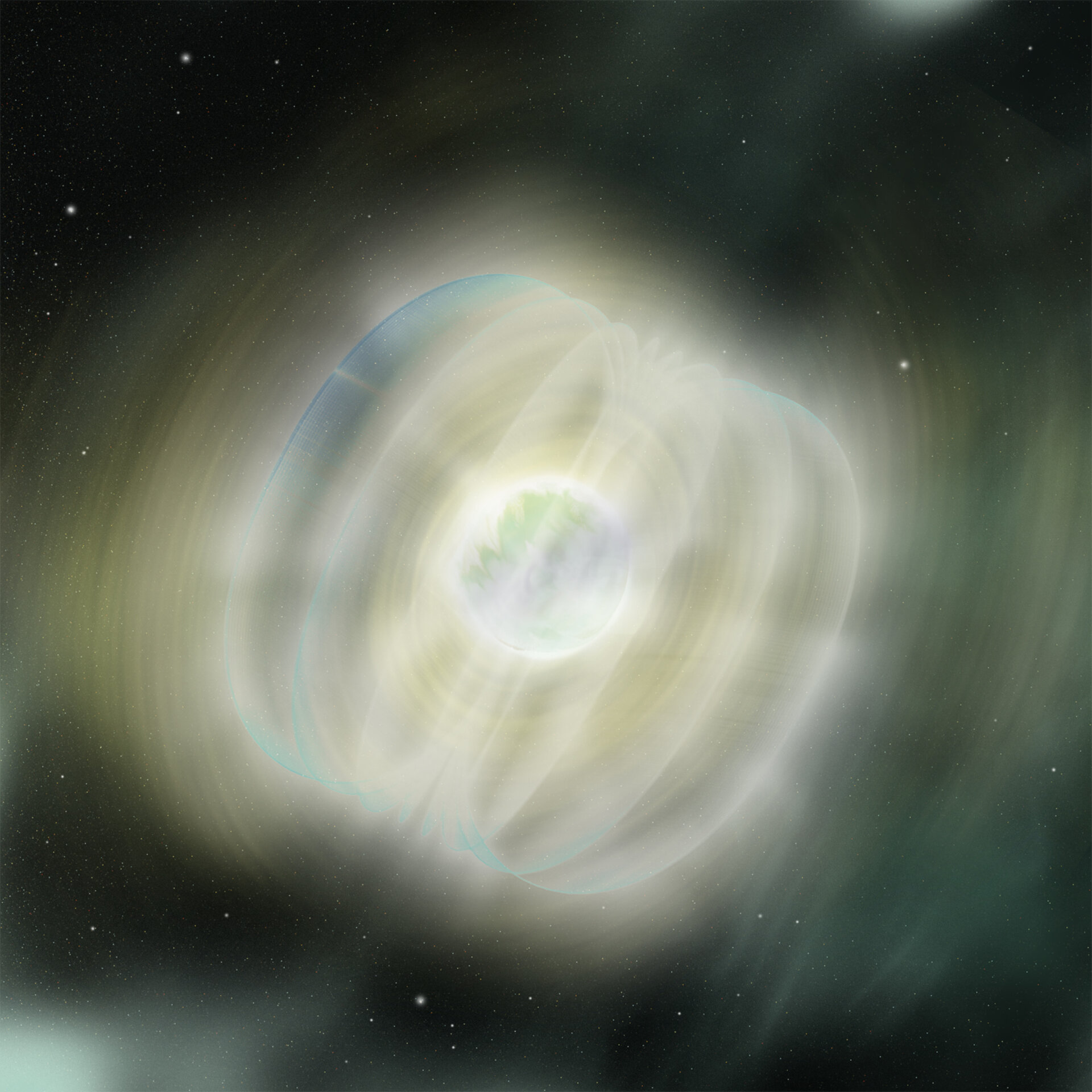 Astronomers using data from several X-ray satellites have caught a magnetar – the remnant of a massive star with an incredibly strong magnetic field – in a sort of giant cosmic blench.

When it comes to eerie astrophysical effects, the neutron stars commonly known as magnetars are hard to beat. The massive remnants of exploded stars, magnetars are the size of mountains but weigh as much as the sun, and have magnetic fields hundreds of trillions of times more powerful than the Earth’s, which pushes our compass needles north.

Now astrophysicists have managed to catch a recently discovered magnetar in a sort of giant cosmic hiccup that still has them puzzled. In multiple reports in the Astrophysical Journal and Monthly Notices of the Royal Astronomical Society, the researchers describe the behaviour of this body, located in a star cluster about 15 000 light-years away in the Ara constellation in the southern hemisphere. The magnetar goes by the unwieldy official name CXOU J164710.2-455216, or more informally, the ‘Westerlund 1 magnetar.’

"We only know of about a dozen magnetars," says Michael Muno, a scientist at the California Institute of Technology's Space Radiation Laboratory, and the original discoverer of the magnetar in 2005. "In brief, what we observed was a seismic event on the magnetar, which tells us a lot about the stresses these objects endure."

In September 2005, about a year after Muno found the magnetar, the object produced a burst that luckily came at a time when it was being heavily observed with several satellites, including the European Space Agency's X-ray satellite, XMM-Newton, and NASA's Swift X-ray and gamma-ray observatory. Just five days before the burst, Muno and his collaborators had been looking at the magnetar with XMM-Newton and saw it in the relatively calm state in which he had originally found it.

As most magnetars do, it produced a beam of X-ray light that, like the beam from a lighthouse, swept across Earth once every ten seconds. This allowed its rotational rate to be determined very precisely. The event that produced the burst also caused the magnetar to shine 100 times more brightly, created three separate beams that sweep past Earth where previously only one had existed, and sped up its rotation rate by about a thousandth of a second.

Muno says more work is required to understand what happened with the magnetar, because it is built of matter far denser than anything on Earth, and its composition is still a mystery.

However, it is possible to make educated guesses by extending theories developed to explain other neutron stars. The magnetic fields inside the neutron star are probably wound up, like a twisted spring. In a manner somewhat similar to plate tectonics here on Earth, as the magnetic fields unwind, they put stress on the outer crust. The crust would resist these stresses for a while, but would eventually fracture, producing a seismic event. The fractures would cause the magnetar's surface to shine brightly from multiple sources.

Also, there is reason to think that part of the interior of the neutron star is liquid and may be rotating faster than the crust. The seismic event could cause this fluid to become attached to the crust, so that the outer crust would speed up slightly.

"So we think the crust cracked," Muno says, adding that the observations are important for two reasons. "First, we have now seen another way in which these exotic objects dissipate their internal fields as they age.”

"Second, this event was only spotted because a team of us were concentrating hard on this newly discovered object," he adds. "The fact that we saw the event only a year after we discovered the magnetar implies that dozens more could be lurking in our Galaxy."

"If we find many more of these magnetars, we will have to re-evaluate our understanding of what happens when stars die," says Gianluca Israel, an Italian astronomer who is publishing a separate paper on the magnetar with his collaborators in the Astrophysical Journal.

Muno is lead author of a paper appearing this week in Monthly Notices of the Royal Astronomical Society.