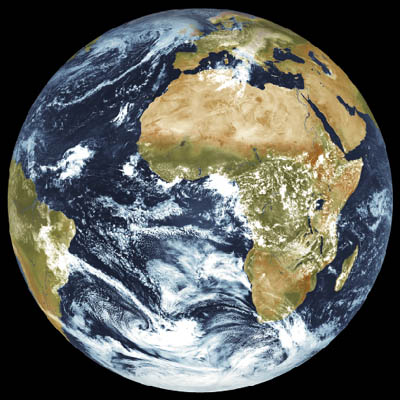 Everyone on Earth is a traveller through space. First, the Earth zooms around the Sun at a speed of 30 km/s – 45 times faster than Concorde. It takes 365 days (one year) to complete one orbit of the Sun.

It also spins very quickly, like a top that is leaning to one side. People living at the equator travel from west to east at a speed of 1670 km per hour. (The speed is slower for people living near the poles). Since everything around us is moving in the same way, we do not usually notice our high speed journey. The most obvious way to tell is to watch the Sun, Moon and stars as they appear to move across the sky.

The Solar System and its planets