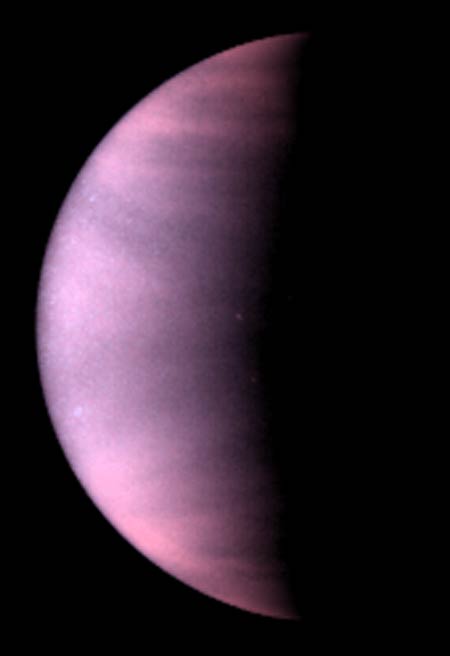 Venus is the second planet from the Sun, so it is always fairly close to the Sun in the sky. It appears as a brilliant morning or evening “star” – the brightest object in the night sky apart from the Moon. In a telescope, it can be seen to go through phases, just like the Moon.

Venus is so bright because it is covered by clouds that reflect much of the incoming sunlight. The yellowish clouds are made of sulphur and sulphuric acid.

In some ways, Venus is Earth’s twin. It is about the same size and made of the same rocky materials. It also comes closer to us than any other planet. However, it is blanketed with a thick atmosphere of carbon dioxide – the gas that we breathe out. This atmosphere is so dense that walking through would be like wading through water.

The carbon dioxide traps most of the heat from the Sun. The cloud layers also act as a blanket. The result is a “runaway greenhouse effect” that has caused the planet’s temperature to soar to 465°C, hot enough to melt lead. This means that Venus is even hotter than Mercury.

Without special protection, a visitor to Venus would die instantly – crushed by the immense air pressure, suffocated by the atmosphere, burned to a crisp by the scorching heat, and dissolved by the acid.

The surface of Venus has been mapped by radar. The maps show thousands of volcanoes and impact craters. There are two main upland areas, with a mountain range taller than Mt. Everest.

Dozens of spacecraft have visited Venus, but many mysteries remain. ESA’s Venus Express has been in near-polar orbit around the planet since it arrived in April 2006. Most of its instruments have been studying the dense atmosphere and rapidly moving clouds, or investigating how the Sun affects the planet. However, its infrared sensor has also been able to map some of the surface and show that active volcanoes may exist on Earth’s neighbour.