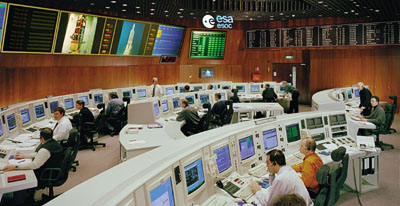 There is no garage in space. Once a spacecraft has left planet Earth, everyone hopes that all of its onboard systems will work properly. During the first few orbits, the job of ESOC, ESA's European Space Operations Centre, is to check that the spacecraft is in the correct orbit and that its main systems – communications, power, etc. – are operating.

If the spacecraft relies on solar power, one of the first tasks is to unfold the 'wings' so that they can gather sunlight.

Once the spacecraft has been successfully checked out, the engineers begin to switch on the instruments, one by one. This is called 'commissioning'.

The first pictures or measurements show whether the instruments are working as expected. If not, they are adjusted until the results improve. ESOC also checks that instruments do not interfere with others nearby.

Teams of scientists and engineers had to follow a detailed plan to check and monitor each satellite and its instruments. More than three months passed before the spacecraft were ready to start their mission to study the Sun-Earth connection.