The shooting gallery in space 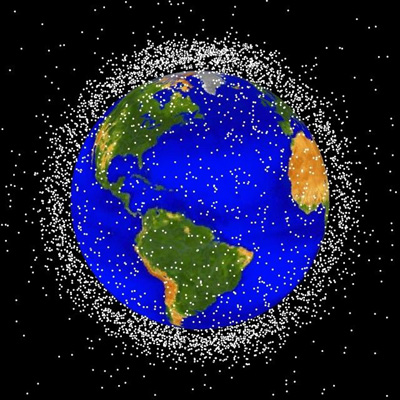 In March 2002, the Hubble Space Telescope’s solar arrays were brought back to Earth. After eight years in space, the ESA-supplied panels were peppered with impact craters up to 8 mm across.

The craters were created by fast-moving fragments of space debris. Travelling faster than a bullet, even a flake of paint can seriously damage a spacecraft. Some 10 000 pieces of debris were being tracked at the end of 2003. They included dead spacecraft, old rocket stages and a few tools lost during spacewalks.

Many more objects are too small to be recorded. There may be half a million objects 1-10 cm across – but no one knows the exact figure. ESA is tackling the debris problem in various ways. The Columbus lab on the International Space Station will be protected by special shielding.

ESA scientists in Germany and the Netherlands keep a catalogue of all known Earth-orbiting objects. They use this data to study space debris and provide advance warning of possible collisions.

Information on orbital debris is provided by a radar scanner in Germany and by an ESA telescope in Tenerife, Spain. ESA is also seeking international agreements to reduce space debris and boost spaceflight safety.