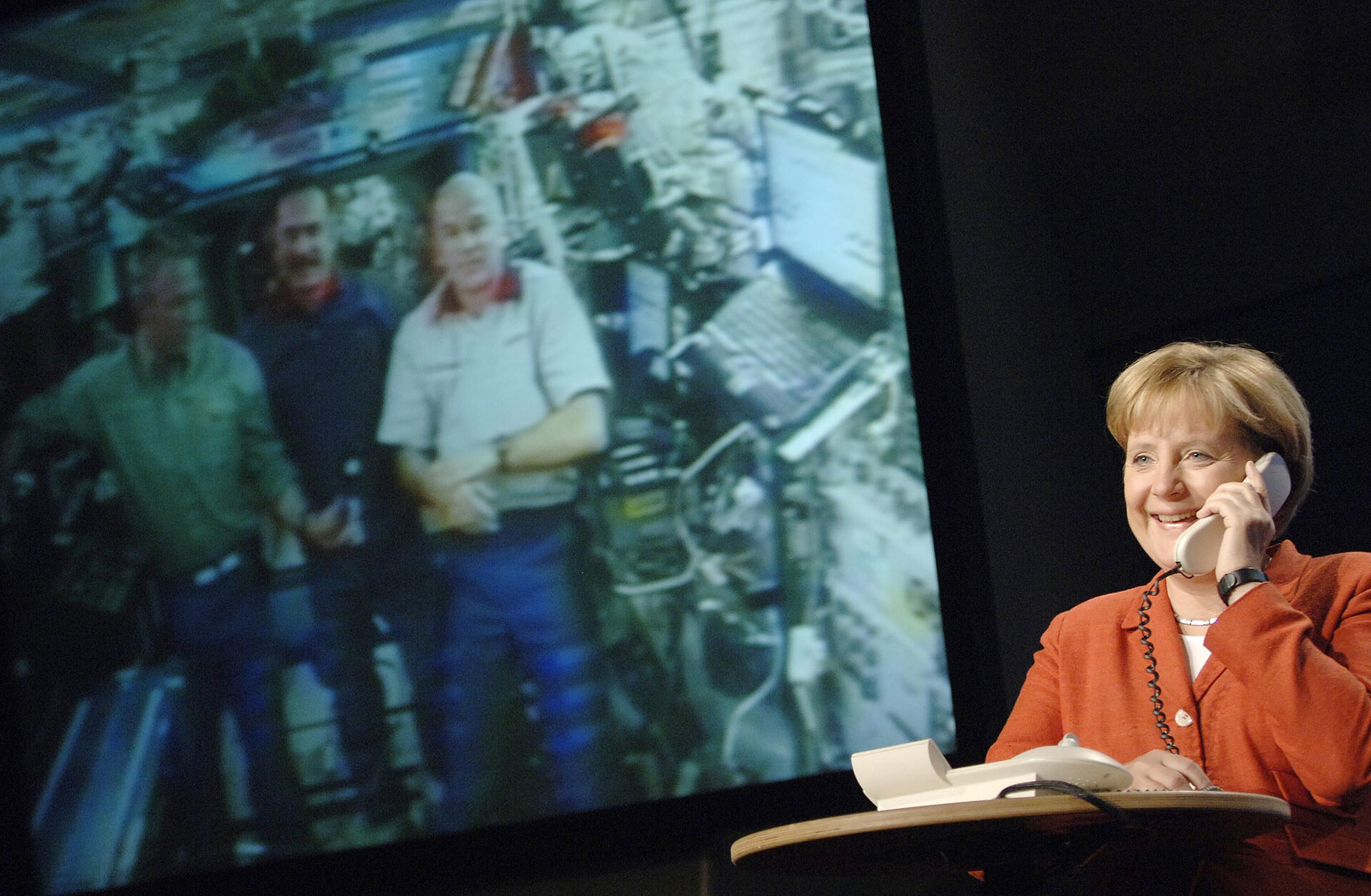 During this first "space-to-Earth" discussion between Mrs. Merkel and Reiter, the German head of government asked about Reiter's scientific programme while on board the ISS and his reaction to sleeping under zero gravity. She also took the opportunity to wish the three ISS crew members good luck in English, German and Russian.

Prime Minister Roland Koch of Germany's Hessen region, host region of the ESOC facility, and ESA Director General Jean-Jacques Dordain also participated in the call, which began at 12:30 CEST and lasted about 20 minutes.

"Space exerts not only a great fascination but also provides via scientific experiments great value, in particular for research in the health and medical sector," said Chancellor Merkel.

She added that, "This visit to ESOC has demonstrated again that ambitious space programmes cannot be done by one country alone; international cooperation is of the utmost importance. Therefore, Germany will remain a constant and reliable partner in the European space programme."

Prior to today's in-flight call, Chancellor Merkel and Prime Minister Koch were guided on a tour of the ESOC operations centre by Gaele Winters, ESA Director of Operations and Head of ESOC. The visitors were shown dedicated control rooms and other site facilities from which 54 European satellites have been successfully operated.

"It is a great honour and a pleasure to welcome Chancellor Angela Merkel and Hessen Prime Minister Roland Koch to ESOC for this in-flight call. Their visit demonstrates deep support for Thomas Reiter's ISS mission as a key element of Europe's human spaceflight programme, and is particularly significant for ESA's operations centre hosted in Germany," ESA Director General Dordain said.

The in-flight call came from ESOC in Darmstadt, located near Frankfurt, Reiter's birthplace. The astronaut was therefore keen to discuss the scientific objectives of his 6-month Astrolab mission with Chancellor Merkel and the prime minister of his home region. Chancellor Merkel holds a PhD in physics and is strongly interested in innovation, research and technology.

Their visit demonstrates deep support for Reiter's ISS mission and is particularly significant for ESA's operations centre hosted in Germany.

Reiter's Astrolab mission is the first long-duration mission by an ESA astronaut on the ISS and the science programme includes European experiments in biology, materials science and astrophysics. As of today's in-flight call, he will have just started his second week in space.

In addition to the science programme, Reiter's activities on board the ISS include regular crew duties and functions as well as an extra-vehicular activity (EVA), or spacewalk, currently scheduled for 3 August.

The Astrolab mission will enable Europe to gain experience and know-how in the operation of long-duration spaceflights in preparation for the addition of Europe's Columbus laboratory to the ISS in the second half of 2007.

ESOC mission controllers are supported by a team of specialists working in flight dynamics, software and communications. ESOC operates satellites during their entire mission lifetime, carries out routine and corrective manoeuvres and conducts payload operations. The centre employs some 250 permanent staff and 550 contractors.