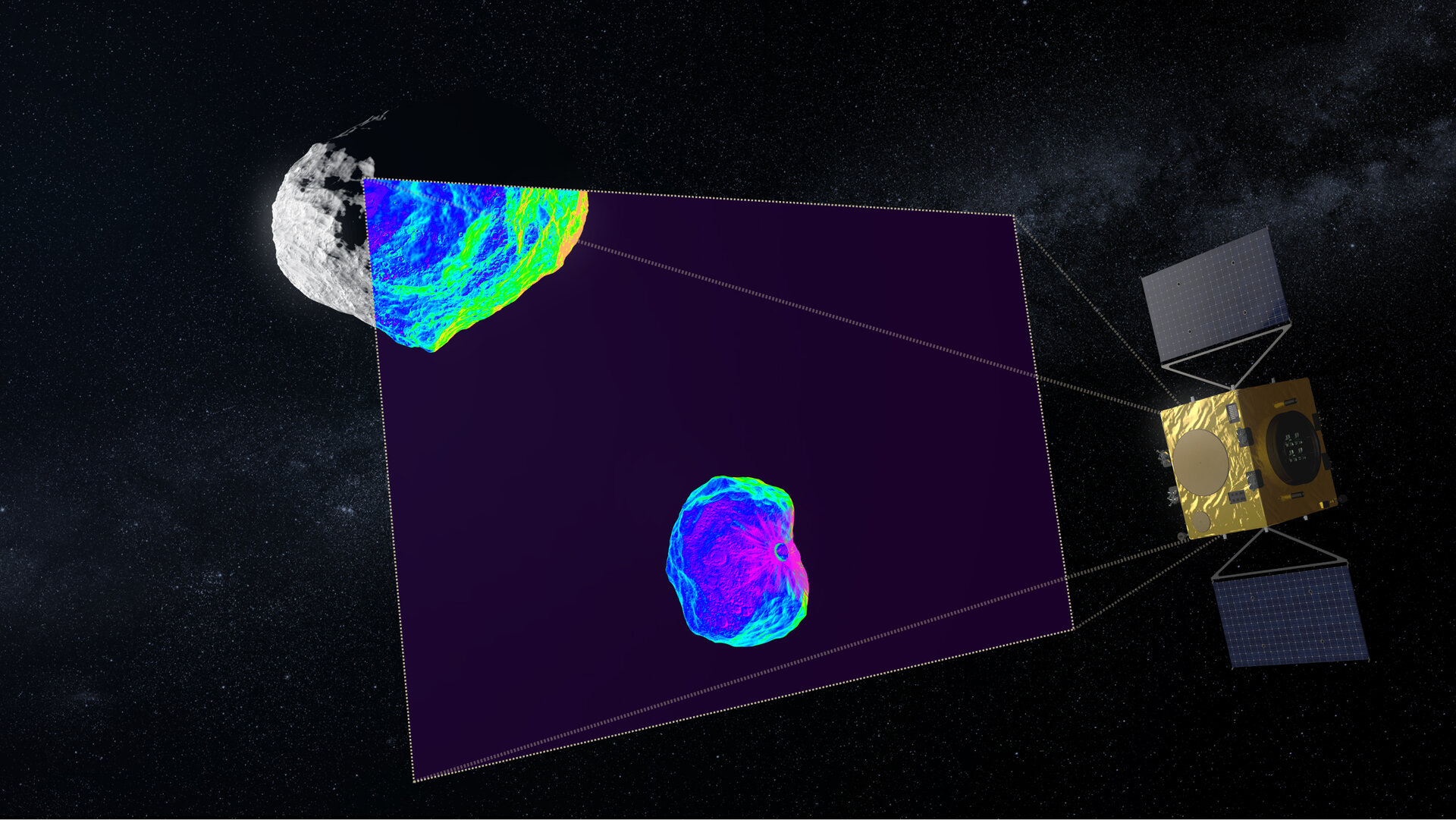 Today ESA awarded a €129.4 million contract covering the detailed design, manufacturing and testing of Hera, the Agency’s first mission for planetary defence. This ambitious mission will be Europe’s contribution to an international asteroid deflection effort, set to perform sustained exploration of a double asteroid system.

Hera – named after the Greek goddess of marriage – will be, along with NASA's Double Asteroid Redirect Test (DART) spacecraft, humankind’s first probe to rendezvous with a binary asteroid system, a little understood class making up around 15% of all known asteroids.

The contract was signed today by Franco Ongaro, ESA Director of Technology, Engineering and Quality, and Marco Fuchs, CEO of Germany space company OHB, prime contractor of the Hera consortium. The signing took place at ESA’s ESOC centre in Germany, which will serve as mission control for the 2024-launched Hera.

Hera is the European contribution to an international planetary defence collaboration among European and US scientists called the Asteroid Impact & Deflection Assessment, AIDA. The DART spacecraft – due for launch in July 2021 – will first perform a kinetic impact on the smaller of the two bodies. Hera will follow-up with a detailed post-impact survey to turn this grand-scale experiment into a well-understood and repeatable asteroid deflection technique.

While doing so, the desk-sized Hera will also demonstrate multiple novel technologies, such as autonomous navigation around the asteroid – like modern driverless cars on Earth – while gathering crucial scientific data, to help scientists and future mission planners better understand asteroid compositions and structures.

Due to launch in October 2024, Hera will travel to a binary asteroid system – the Didymos pair of near-Earth asteroids. The 780 m-diameter mountain-sized main body is orbited by a 160 m moon, formally christened 'Dimorphos' in June 2020, about the same size as the Great Pyramid of Giza.

DART’s kinetic impact into Dimorphos in September 2022 is expected to alter its orbit around Didymos as well as create a substantial crater. This moonlet asteroid will become unique, as the first celestial body to have its orbital and physical characteristics intentionally altered by human intervention. Hera will arrive at the Didymos system at the end of 2026, to perform at least six months of close-up study.

Hera’s mission control will be based at ESA’s ESOC centre in Darmstadt, Germany, also the home of ESA’s new Space Safety and Security programme, of which Hera is a part.

The contract has been awarded to a consortium led by prime contractor OHB System AG in Bremen.

Belgium is developing Hera’s on-board computer and software, the brain of the spacecraft, plus its power conditioning and distribution unit - the heart of its electrical subsystem. It is also contributing to Hera’s Japanese-developed thermal imager and CubeSats operations center at ESA/ESEC.

Luxembourg is leading the radar-hosting ‘Juventas’ CubeSat and the inter-satellite communication system allowing the two Hera CubeSats to communicate with Earth through an innovative network using Hera as data relay.

Portugal and Romania are developing the laser altimeter which will provide crucial information for the autonomous navigation functions. In addition, Romania is developing the image processing unit, harness and the electrical test equipment (while also contributing to its GNC development).

The Czech Republic is responsible for the full satellite structure, payload software (to command the instruments), independent software validation and ground support equipment for pre-flight satellite testing. It is also providing components for Juventas’ low-frequency radar and data processing software on the second CubeSat.

And Spain is developing Hera’s advanced guidance, navigation and control system as well as the deep-space communication system. It is also providing the Juventas gravimeter instrument.