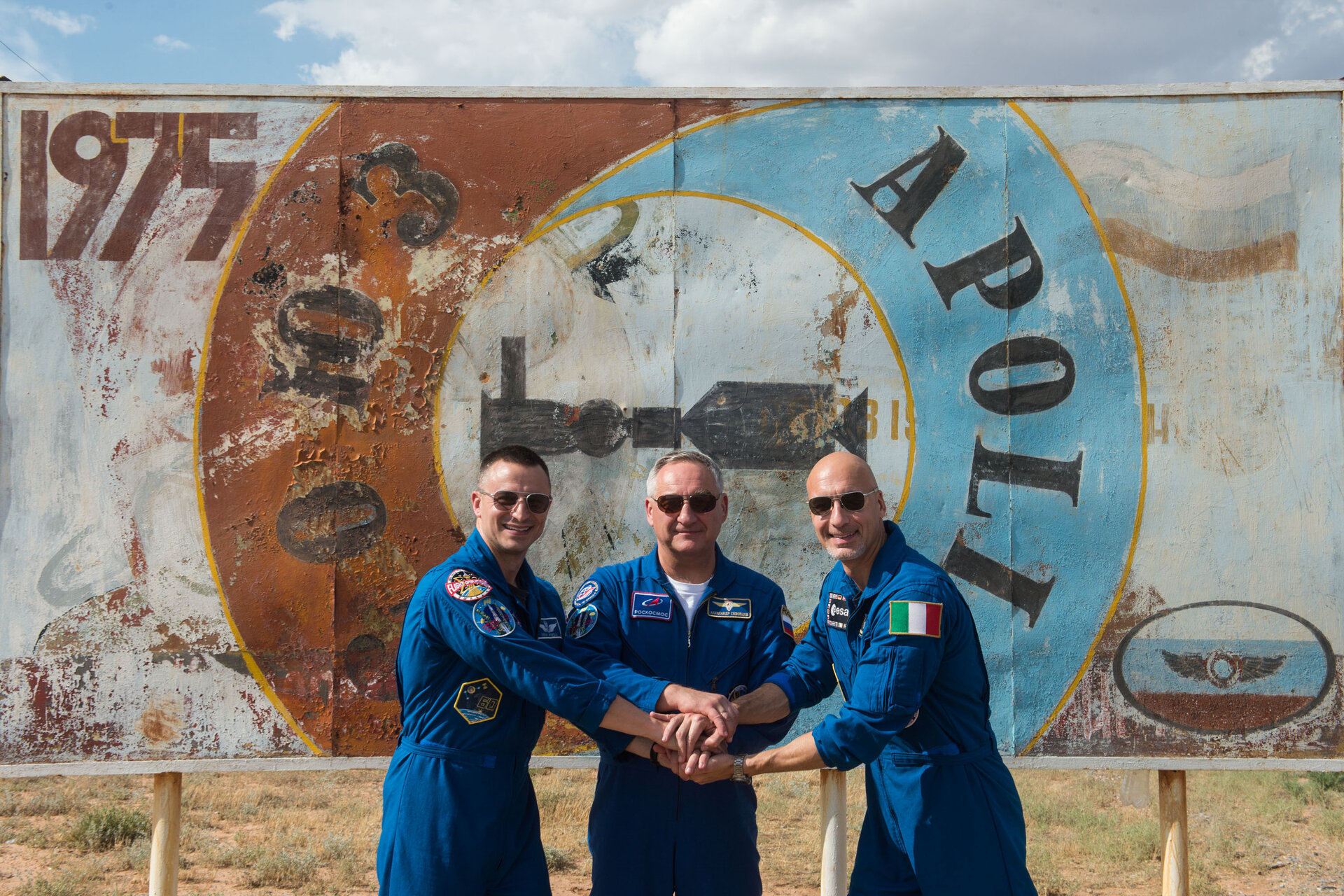 The next astronauts to join the International Space Station are on their marks for their launch to Earth’s orbit on 20 July, a date that also commemorates the 50th anniversary of the Apollo 11 Moon landing.

The run-up to launch includes medical checkups and reviewing plans for the six-hour flight on the Soyuz MS-13 spacecraft to the Space Station. All Soyuz astronauts go through a number of traditions leading to the final countdown. Luca and crewmates took part in the flag raising ceremony, an event that kicks off the official preparations for launch.

The astronauts also visited their Soyuz capsule. There will be precious scientific cargo travelling alongside Luca in the cramped Soyuz orbital module. To gain a clearer picture of the astronauts’ radiation environment on the Station, ESA is launching the DOSIS 3D dosimeters.

Hard drives for the Plasma Kristall experiment that models atomic interactions in orbit are part of the European cargo package.

Luca, Alexander and Andrew and part of Expeditions 60 and 61 to the Space Station. Their patch for Expedition 60 is inspired in the Apollo 11 mission patch. A prominent eagle, no crew names and the Moon are featured to commemorate the first manned mission to land on the lunar surface.

Meanwhile in space, the International Space Station adjusted its orbit to create the right conditions to welcome Luca’s Soyuz and the cargo vehicle and later this month the Progress MS-12 supply spacecraft.

The Russian Zvezda module fired its engines for 34 seconds in the middle of the night on 2 July, raising the orbit to 436 km above Earth.

The science is ready for the start of Luca Parmitano’s second mission to the Space Station – Beyond.

The trio already in space, Russian cosmonaut Alexei Ovchinin and NASA astronauts Christina Koch and Nick Hague, continue to orbit our planet and are running experiments.

Nick is keeping algae growing on the Space Station, feeding Chlorella vulgaris with nutrients and removing excess algae. Nick also took a sample of the algae and stored it in the Space Station’s –80°C freezer for analysis later on Earth.

The PhotoBioreactor experiment is looking at how we can harness the power of organisms to produce oxygen and food from water and carbon dioxide. Producing oxygen and biomass will help exploration missions reduce the amount of supplies that must be brought from Earth.

While the astronauts sleep

While the astronauts sleep, Space Station science is ongoing. These include Electromagnetic Levitator operations that benefit from a lack of activity that could disturb the still conditions required to conduct a series of melting cycles with alloys.

The levitator is a furnace that heats metals up to 2100°C and then cools them rapidly. For scientists, observing liquid metals cooling in weightlessness removes unnecessary complexity to reveal the core processes of physics. The Electromagnetic Levitator takes things a step further and suspends the metals in mid-air as they melt and solidify. Last week the latest scientific data was downlinked to ground.