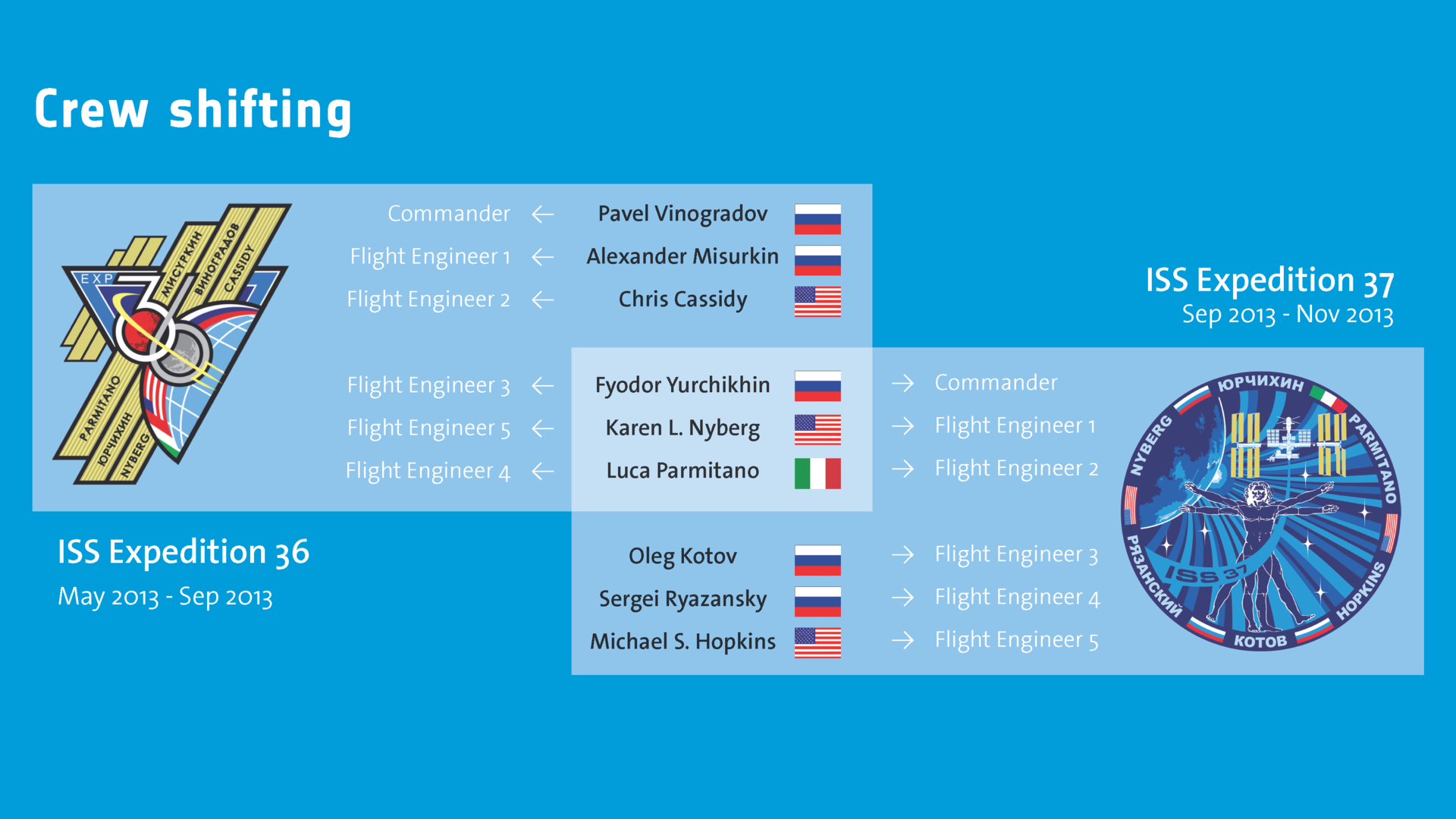 Fyodor Yurchikhin is a highly experienced cosmonaut. 54 years-old when Volare was launched he flew to the International Space Station three times: once on the Space Shuttle (STS-112) and twice on the Soyuz for long-duration missions (Expeditions 15 and 24/25), performing five spacewalks in total.

Fyodor decided to be a cosmonaut when he was a child, and worked on building an impressive career. A mechanical engineer specialising in aeronautics, he worked in Russia’s mission control centre before becoming a cosmonaut in his forties.

For Fyodor, the Station demonstrates that “we are part of a tremendous team of people from different countries who work well together on the same programme.”

Karen Nyberg was the 50th woman to travel in space, in 2008. 43 years-old when Volare launched, she wanted to be an astronaut from a young age and became known as ‘the rocket scientist’ in high school, where a friend wrote in her yearbook “Have fun on the Moon.”

Karen flew on NASA’s STS-124 Space Shuttle mission, the second of three flights to install the Japanese Kibo laboratory. She led the robotic arm operations to attach the module to the Station, becoming the first astronaut to operate the Shuttle’s, the Station’s and the Japanese robotic arms.

Married to astronaut Douglas Hurley, Karen has a doctorate in mechanical engineering. Her research includes human thermoregulation and experimental metabolic testing specifically related to controlling thermal neutrality in space suits. She likes backpacking and spending time with her dogs.

Pavel Vinogradov is one of the top 25 astronauts in terms of total time logged in space. Aged 59 when Volare launched, he spent half his life working in the space sector, working on software development for recoverable vehicles to spacecraft launch preparations.

Pavel flew in 1997 to the Mir space station. During that mission, he performed five spacewalks and logged nearly 200 days in space. The cosmonaut flew a second time in 2006 to the International Space Station, serving as the Expedition 13 crew commander.

Aleksander Misurkin was a major in the Russian air force before he was selected in 2006 to become a cosmonaut. Among his duties and accomplishments, he is a first-class instructor-pilot and has logged 1 600 hours of flight time in jet trainer-aircraft for the Russian air force.

Aleksander has undergone extreme survival training courses, both in the desert and at sea. In his spare time, the cosmonaut enjoys alpine skiing and karting.

Christopher Cassidy had the honour of being the 500th person to go to space. He started his career as a member of the US Navy SEALs. At 43 years-old when he was launched, he still likes to refer to his fellow astronauts as ’shipmates’.

Christopher flew on NASA’s Space Shuttle Endeavour on a 15-day mission to the International Space Station (STS-127), spending more than 18 hours in spacewalks to help install and complete the construction of Kibo, the Japanese Experiment Module.

He has also worked as a Capsule Communicator in mission control for more than two years, supporting communications between astronauts on the Space Station and the ground teams.

Oleg Kotov is a Colonel in the Russian air force and a specialist in space medicine. During his early career as a physician, he worked on altitude physiology and how spaceflight affects the human body.

On his third spaceflight Oleg was 47 year's old and had two long-duration missions on the Space Station under his belt. He was flight engineer for Expedition 15 in 2007, and commander on Expedition 23 in 2010. During his last mission, a Progress vehicle failed to adopt the proper attitude while it was approaching the Station, so Oleg took manual control and guided the spacecraft to dock with the Station, a first for a Progress docking.

This Expedition was Sergey’s first flight into orbit, but space is part of his roots. He joined the cosmonaut team because of a family tradition − his grandfather was a rocket engineer involved in Yuri Gagarin’s historic first mission to space.
After graduating as a biochemist, he began working at the Institute of Biomedical Problems in Moscow. There, as researcher and test cosmonaut, he participated in a 105-day mission isolation study in 2009. Sergey, 38 years-old at the time of launch, hopes to contribute to future human missions to Mars.

Inspired by the early successes of the Space Shuttle programme, Michael Hopkins pursued his dream of flying to space since high school. He graduated in aerospace engineering, gained his private pilot’s licence and served as a Lieutenant Colonel in the US Air Force.

He lived in Parma, Italy, for nearly two years to study political science. Michael was selected as a special assistant to the Vice Chairman of the Joint Chiefs of Staff at the Pentagon. He was selected in July 2009 to join NASA’s 20th astronaut class, the first of the post-Shuttle generation. He was 44 years old when launched on his first spaceflight.