The ESA-JAXA BepiColombo mission has completed the first of two Venus flybys needed to set it on course with the Solar System’s innermost planet, Mercury.

The first flyby – of Earth – took place 10 April this year, returning poignant images of our home planet as the world faced lockdown due to the COVID-19 pandemic.

“For the Venus flyby we conducted the large majority of our preparations over the last three months via teleworking, with only the minimum personnel required onsite during the flyby to ensure the safe operation of the spacecraft,” says Elsa Montagnon, ESA’s BepiColombo Spacecraft Operations Manager.

The on-site team at ESA’s mission control centre in Darmstadt, Germany, comprised four members of the flight control team split into two groups over a period of 36 hours, together with a ground station manager, and two team members joining around closest approach to manage the images as they were downloaded from the spacecraft.

“The flyby itself was very successful,” confirms Elsa. “The only difference to normal cruise phase operations is that near to Venus we have to temporarily close the shutter of any of the star trackers that are expected to be blinded by the planet, similar to closing your eyes to avoid looking at the Sun.”

Two of the three monitoring cameras onboard the Mercury Transfer Module were activated during dedicated imaging slots from 20 hours before closest approach through to 15 minutes afterwards. From afar, Venus is seen as a small disc in the camera’s field of view, close to the spacecraft body. During the closest approach phase the planet dominates the view, 'rising' behind the magnetometer boom of the Mercury Planetary Orbiter.

Science in the making

Seven of the eleven science instruments onboard the European Mercury Planetary Orbiter, plus its radiation monitor, and three of five onboard the Japanese Mercury Magnetospheric Orbiter were active during the flyby. While the suite of sensors are designed to study the rocky, atmosphere-free environment at Mercury, the flyby offered a unique opportunity to collect valuable science data at Venus.

“Following the successful Earth flyby where our instruments worked even better than expected, we are looking forward to see what will come out of the Venus flyby,” says Johannes Benkhoff, ESA’s BepiColombo Project Scientist.

“We’ll have to be patient while our Venus specialists look carefully into the data, but we hope to be able to provide some atmosphere temperature and density profiles, information about the chemical composition and cloud cover, and on the magnetic environment interaction between the Sun and Venus. But we rather anticipate more results next year than now, given the closer flyby distance, so watch this space!”

The 2021 flyby, planned for 10 August, will see the spacecraft pass within just 550 km of the planet’s surface.

“Akatsuki is currently the only spacecraft in orbit around Venus and because of its elliptical orbit it was actually 30 times further away from the planet than BepiColombo during the flyby, meaning we can compare close observations of BepiColombo with Akatsuki’s global-scale view,” says Go Murakami, JAXA’s BepiColombo Project Scientist.

“A large campaign of coordinated observations are ongoing, involving professional and amateur astronomers alike, that will build a three-dimensional picture of what’s happening over time in Venus’ atmosphere, something that cannot be achieved by one spacecraft or one telescope alone," says Valeria Mangano, of the National Institute for Astrophysics in Italy, and chair of the Venus flyby working group. 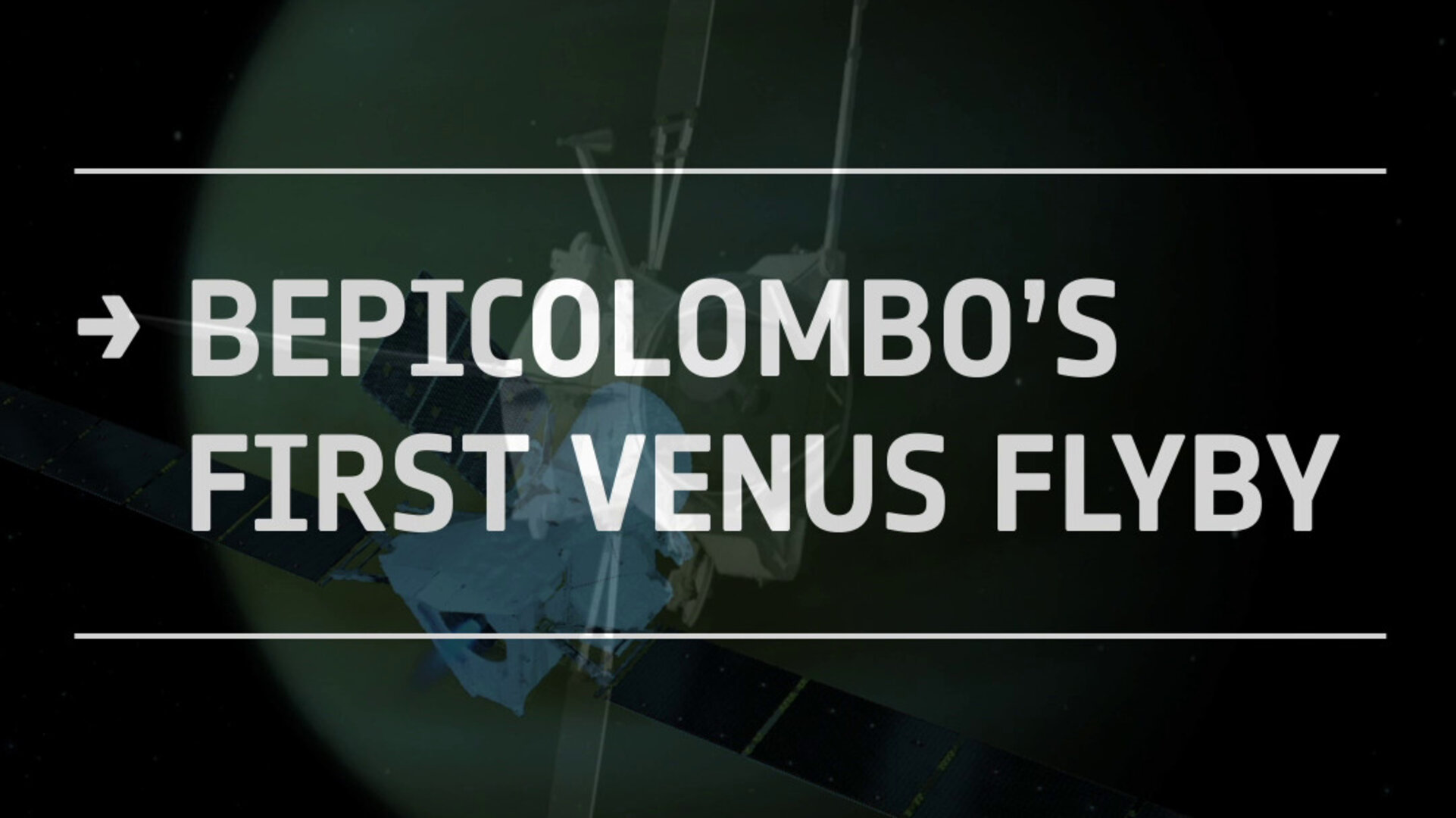 While the science teams are busy diving into the new flyby data, the operations teams will assess the performance of the Venus flyby and make a routine trajectory correction of the spacecraft on 22 October. The next dedicated solar electric propulsion arc is planned for May 2021.

BepiColombo will also make its first Mercury flyby next year, in October, at a distance of just 200 km, providing the first tantalizing taste of what will follow once the mission’s two science orbiters have arrived in their dedicated orbits around the planet. There they will study Mercury’s mysteries, addressing numerous open questions in planetary science, such as: where in the Solar System did Mercury form? What is the nature of the ice in Mercury’s shadowed craters? Is the planet still geologically active? How can such a small planet still have a magnetic field?

“With each flyby completed we get a step closer to answering some of these perplexing questions about mysterious planet Mercury,” adds Johannes. “Learning more about Mercury will shed light on the history of the entire Solar System, helping us to better understand our own place in space.”

"While gravity assists have a practical function to set us on course for Mercury, it is wonderful to have these brief opportunities to observe Venus as we fly through the Solar System," says Simon Plum, ESA's Head of Mission Operations.
"Thanks to the teams who have been working hard behind the scenes over the last months to make this flyby a success. While we work with incredibly far distances and a tremendous amount of space as we navigate the Solar System, we are again dealing with special operations under pandemic situation, where space between our people matter and the safety of our colleagues remain the number one priority.”

For updates on the upcoming operations activities and science data analysis follow the mission on Twitter via: @ESA_Bepi, @ESA_MTM and @BepiColombo

Update 19 October: the final report on the navigation of the flyby confirms that the closest approach took place at 03:58:31 UTC at a distance of 16773.6km from the centre of Venus (10721.6 km from the surface of the planet).

BepiColombo is Europe's first mission to Mercury. Launched on 20 October 2018, it is on a seven-year journey to the smallest and least explored terrestrial planet in our Solar System. The mission is a joint endeavour between ESA and the Japan Aerospace Exploration Agency (JAXA), carried out under ESA leadership.

BepiColombo comprises two scientific orbiters: ESA’s Mercury Planetary Orbiter (MPO) and JAXA’s Mercury Magnetospheric Orbiter (Mio). The European Mercury Transfer Module (MTM) carries the orbiters to Mercury. After arrival at Mercury in late 2025, the spacecraft will separate and the two orbiters will manoeuvre to their dedicated polar orbits around the planet. Starting science operations in early 2026, both orbiters will gather data during a one-year nominal mission, with a possible one-year extension.

The mission is named after the Italian mathematician and engineer Giuseppe (Bepi) Colombo (1920–84).