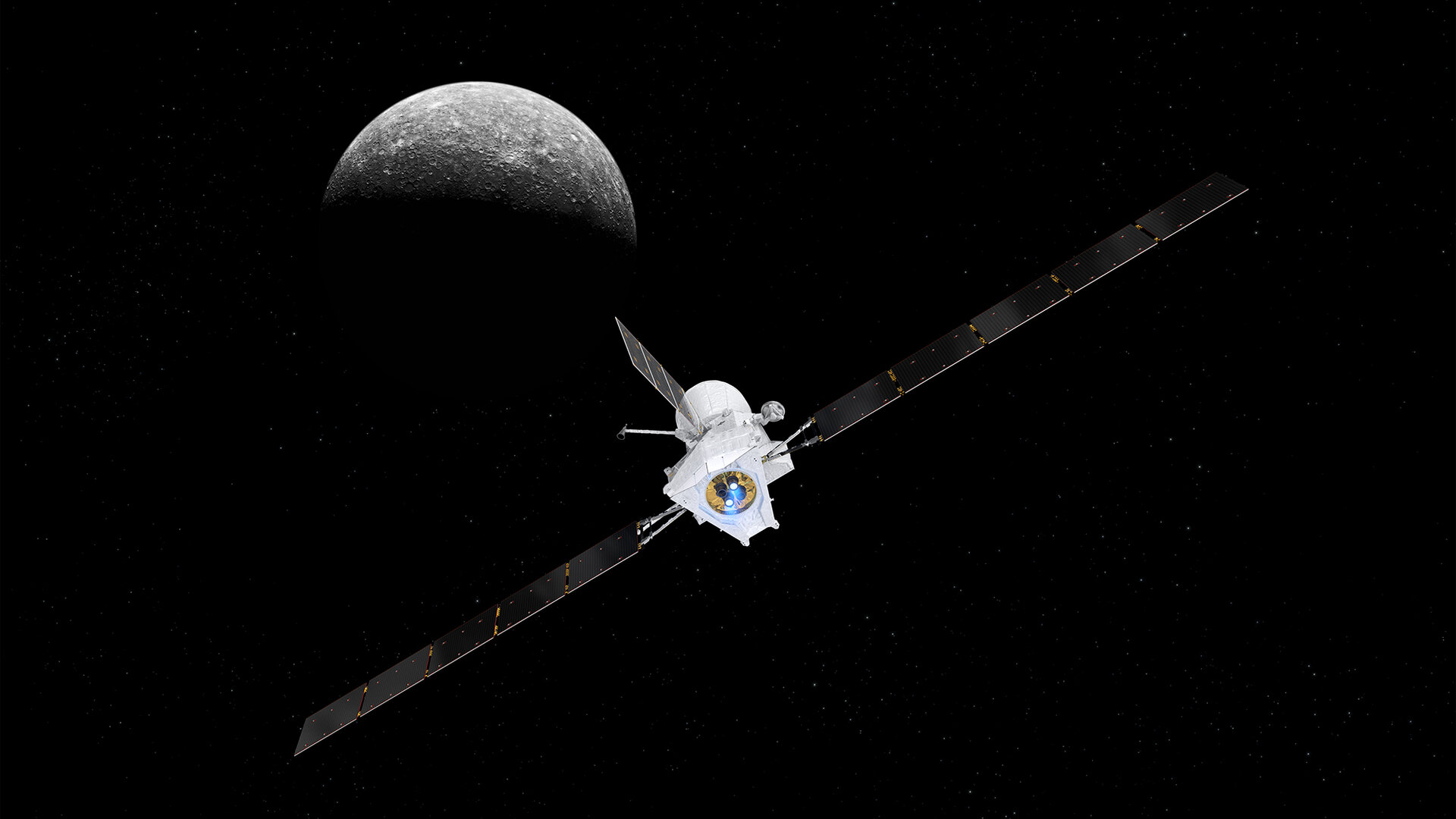 Earth is on average ten times closer to Mercury than Jupiter, but missions to both planets can take a similar amount of time to reach their science orbits. Why is that?

In the 1970s, NASA’s Mariner 10 spacecraft took just 147 days to reach the innermost planet of the Solar System. But more recent missions, NASA’s MESSENGER in the 2000s and the European-Japanese BepiColombo, launched in 2018, need years to arrive at Mercury.

The reason is that they are not making the same journey. While Mariner 10 made three flybys of Mercury while in orbit around the Sun, providing our first up close view of its surface, MESSENGER and BepiColombo were designed to enter orbit around the planet and conduct more detailed scientific investigations over a longer period of time. To enter orbit around Mercury, the spacecraft need to reach the planet travelling slowly enough relative to its velocity to be captured by its gravity. They need to slow down from their original speed, and slowing down in the vacuum of  space is actually quite complicated.

If a spacecraft sent from Earth aims for planets of the outer Solar System, such as Jupiter or Saturn, it needs to increase its distance from the Sun. When we send a spacecraft to Mercury, it has to get much closer to the Sun than the Earth is.

But the laws of physics dictate that the spacecraft’s total orbital energy will stay the same unless we find a way to shed some. Reducing the part of orbital energy related to the distance from the Sun automatically increases the part related to speed by the same amount. Consequently, as the spacecraft gets closer to the Sun, it begins to speed up like a car driving downhill.

Speeding up is not necessarily a bad thing. According to Kepler’s third law of planetary motion, Mercury whizzes around the Sun on its tight orbit much quicker than Earth. So, our spacecraft heading to Mercury will have to gain some speed to catch up with the tiny planet.

Unfortunately, without shedding some orbital energy, the spacecraft will pick up too much speed and reach Mercury moving far too quickly to be captured by its gravity and will fly right past.

Putting on the brakes

The energy our spacecraft needs to shed is on a completely different scale to using brakes to slow down while driving downhill on Earth. Arriving at Mercury travelling slowly enough to be captured by its gravity is a bit like falling down a cliff millions of kilometres high and landing softly on a moving target half way down!

To burn off all the necessary orbital energy using only thrusters, our spacecraft would need such a huge amount of fuel, and extra material to hold it, that it would become far too heavy to launch into Earth orbit even with the most powerful rocket.

Instead, the spacecraft can use the powerful gravitational pull of other planets it approaches on the way to its destination to offload the excess energy and alter the path of its own orbit. Depending on how the spacecraft approaches the moving planet, it can either increase or decrease its speed relative to the Sun.

This allows us to give or take some orbital energy to or from the planet and change the spacecraft’s speed without using fuel .

This manoeuvre, known as a gravity assist manoeuvre, flyby, swing-by or gravitational slingshot, allows us to explore a wide range of objects across the Solar System on a tight fuel budget. If we want to visit the distant outer planets and minor bodies, we can take some extra energy from Mars or Jupiter. If we want to visit Mercury, we can give some away to the inner planets as we pass by.

Lining up the shots

Approaching a planet in the right way to perfectly alter the spacecraft’s orbit requires a lot of maths and careful planning. What’s more, to lose all the energy necessary to enter orbit around Mercury we have to do multiple flybys.

Like a billiards player carefully lining up their shot to make sure the cue ball ends up in a good position for the next one, mission planners have to design a route for their spacecraft that sees it leave each flyby on the correct trajectory to be in the right place at the right time for the next one.

Even using some on-board fuel to adjust the spacecraft’s orbit between each flyby, it still takes years to offload the energy as the cosmic billiard balls travel the vast distances through space between encounters.

As a result, using flybys to help a spacecraft arrive at Mercury slowly enough to enter orbit is great for reducing fuel requirements, but makes reaching the small planet a very long journey.

This method for putting a spacecraft in orbit around Mercury, and solving the mathematics behind it, puzzled scientists and engineers for decades. Even today, there is still no perfect formula for finding the best path for a spacecraft to get to a planet using flybys. Calculating this path requires  expertise and patience on behalf of mission analysts.

NASA’s Mariner 2 spacecraft performed the first successful planetary flyby ever in 1962 at Venus. This encounter, however, wasn’t designed to alter the spacecraft’s trajectory but to gather data about the second closest planet to the Sun. The use of flybys as a manoeuvre to correct a spacecraft’s path en route to another planet would only start about a decade later.

In 1970, Italian mathematician and engineer Giuseppe ‘Bepi’ Colombo suggested that a flyby of Venus would enable NASA’s Mariner 10 spacecraft to swing past Mercury three times instead of the originally planned single encounter. An analytical study conducted by NASA’s Jet Propulsion Laboratory confirmed Colombo's idea. The mission went on to fly past Mercury three times while orbiting around the Sun and would achieve further encounters had it not run out of fuel. The manoeuvre at Venus enabled scientists to acquire twice as much scientific data about the then completely unexplored Mercury compared to original expectations.

A lot of what we know about Mercury today comes from Mariner 10’s encounters during 1974–75, which were inspired by Colombo's calculations.

MESSENGER and BepiColombo, named after the scientist, take Colombo’s ideas a step further. By passing Mercury multiple times, in addition to other flybys of the inner planets, the spacecraft shed enough energy to enter orbit around the planet, enabling scientific studies that would otherwise be impossible.