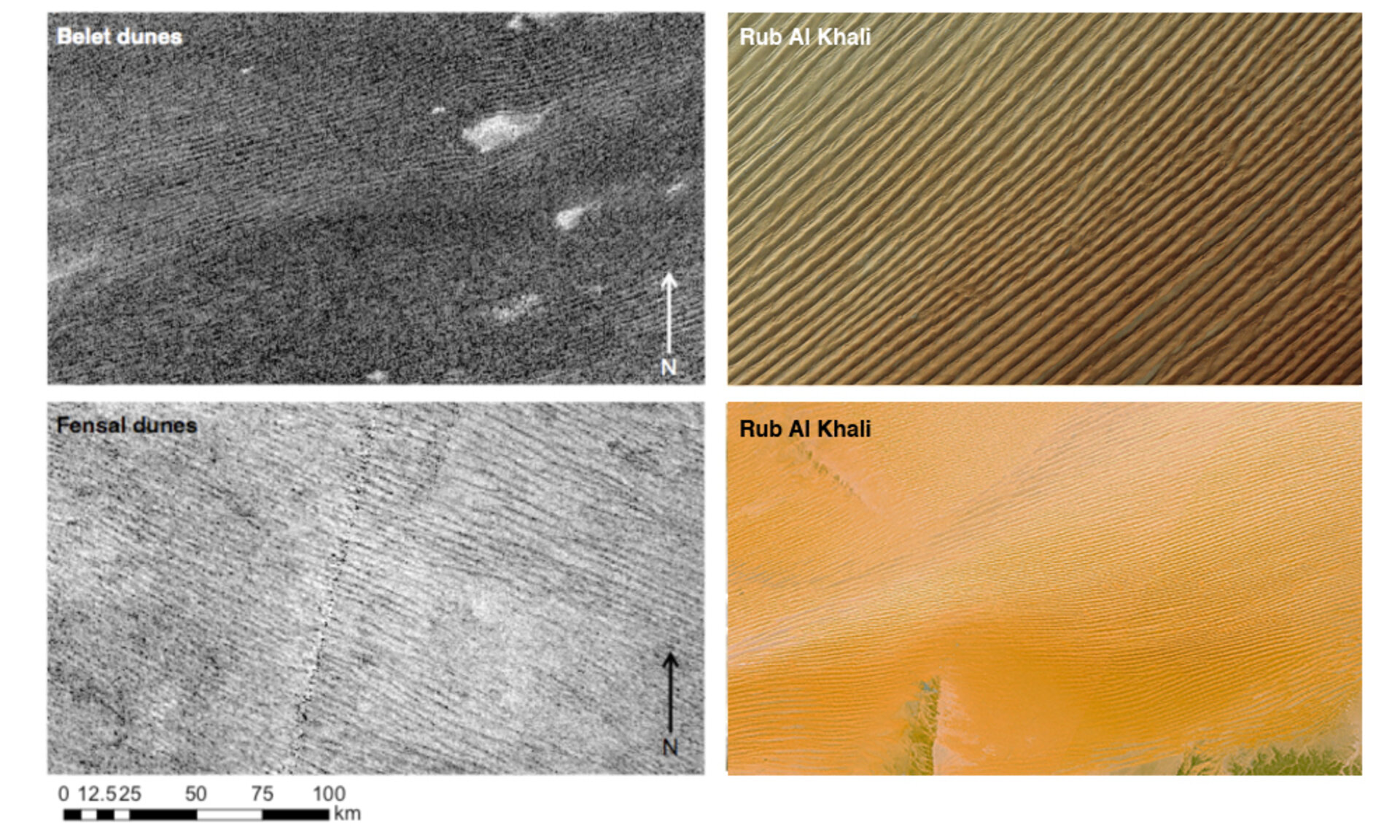 A new analysis of radar data from the international Cassini spacecraft has revealed regional variations amongst Titan's sand dunes. The result yields new clues to the giant moon's climatic and geological history.

Dune fields are common on Titan, the largest moon of Saturn, second only to the seemingly uniform plains that cover most of the surface.

They cover about 13% of Titan, stretching over 10 million sq km, roughly equivalent to the area of Canada. Thus they offer a large-scale insight into the moon's environment.

Though similar in shape to the linear sand dunes found in the deserts of Namibia or southern Arabia, Titan's dunes are gigantic by Earthly standards. They are on average 1–2 km wide, hundreds of kilometres long and around 100 m high.

However, their size and spacing vary across the surface, betraying the environment in which they have formed and evolved.

Another difference is that sand on Titan is not made of silicates as on Earth, but of solid hydrocarbons that precipitate out of the atmosphere. These then aggregate into millimetre-sized grains by a still unknown process.

Using radar data from the NASA–ESA–ASI Cassini spacecraft, Alice Le Gall, of LATMOS-UVSQ, Paris and NASA–JPL, California, and collaborators have discovered that the size of Titan's dunes is controlled by at least two factors: altitude and latitude.

The main dune fields on Titan are found in lowland areas. Dunes at higher elevations tend to be narrower and more widely separated, and the gaps between them appear brighter to Cassini's radar, indicating a thinner covering of sand.

This suggests that there is relatively little sand available at higher elevations to build dunes, while more is present in the lowlands.

In terms of latitude, the dunes on Titan are confined to its equatorial region, in a band between 30°S and 30°N.

However, they tend to become narrower and more widely spaced at northern latitudes. Dr Le Gall and colleagues think that this may be due to Saturn's elliptical orbit.

Titan orbits Saturn and so the moon's seasons are controlled by Saturn's path around the Sun. Because Saturn takes about 30 years to complete an orbit, each season on Titan lasts for just over seven years. The slightly elliptical nature of Saturn's orbit means that the southern hemisphere of the moon has shorter but more intense summers.

As a result, in southern regions, surface wetness due to ethane and methane vapour in the soil is reduced. The drier the sand grains, the more easily they can be transported by the winds to make dunes.

"As one goes to the north, the soil moisture probably increases, making the sand particles less mobile and, as a consequence, the development of dunes more difficult," says Dr Le Gall.

Backing up this hypothesis is the fact that Titan's lakes and seas of liquid ethane and methane are predominantly found in the northern hemisphere, suggesting again that the soil may be moister towards the north, again making it harder to transport sand grains by the wind.

"Understanding how the dunes form as well as explaining their shape, size and distribution on Titan's surface is of great importance to understanding Titan's climate and geology," says Nicolas Altobelli, ESA's Cassini–Huygens project scientist.

"As their material is made out of frozen atmospheric hydrocarbons, the dunes might provide us with important clues on the still puzzling methane/ethane cycle on Titan, comparable in many aspects with the water cycle on Earth."