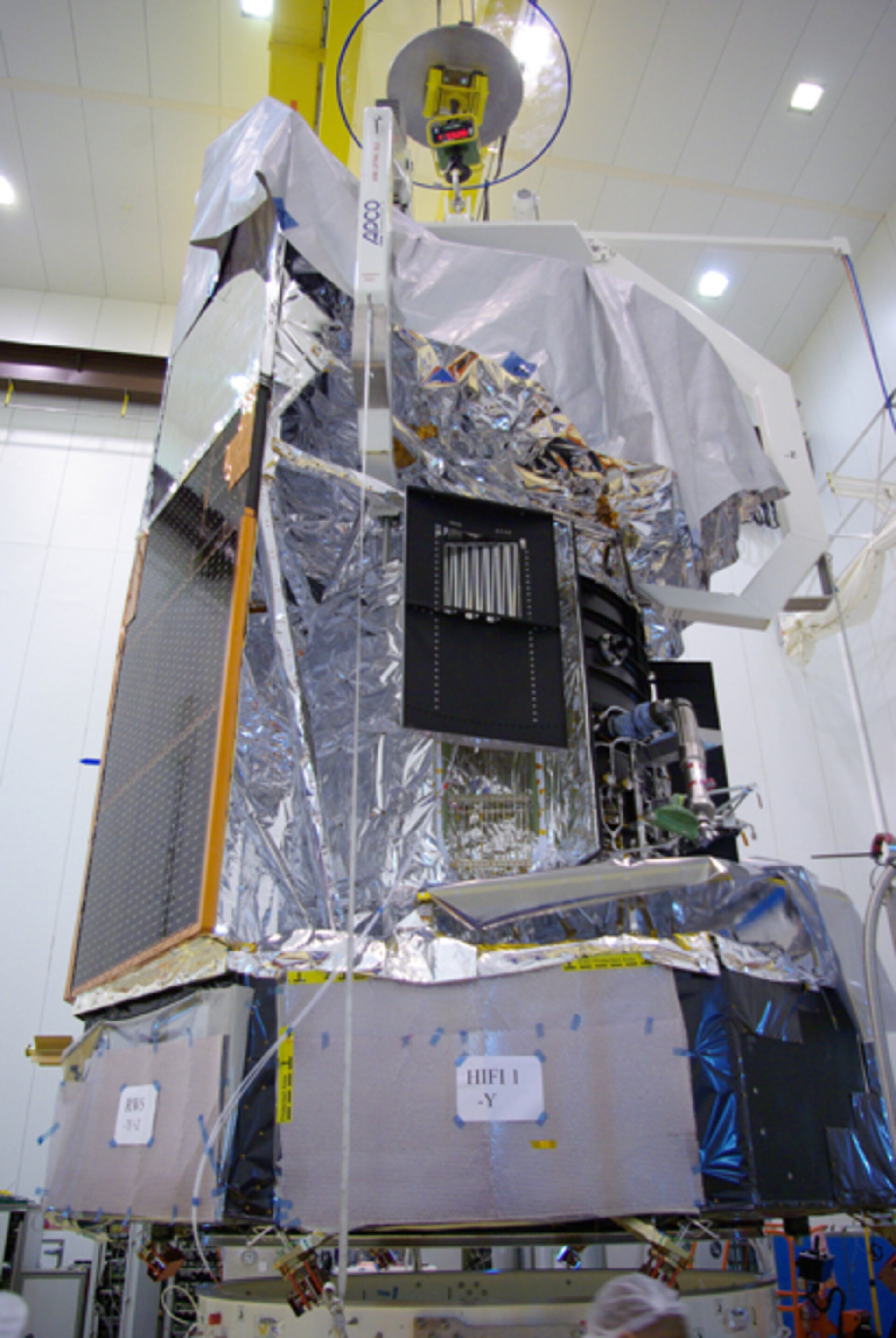 About two weeks ago, Herschel was weighed to record its dry mass before the satellite was fuelled with 256 kg of liquid hydrazine. After switching it on to confirm normal function, engineers integrated the fuelled satellite with the Ariane 5 adapter.

On 26 March, the satellite’s weight was measured with reference to calibrated masses for maximum accuracy. After this it was moved to another building on the launch site to begin fuelling operations.

Herschel will use its thrusters, powered by hydrazine, for any manoeuvres once in orbit. This is a volatile and toxic substance, commonly used as rocket fuel. This is why the critical fuelling operation required plenty of preparation, including safety training exercises for the fuelling team, and was executed with great care.

The operation was carried out from 10 to 11 April in a special room at the launch site. The personnel involved were dressed in Self-Contained Atmospheric Protective Ensemble, or ‘SCAPE suits’.

Before fuelling, the satellite’s two propellant tanks were pressurised to the end-of-life pressure with nitrogen and then the hydrazine was loaded. The tanks were filled with 128 kg of liquid hydrazine each. This amount of hydrazine is calculated to be enough for six years in orbit, and includes a safety margin.

Once fuelling was completed, engineers thoroughly decontaminated the equipment, ensuring that it was hydrazine-free, to 0.1 part per million.

After fuelling was completed, engineers switched Herschel on to ensure that the satellite worked normally. Herschel was then integrated with the Ariane 5 adapter on 11 April.

Herschel, ESA's cutting-edge space observatory, will carry the largest, most powerful infrared telescope ever flown in space. A pioneering mission to study the origin and evolution of stars and galaxies, it will help understand how the Universe came to be what it is today.

The Ariane 5 adapter. Engineers prepare to integrate Herschel with the launcher adapter.

Herschel being lowered onto the launcher adapter. The adapter will connect it to the Ariane 5 during launch.

Herschel being integrated with the launcher adapter on 11 April.

Hydrazine filling operations on 9 March. Engineers must wear scape suits, designed to protect them from the toxic fuel.