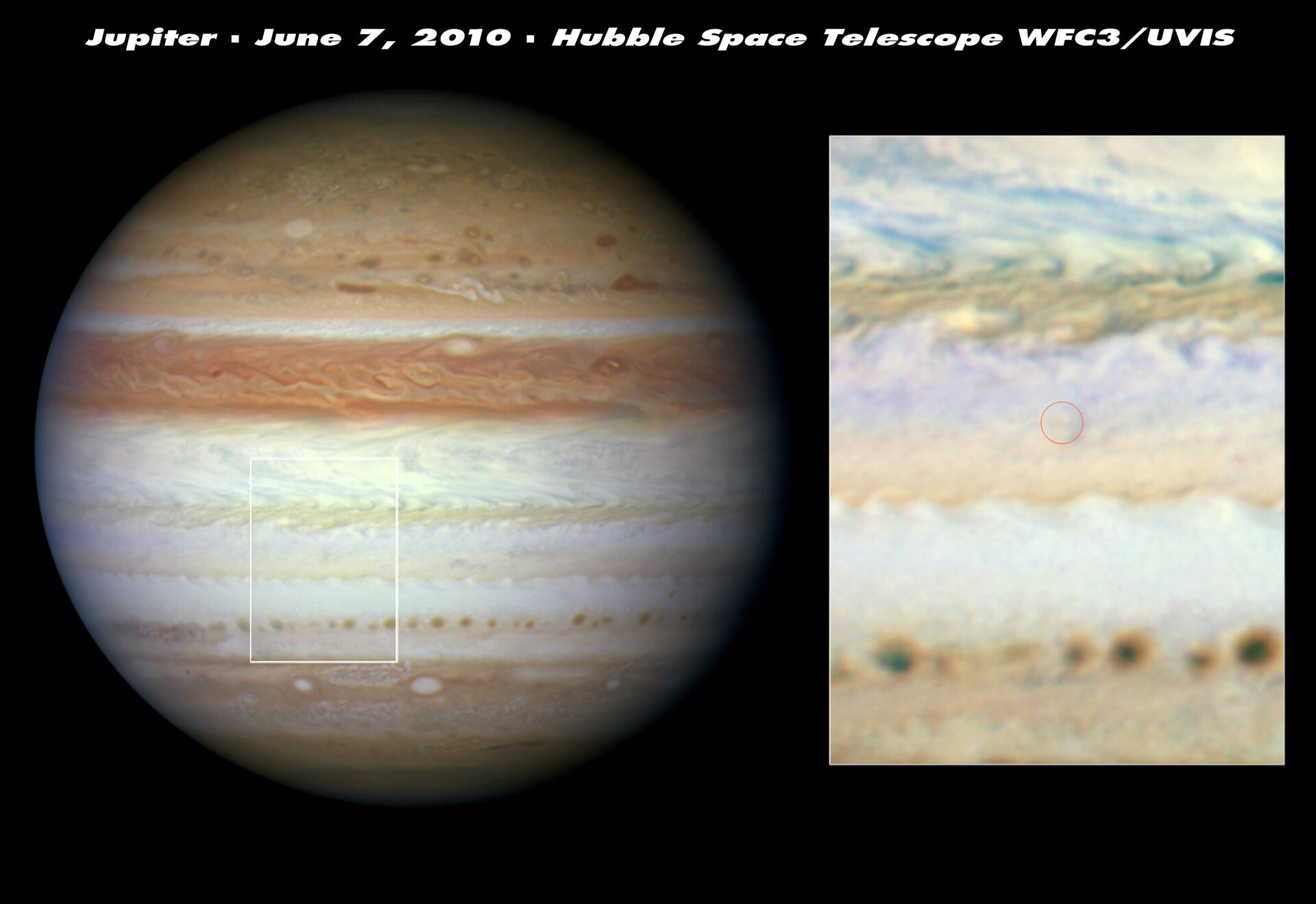 The NASA/ESA Hubble Space Telescope has provided insights into two recent events on Jupiter: the mysterious flash of light on 3 June and the disappearance of the planet’s dark Southern Equatorial Belt.

Astronomers around the world suspected that something had hit the giant planet but they didn’t know just how big it was or how deeply it had penetrated the atmosphere.

Astronomers immediately began searching for a ‘black-eye’ pattern like those left by former impactors, but this time their search was in vain. Now it was Hubble’s turn.

But not even the space telescope could see anything. Images taken on 7 June, just over three days after the flash was sighted, continue to show no sign of debris above Jupiter’s cloud tops. This means that the object did not descend beneath the clouds and explode as a fireball. If it had, then dark sooty debris would have been ejected to rain down onto the clouds.

Instead, the flash is thought to have come from a giant meteor burning up high above Jupiter’s cloud tops.

Dark smudges marred Jupiter’s atmosphere when a series of fragments of Comet Shoemaker-Levy 9 hit the planet in July 1994. A similar phenomenon occurred in July 2009 when a suspected asteroid slammed into Jupiter, again discovered by Wesley.

This year’s intruder is estimated to be only a fraction of the size of these previous ones.

“Comparing the two collisions, from 2009 and 2010, will hopefully yield insights into the types of impact processes in the outer Solar System, and the physical and chemical response of Jupiter's atmosphere to these amazing events,” says team member Leigh Fletcher of the University of Oxford, UK.

As a bonus, Hubble’s observations also provided scientists with a close-up of changes in Jupiter’s atmosphere following the disappearance several months ago of the dark cloud feature known as the Southern Equatorial Belt. The last time it faded was in the early 1970s.

Weather forecast for Jupiter’s Southern Equatorial Belt: cloudy with a chance of ammonia

The team predicts that these ammonia clouds should clear in a few months, as they have done in the past. The clearing of the ammonia cloud layer should begin with a number of dark spots like those seen by Hubble along the boundary of the south tropical zone.