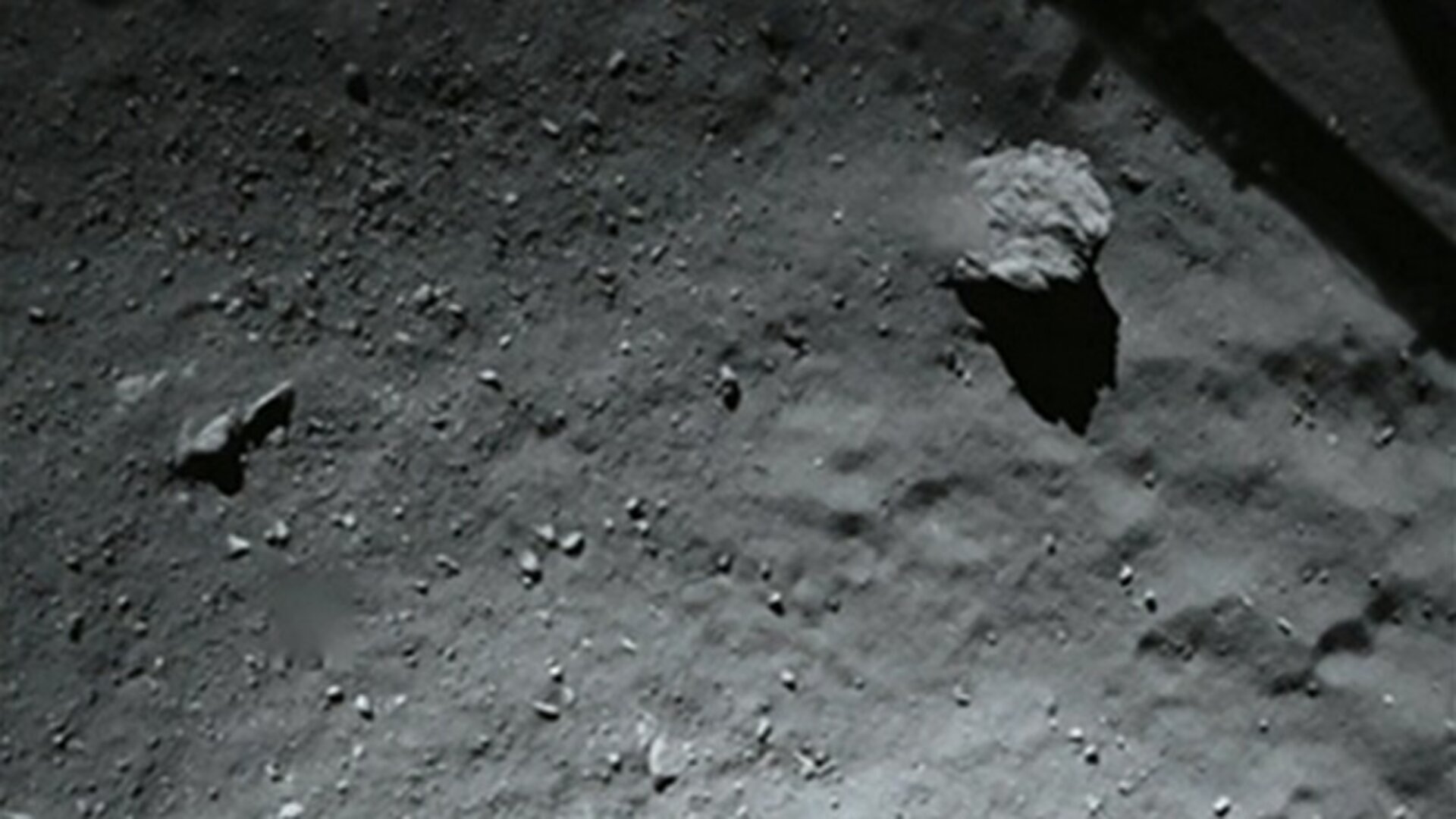 After achieving touchdown on a comet for the first time in history, scientists and engineers are busy analysing this new world and the nature of the landing.

Touchdown was confirmed at ESA’s Space Operations Centre in Darmstadt, Germany at 16:03 GMT/17:03 CET on 12 November.

Since then, scientists, flight dynamics specialists and engineers from ESA, the Lander Control Centre in Cologne, Germany, and the Philae Science, Operations and Navigation Centre in Toulouse, France have been studying the first data returned from the lander.

These revealed the astonishing conclusion that the lander did not just touch down on Comet 67P/Churyumov–Gerasimenko once, but three times.

The harpoons did not fire and Philae appeared to be rotating after the first touchdown, which indicated that it had lifted from the surface again.
Stephan Ulamec, Philae manager at the DLR German Aerospace Center, reported that it touched the surface at 15:34, 17:25 and 17:32 GMT (comet time – it takes over 28 minutes for the signal to reach Earth, via Rosetta). The information was provided by several of the scientific instruments, including the ROMAP magnetic field analyser, the MUPUS thermal mapper, and the sensors in the landing gear that were pushed in on the first impact.

The first touchdown was inside the predicted landing ellipse, confirmed using the lander’s downwards-looking ROLIS descent camera in combination with the orbiter’s OSIRIS images to match features.

But then the lander lifted from the surface again – for 1 hour 50 minutes. During that time, it travelled about 1 km at a speed of 38 cm/s. It then made a smaller second hop, travelling at about 3 cm/s, and landing in its final resting place seven minutes later.

The touchdown signal generated on first touchdown induced the instruments to ‘think’ that Philae had landed, triggering the next sequence of experiments. Now those data are being used to interpret the bounces.
Preliminary data from the CONSERT experiment suggest that Philae could have travelled closer to the large depression known as Site B, perhaps sitting on its rim. High-resolution orbiter images, some of which are still stored on Rosetta, have yet to confirm the location.

The lander remains unanchored to the surface at an as yet undetermined orientation. The science instruments are running and are delivering images and data, helping the team to learn more about the final landing site.

The descent camera revealed that the surface is covered by dust and debris ranging from millimetre to metre sizes. Meanwhile, Philae’s CIVA camera returned a panoramic image that on first impressions suggests the lander is close to a rocky wall, and perhaps has one of its three feet in open space.

After discussions as to whether to activate those science instruments that may cause the position of Philae to shift, MUPUS and APXS have both been deployed.

The primary battery enabling the core science goals of the lander may run out some time in the next 24 hours. As for the secondary battery, charged by solar panels on Philae, with only 1.5 hours of sunlight available to the lander each day, there is an impact on the energy budget to conduct science for a longer period of time. The original landing site offered nearly seven hours of illumination per 12.4 hour comet day.