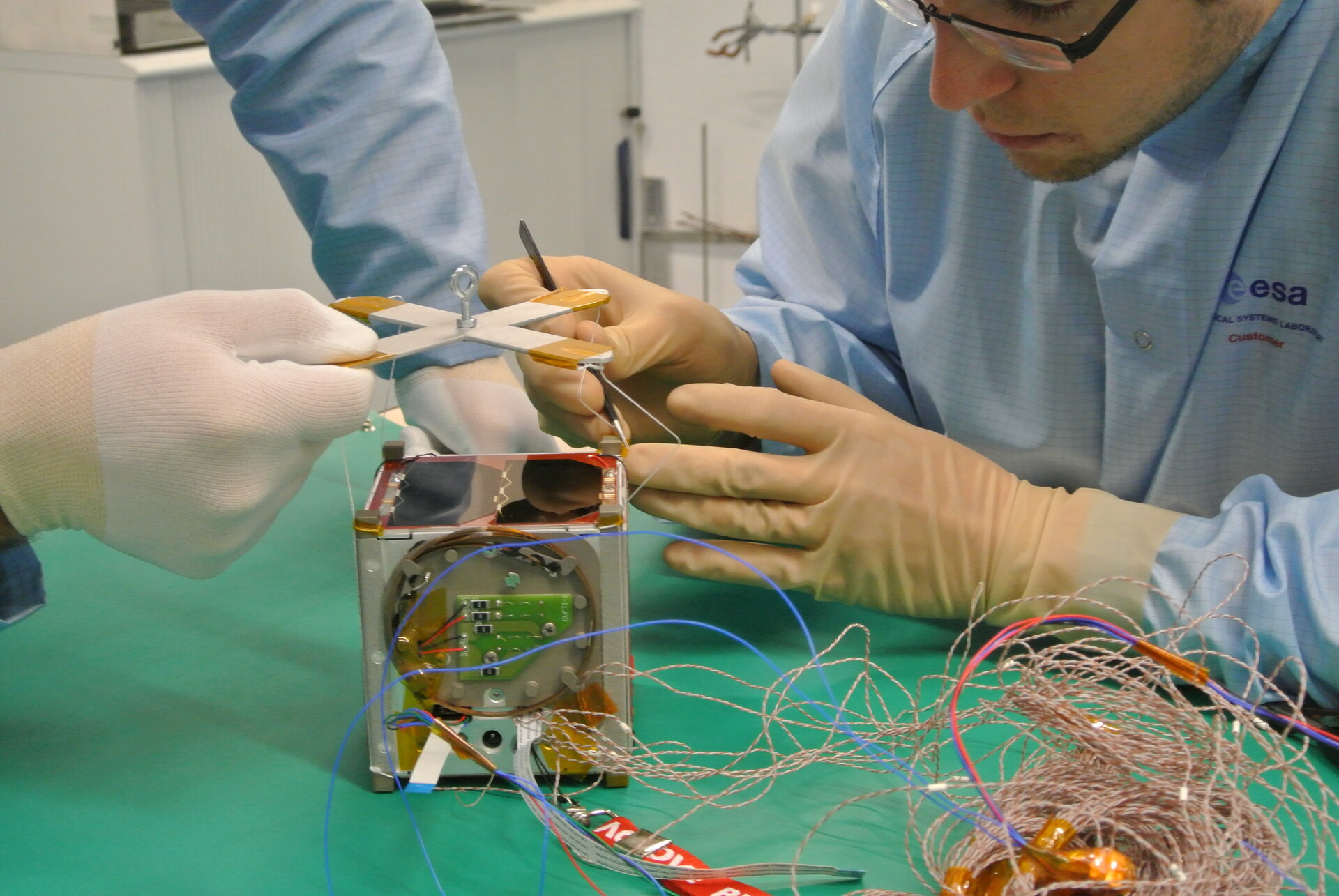 A team of Belgian students have taken steps towards gaining their 'Ticket to Orbit!', not for themselves, but for the CubeSat they are developing.

OUFTI-1 is designed and developed, and now being tested by a team of students from the University of Liège, Belgium. It has a mass of approximately 1kg and dimensions of approximately 10x10x10cm. It is designed to demonstrate the D-STAR digital communication protocol and validate high-efficiency solar cells.

D-STAR is an amateur radio digital communication protocol. Once OUFTI-1 is in orbit, it will allow radio operators worldwide to communicate through the CubeSat.

The students brought OUFTI-1 to ESTEC, the European Space Research and Technology Centre, in Noordwijk, The Netherlands. This is where ESA tests many important satellites. Prior to arriving, OUFTI-1 had completed Phase 1 of the Fly Your Satellite! Programme, which included tests performed in ambient conditions in the university’s laboratories to check the good functionality of the satellite.

During Phase 2 of the programme the CubeSat is tested to demonstrate that it can survive the environmental conditions to which it will be exposed during launch and while in orbit. To simulate the cold and hot temperature cycles that the satellite will undergo during its lifetime in space, a thermal vacuum chamber is used to provide the expected temperatures in vacuum.

First the chamber was pumped down to reach vacuum conditions equal to approximately 10-6 mbar. Then four hot-cold cycles were performed. At predefined moments of the thermal cycling sequence a so-called Functional Performance Check was executed to determine if the CubeSat was working as expected.

The thermal vacuum/thermal cycling test campaign is now finished and the team is currently performing additional tests back at the University of Liège to confirm the CubeSat’s readiness to proceed to the second part of Phase 2: the vibration test to verify OUFTI-1’s capability to survive the launch.

If both the thermal vacuum and the vibration tests are concluded successfully, and if the CubeSat team submits an acceptance data package suitable to demonstrate compliance to the Fly Your Satellite! requirements, the CubeSat will be awarded its 'Ticket to Orbit!'. This allows admission to Phase 3 of the Fly Your Satellite! programme, which is the launch preparation campaign, and that will be followed by Phase 4 – 'CubeSats in Space'.

The CubeSats will be launched to an orbit that will ensure that their natural orbital decay will cause the satellite to deorbit in less than 25 years, in compliance with the requirements on space debris mitigation.

‘Fly Your Satellite!’ builds on the success of the ‘CubeSats for the Vega Maiden Flight’ pilot programme. This culminated in 2012 with the launch of seven student-built CubeSats on the first flight of the new ESA Vega launcher.

Six CubeSats participated in Phase 1 of the current round of the Fly Your Satellite! programme. Three of these CubeSat teams were selected for Phase 2. The first to perform the Phase 2 thermal vacuum/thermal cycling test was AAUSAT4, and now OUFTI-1 has followed. E-st@r-2 will be the next.

Piero Galeone, Head of the Tertiary Education Unit, which coordinates the ESA hands-on programmes for university students, says, “ESA’s Education Office is committed to contributing to the preparation of the new generation of European space professionals, facilitating a direct transfer of expertise from ESA specialists to university students. Fly Your Satellite! plays an important role in achieving the objective of helping students to familiarise themselves with the type of professional practice typically adopted in space programmes”.