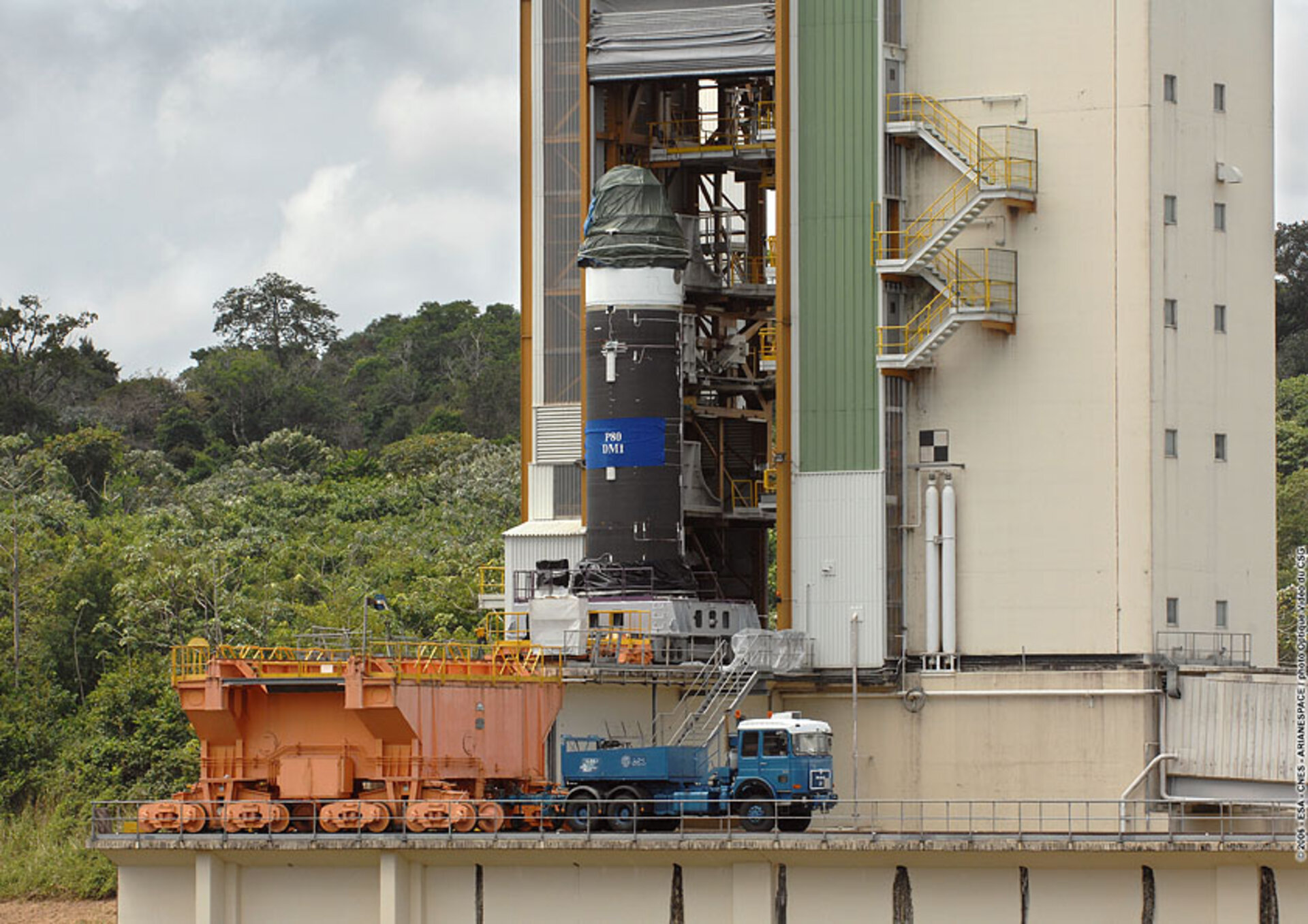 On 30 November, the P80 motor which is to power Vega’s first stage will undergo its maiden static firing on the same test pad used to demonstrate Ariane 5’s solid booster stages in Kourou, French Guiana.

The Solid Booster Test Bench (BEAP) is the unique test pad at the Guiana Space Centre, Europe’s Spaceport. Since 1993, it has seen the successful testing of Ariane 5 Solid Booster Stage (EAP) motors. Of course, none was actually intended to lift off and the facility is equipped with safety systems to prevent a booster breaking loose from the test bench and leaving the ground. In this case, large blades would cut its envelope open, allowing the solid propellant to burn freely without providing any thrust.

Recently, the BEAP has been modified in order to accommodate a different kind of booster for static firing. While it shares its three metre diameter with Ariane 5's booster stages, the P80 motor is much shorter than the 31.2-metre-tall EAP – it is only 11.7 metres high. Nevertheless, it is the largest European solid rocket motor of its kind.

Unlike the EAP’s motor, whose 238-tonne propellant load is cast in three segments which are later assembled together, the P80 features only a single segment with about 88 tonnes of solid propellant. Although this is less than the biggest of the EAP segments, it is far more than any other composite single-segment solid motor ever tested. For comparison, to date the record is held by the motor of the SRB-A booster stage on Japan’s H-2A launcher, with 66 tonnes of solid propellant.

The P80’s propellant load was cast some 6 km from the BEAP, at the Guiana Propellant Plant (UPG) where the EAP’s lower segments are also loaded. In fact, the P80 used the same pit. After an initial test with inert propellant in April 2004, real propellant was poured in the first qualification model of the P80 last August.

“The propellant is not exactly the same as on the EAP’s”, explains Stefano Bianchi, Vega Programme Manager at ESA. “We adapted the propellant mix and the granulometry to increase its performance and density.”

As for the EAP segments, once the propellant’s polymer binder had solidified, the mandrel forming the exhaust canal for hot gases was extracted and the motor underwent numerous inspections to make sure that no bubbles or cracks had formed inside the binder. In a solid motor, these kinds of defects could have explosive consequences. After inspection, the motor was prepared for its test firing.

The P80 is not simply the new motor developed for the first stage of ESA’s Vega small launch vehicle. It is a multidisciplinary demonstrator to validate advanced technologies which could later be applied to Ariane 5’s boosters.

The most obvious change is to the booster casing. It is made of filament wound graphite epoxy, a technology largely used on smaller motors for civilian launchers as well as ballistic missiles. Much lighter than the stainless steel currently used on Ariane boosters, it provides a dramatic increase in payload capacity.

Other improvements in the motor include a new design of igniter with a simplified architecture, also using a carbon-fibre case.

The P80 nozzle looks like a shorter version of the EAP nozzle but its design was revised to achieve more simplicity, incorporate fewer elements, and reduce production costs. New thermal insulation material and a narrower throat improve the expansion ratio and overall performance. The new type of flexible joint makes it a lot easier to steer and has allowed the replacement of heavy hydraulic actuators by much lighter electromechanical ones for thrust vector control.

“There are lots of challenges on this test”, says Stefano Bianchi. “As on every maiden firing, there is also a lot to learn.”

The firing test is planned for 30 November at around 15:00 UTC/GMT (12:00 local time, 16:00 CST/Paris). The timing will depend on wind conditions, to make sure the cloud resulting from the exhaust will not drift over populated areas.

The test will last about 100 seconds, with the motor delivering some 200 tonnes of average thrust.

Developed under a separate programme managed by an integrated team led by CNES, the French space agency, on behalf of ESA, the P80 is the last of Vega’s motors to undergo static firing. The Zefiro 9 and the Zefiro 23, due to power the third and second stages of ESA’s small launch vehicle, were test fired in December 2005 and June 2006 respectively, at Italy’s test centre in Salto di Quirra, Sardinia.

After the 30 November test, it is planned that each of the three motors will undergo an additional static test before the maiden flight of the Vega launcher, which will complement Ariane 5 and Soyuz in the small satellite segment of the launch market.