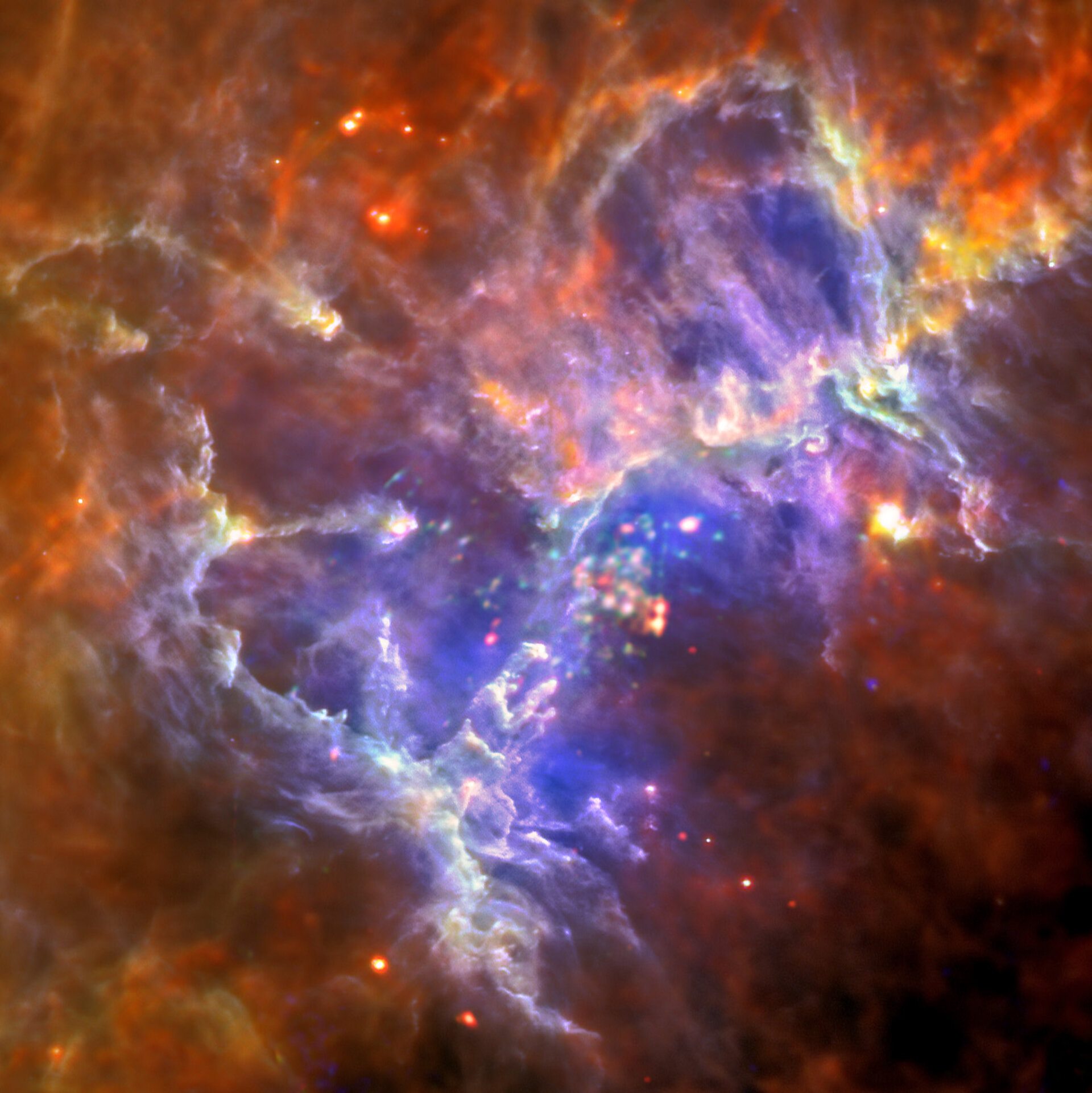 The Eagle Nebula as never seen before. In 1995, the Hubble Space Telescope's 'Pillars of Creation' image of the Eagle Nebula became one of the most iconic images of the 20th century. Now, two of ESA's orbiting observatories have shed new light on this enigmatic star-forming region.

The Eagle Nebula is 6500 light-years away in the constellation of Serpens. It contains a young hot star cluster, NGC6611, visible with modest back-garden telescopes, that is sculpting and illuminating the surrounding gas and dust, resulting in a huge hollowed-out cavity and pillars, each several light-years long.

The Hubble image hinted at new stars being born within the pillars, deeply inside small clumps known as 'evaporating gaseous globules' or EGGs. Owing to obscuring dust, Hubble's visible light picture was unable to see inside and prove that young stars were indeed forming.

The ESA Herschel Space Observatory's new image shows the pillars and the wide field of gas and dust around them. Captured in far-infrared wavelengths, the image allows astronomers to see inside the pillars and structures in the region.

Combining the new space data with near-infrared images from the European Southern Observatory's (ESO's) Very Large Telescope at Paranal, Chile, and visible-light data from its Max Planck Gesellschaft 2.2m diameter telescope at La Silla, Chile, we see this iconic region of the sky in a uniquely beautiful and revealing way.

In visible wavelengths, the nebula shines mainly due to reflected starlight and hot gas filling the giant cavity, covering the surfaces of the pillars and other dusty structures.

At near-infrared wavelengths, the dust becomes almost transparent and the pillars practically vanish.

In far-infrared, Herschel detects this cold dust and the pillars reappear, this time glowing in their own light.

Intricate tendrils of dust and gas are seen to shine, giving astronomers clues about how it interacts with strong ultraviolet light from the hot stars seen by XMM-Newton.

In 2001, Very Large Telescope near-infrared images had shown only a small minority of the EGGs were likely to contain stars being born.

However, Herschel's image makes it possible to search for young stars over a much wider region and thus come to a much fuller understanding of the creative and destructive forces inside the Eagle Nebula.

Earlier mid-infrared images from ESA's Infrared Space Observatory and NASA's Spitzer, and the new XMM-Newton data, have led astronomers to suspect that one of the massive, hot stars in NGC6611 may have exploded in a supernova 6000 years ago, emitting a shockwave that destroyed the pillars.

However, because of the distance of the Eagle Nebula, we won't see this happen for several hundred years yet.

Powerful ground-based telescopes continue to provide astonishing views of our Universe, but images in far-infrared, mid-infrared and X-ray wavelengths are impossible to obtain owing to the absorbing effects of Earth's atmosphere.

Space-based observatories such as ESA's Herschel and XMM-Newton help to peel back that veil and see the full beauty of the Universe across the electromagnetic spectrum.

With regions like the Eagle Nebula, combining all of these observations helps astronomers to understand the complex yet amazing lifecycle of stars.