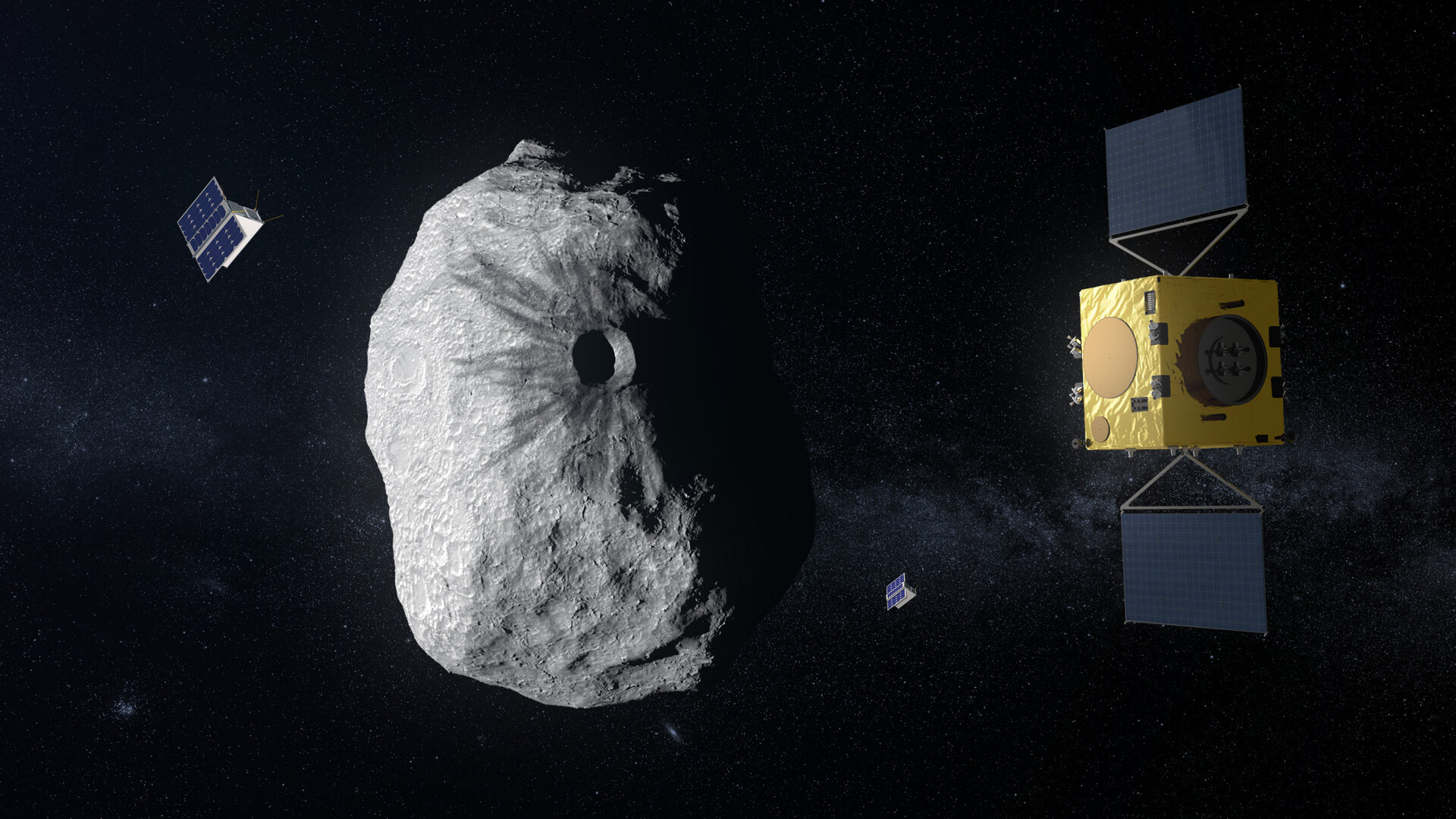 Hera – named after the Greek goddess of marriage – will be, along with NASA's DART spacecraft, humankind’s first probe to rendezvous with a binary asteroid system, a little understood class making up around 15% of all known asteroids.

Hera is the European contribution to an international double-spacecraft collaboration. NASA will first perform a kinetic impact on the smaller of the two bodies, then Hera will follow-up with a detailed post-impact survey that will turn this grand-scale experiment into a well-understood and repeatable planetary defence technique.

While doing so, Hera will also demonstrate multiple novel technologies, such as autonomous navigation around the asteroid – like modern driverless cars on Earth, and gather crucial scientific data, to help scientists and future mission planners better understand asteroid compositions and structures.

Due to launch in 2024, Hera would travel to a binary asteroid system – the Didymos pair of near-Earth asteroids. The 780 m-diameter mountain-sized main body is orbited by a 160 m moon, formally christened 'Dimorphos' in June 2020, about the same size as the Great Pyramid of Giza.

This smaller body is Hera’s focus: the spacecraft would perform high-resolution visual, laser and radio science mapping of the moon, which will be the smallest asteroid visited so far, to build detailed maps of its surface and interior structure.

By the time Hera reaches Didymos, in 2026, Dimorphos will have achieved historic significance: the first object in the Solar System to have its orbit shifted by human effort in a measurable way.

The NASA mission called the Double Asteroid Redirection Test, or DART, is due to collide with it in 2022. DART's kinetic impact will lead to a change in the duration of Dimorphos’s orbit around the main body. But ground observatories will be watching from a minimum distance of 10 million km, and the immediate aftermath may well be hidden by an expected dust cloud. The observatories’ measurements of Dimorphos’s altered orbit are expected to be stuck with a 10% residual uncertainty and the actual transferred momentum – that is, by how much was it deflected? – will not be measured directly, missing a vital piece of information: the mass of Dimorphos and its crater shape.

By actually venturing to Dimorphos, measuring its mass as well as its shifted orbit from up close and performing its own ‘crash scene investigation’ of the asteroid moon’s impact crater and surrounding surface in great detail, Hera will hone our understanding of this grand-scale space experiment. Its data will allow, for the first time, the validation or refinement of numerical models of the impact process at asteroid scale, rendering this deflection technique for planetary defence ready for operational use if ever needed to safeguard our home world, Earth.

DART and Hera were conceived together as part of the international ‘Asteroid Impact Deflection Assessment’ collaboration. The two missions are valuable individually, but by being flown in concert their overall scientific and technological return is significantly boosted. They will contribute to the important and positive message that international cooperation is key for the achievement of a planetary defence initiative.

Hera, a further optimisation of ESA’s earlier Asteroid Impact Mission, was agreed for launch at the Agency’s Space19+ Council of Ministers at European Level in November 2019.