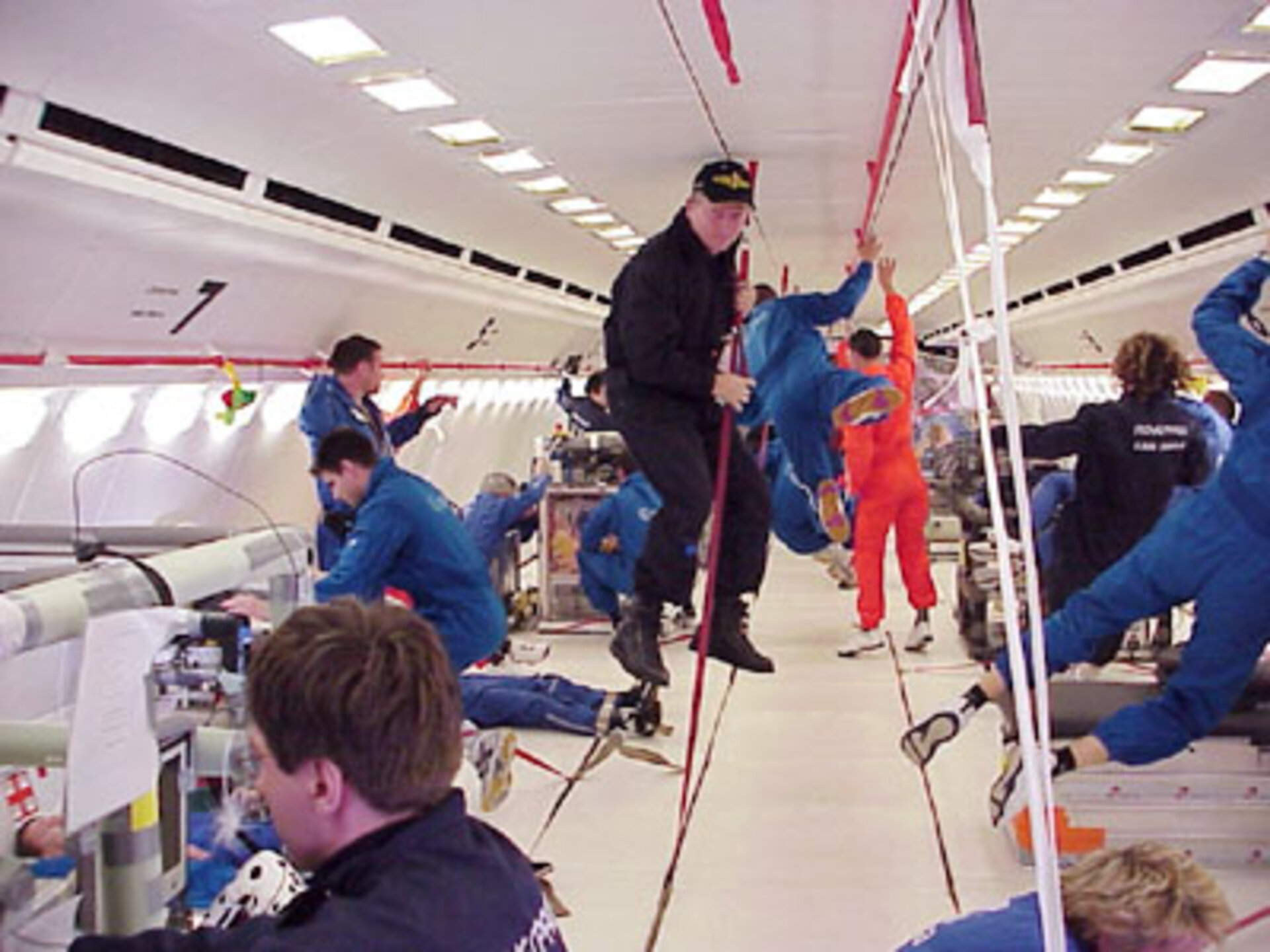 The skies above France fell quiet on Thursday due to a national air traffic controllers' strike. Hearing of it the night before, some microgravity experimenters worried the 34th ESA Parabolic Flight Campaign might lose its final flight. In the event the 'Zero-G' A300 Airbus lifted off right on time at 10:00 CEST, having received exceptional clearance to fly.

"A beautiful day," was one comment at the post-flight briefing. The day's 31 microgravity parabolas had been turbulence free. And in the final couple of parabolas some researchers tried out a new experiment for fun - and had a go riding a genuine flying carpet.

The Campaign was over but the experimenters couldn't relax yet – they had to pack up their experiments and associated gear. Ahead waits analysis of data and eventual publication of findings, and, often in many cases, follow-up parabolic and even space flights.

Professor Andre Aubert of Belgium's University Hospital Gasthuisberg in Leuven is already a 'frequent flier'. This was his third parabolic flight campaign. He and his team have been measuring how heart rate and blood pressure changes during gravity shifts (from normal 1g to Og microgravity and 1.8g hypergravity) with four test subjects either standing up and lying down during the flight - including Belgian astronaut Frank De Winne).

"We're interested in how the cardiovascular system responds to changes in gravity," said Aubert. "Posture is important to this because, for instance, in hypergravity, a person standing will have a lot of blood drain out of his upper body into his legs.

"So we see his heart beating faster because there's less resistance to it – it's like you cycling faster after adjusting the settings on your exercise bike. But the same person lying down won't show such a reaction."

The experiment has applications for returning astronauts but also life on Earth: "About 500 people have flown into space and about two thirds of them have some problem with falling over after returning, as their bodies readjust to gravity. There is also a common related illness called syncope, where people faint as they get up from a chair because of low blood pressure in their heads. Our research teaches us more about both of these."

Aubert plans to carry out a follow-up parabolic flight but he'll be busy during ESA's October Parabolic Flight Campaign as his experiment is due to fly on a Soyuz mission (for the second time following last year's Odissea flight).

Philips engineer Marco Haverlag already has a berth assigned on next October's Campaign for the experiment he's been working on with Eindhoven University of Technology. It concerns the workings of super-bright High-Intensity Discharge (HID) lamps.

"Philips has used parabolic flights once before to examine how halogen lamps function in microgravity," said Marco. "This time we've been looking at HID lamps, in an attempt to understand de-mixing instabilities which can take place inside them.

"The middle of the lamp burns at 5000 degrees while the sides are cold. In gravity this produces upward and downward convection currents of particles and gas and makes a complicated interactive process involving diffusion and electrical effects more difficult still to understand.

"Removing gravity makes it easier: the exciting thing about the flights is we actually saw with our own eyes that the lamps change their characteristics as gravity changed."

A different HID lamp experiment will be flown in October. This will actually be testing a flight-model due to go into orbit by Soyuz taxi flight in spring next year. The experiment will be operated by Dutch ESA astronaut Andre Kuipers, who took part in this week's parabolic flights.

Another experiment tested this week might hopefully launch into orbit before it. The joint ESA-NASA Pulmonary Function System is due to be deployed aboard ISS once Shuttle flights resume as part of the station's Human Research Facility. The hardware was receiving its microgravity flight-test this week: although experimenters uncovered a few software bugs overall the equipment worked as planned.

It analyses the gas content of astronauts' breath using a novel technique called 'photoacoustics'. Infrared light is filtered by holes in a fast-spinning wheel into distinctive wavelengths – chosen as 'signatures' of various gases. Each signature infrared wavelength heats up one particular gas within a test cell – but as the wheel spins round to a different filter that gas cools again. The resulting rapid expansion and contraction can be detected by a microphone as sound – which is decoded and measured to reveal the gases present.

"My formal retirement date from ESA actually came midway through this week's flight campaign," said ESA PFS Project Manager John Ives. "I started work on the first predecessor to PFS back in 1985, so it was great to finish up seeing it working as it will when it's used for real."