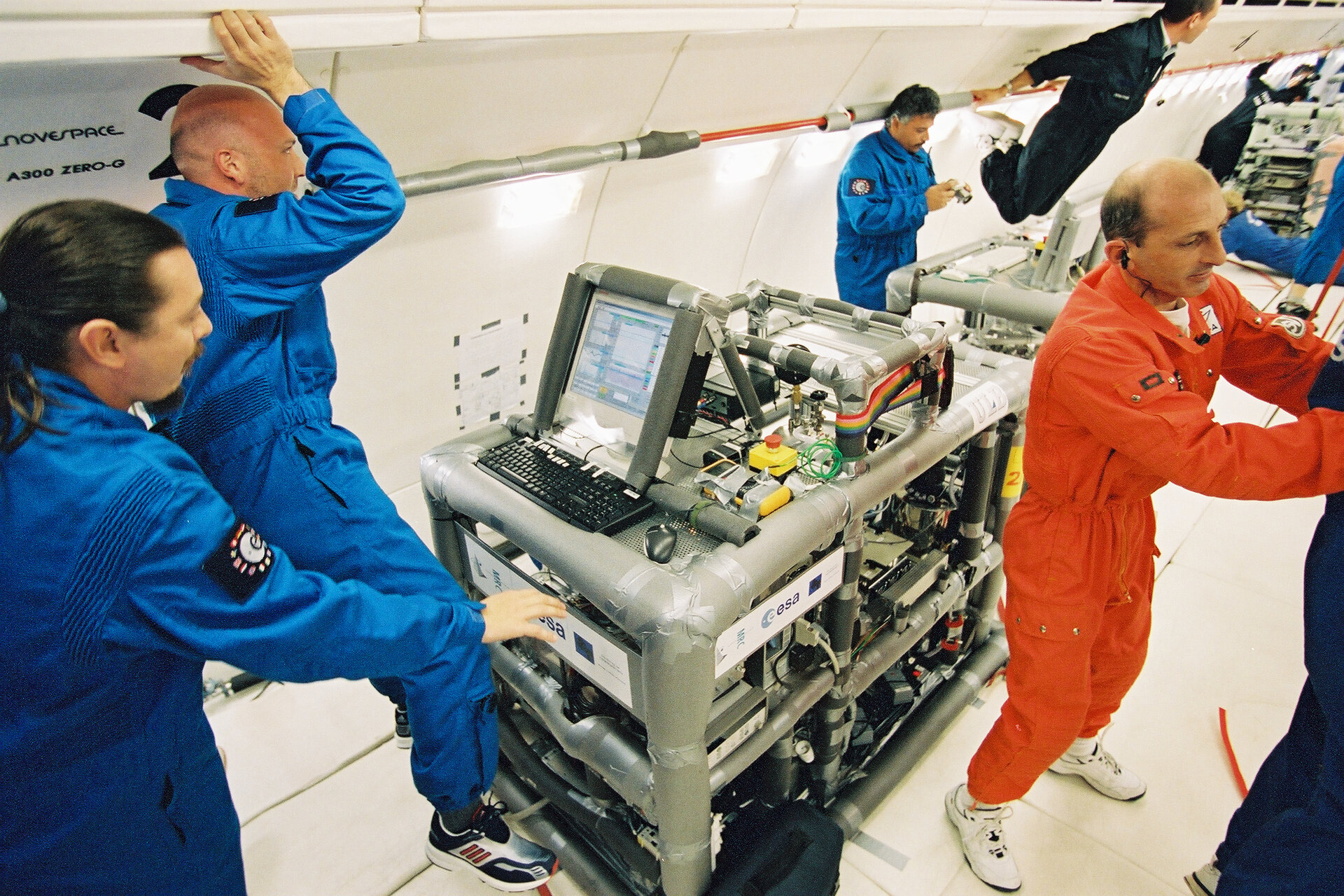 The 'Zero-G' A300 Airbus flew further and longer than usual on Wednesday's flight, on the second day of the 34th ESA Parabolic Flight Campaign. The result was a series of turbulence-free microgravity arcs – and the first ever ESA parabolic flight by the A300 without a single passenger being sick!

The flight lasted almost an hour longer than usual. After an initial parabola showed turbulence, the pilots went on a hunt for better weather, heading all the way up to French Brittany from their Novespace base at Bordeaux-Mérignac Airport.

Student experimenters from the University of Regensburg were especially glad to be aboard. Known as the 'Upside Downers', they had a bad day Tuesday, when their electric engine - used to shake granular materials to see how they settle in microgravity - burnt out.

They had to work well into Tuesday night to replace the engine as well as replace a broken collector box. "We finally tried out the shaker in our hotel room," said student Mark Rickhey. "It was quite loud and the neighbours complained!" The good news is that on Wednesday the experiment worked fine.

Physical sciences experiments such as this 'GranMat' test concentrate on how physical processes alter without gravitational distortion. One team from France's Laboratoire de Combustion et Detonique is burning a flame inside an air-fed combustion chamber to see how fire diffuses in microgravity, and the role soot plays in radiating its heat. The hope is to use the data gathered for future hazard analysis of manned spacecraft.

And experimenters from the Universitie de Paris-Sud are assessing the best of various ways of combining gas and liquid to make foam in weightlessness – everything from whipping to gas jets to spraying – as they evaluate chamber designs intended as part of the International Space Station's planned Fluid Science Lab (FSL).

"Foam is created by combining gas and liquid, and you end up with something that then behaves like a solid," said Principal Investigator Arnaud Saint-James. "The underlying process remains mysterious but foams in orbit will be longer-lived and much simpler to study."

Meanwhile life sciences experimenters have their focus on biology; specifically how biological systems evolved in the presence of gravity over long millions of years react when this constant is removed. Usually (as in this Campaign) that means human test subjects fly alongside experimenters – a luxury only possible during parabolic flights.

The subjects working with Belgium's University of Louvain team are seated while they grip an object between their thumb and forefinger and move it round in a circular motion. Sounds simple enough, but they're instructed in 1G, told to start as the first bout of 1.8G sets in and keep the object moving through microgravity and back to 1.8G again as the plane levels out.

As the value of gravity shifts these test subjects have their arm motion tracked by a camera system as well as sensors in the object itself. All the time their eye movements are also being recorded: the intention is to study hand-eye co-ordination and how visual feedback helps determine the correct direction of the object and the gripping force needed to keep hold of it. This research could provide swifter methods to acclimatising astronauts entering microgravity (as well as those returning to Earth).

An experiment from University Hospital Gasthuisberg in Belgium has already flown in space, during last year's Odissea Soyuz mission to the ISS. It is a non-invasive system of recording subjects' heart-rate (with electrocardiograms or ECGs) and blood pressure (with finger cuffs) to see how the autonomic nervous system responds to gravity changes.

Data gathered during the mission on longer-term cardiovascular adaptation to microgravity will later be compared to shorter parabolic microgravity responses. It was hoped the Oddissea crew would be reunited for Wednesday's flight, but in the event only Belgian astronaut Frank De Winne was able to make it.

"As a test subject, I didn't have to do anything except stand still and breathe," said Frank. "That made the flight a little less comfortable, because there's nothing to distract you from the feeling of the gravity shifts. I actually prefer space to zero-G flying – parabolic flights are difficult to get used to."

Another life sciences experiment on these parabolic flights would already be on ISS if not for the tragic loss of the Shuttle Columbia in February halting Shuttle launches for the time being.

It works non-invasively, by analysing how the mix of gases in the breath of its test subjects alter between inhalation and exhalation. Flying it on the Campaign is a chance to test the instrument works in microgravity as well as do science.

The ESA PFS Project Manager John Ives volunteered as a test subject on Wednesday's flight: "It was very interesting to experience it from the other side, so to speak. It went well."

They are studying how commands move from the motor cortex of the brain along the spinal cord to the muscles of the arm, how we instinctively perform arm movements without ever unbalancing ourselves, and how the strength and pattern of the brain's electrical commands may alter without gravity.

The team do this by applying brief electromagnetic pulses to the brain and tracing (using electromyography or EMG) the resultant action potentials along the spine and trunk to muscles.

The team use trained dancers as well as 'naïve' subjects because the former exhibit greater control over their trunks than ordinary people. The team's aim is to better understand how brain, limb and trunk interact, and so improve rehabilitation of individuals recovering from strokes or spinal injury.

Test subjects have to have a magnetic stimulator held to their head along with multiple electrodes attached to them, but Kitsou had no complaints: "The experiment is very worthwhile, and microgravity is always enjoyable – a moment of pure movement."