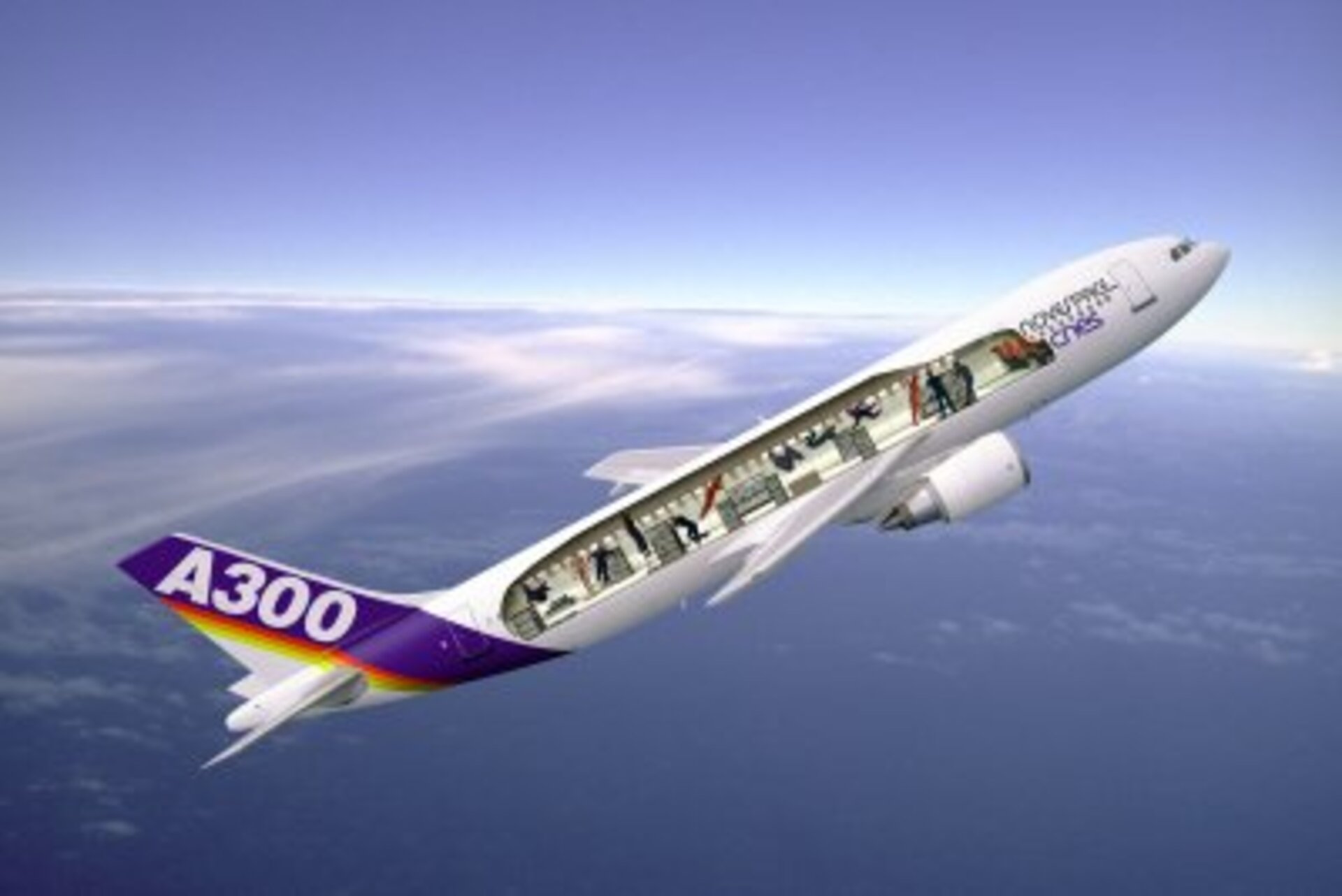 This 'Zero-G' Airbus A300 parked on the tarmac at Bordeaux-Mérignac Airport is really a laboratory with wings. Within a week a dozen scientific teams will be aboard it as it thrusts skyward, then freefalls – and in so doing briefly cancels out the effect of gravity.

ESA's 34th Parabolic Flight Campaign begins with a week of preparation and training for the experimenters involved. Then from next Tuesday French firm Novespace's specially strengthened Airbus takes off once a day for three days. High above the Gulf of Gascogne, it flies a series of parabolic arcs that briefly reproduce microgravity conditions inside its padded cabin.

It is as if the Airbus rides an invisible rollercoaster; its pilots put it into a steep climb at full thrust, then cut its engines almost to zero.

The plane is now subject only to the pull of gravity and begins to trace a parabola through the sky – like the path of a ball thrown into the air. Falling freely cancels out gravity's effects inside the aircraft for some 20 seconds, until finally its pilots power up the engines to return the Airbus to the horizontal.

With 31 parabolas flown per two and a half hour flight that adds up to about ten minutes of microgravity per day – a valuable resource for scientists across Europe interested in how materials and living matter act in the absence of weight.

"The flight campaigns provide rapid and cost-effective access to microgravity," said Vladimir Pletser, ESA Co-ordinator for the Parabolic Flight Campaign. "Parabolic flights enable us to have a very rapid turnaround from an initial proposal to flying the final experiment, perhaps six months or less.

"Uniquely, the effects of the transition between gravity levels can also be studied. Variable levels of gravity up to about 1.8g can be generated by different aircraft manoeuvres, depending on the particular requirements of the experimenters.

"And when it comes to human biology, experimenters can interact directly with their subjects – something not usually possible in space."

Some well known test subjects are coming aboard this time. ESA astronaut Frank De Winne will be reunited for a day with his crewmates from last October's Odissea mission – Sergei Zaletin and Yuri Lonchakov.

The trio will serve as test subjects for an experiment by researchers from Belgium's University of Leuven. They are investigating cardiovascular response during weightlessness, a continuation of work carried out during De Winne's eight-day Soyuz-ISS taxi flight.

And among the other 11 experiments packed into the Zero-G Airbus, ESA and the Karolinska Institute in Sweden are flight-testing a Pulmonary Function System (PFS) intended for the International Space Station. This team will be accompanied by Dutch ESA astronaut Dr André Kuipers as a test subject. Kuipers is due to fly on a Soyuz taxi mission early next year.

"The PFS analyses the gases inspired and expired from a subject's lungs," said PFS Project Manager John Ives. "This gives us data not only on how their lungs are working in microgravity but also how rapidly their blood circulates by seeing how quickly various gases are absorbed."

Danish company Innovision has also collaborated on the PFS and hopes to develop a version for use by hospital doctors. An earlier version of this system – known as the Advanced Respiratory Monitoring System 2 (ARMS-2) - was flown on STS-107 in February 2003, then tragically lost with the Shuttle Columbia and its crew.

"This experiment demonstrates how their research goes on," said Pletser.

Two student teams who flew parabolic experiments last year are returning to gather more results. A German team from the University of Regensburg will observe how granular materials of different sizes settle in microgravity. In normal conditions larger grains end up on top – known to physicists as the 'Brazil nut effect' – but it is not known why.

And students from the University of Technology of Helsinki will check the error rate of compact discs burned in weightlessness, to assess whether CDs are a suitable data storage medium for ISS.

The three campaign flights will be far from pleasure trips for the dozen highly motivated teams, Pletser emphasised: "Twenty seconds per parabola is a very short time, but it can also be a very long time if you're well-enough prepared.

"We tend to mix up the teams a little bit by adding already-flown personnel with newcomers to try and avoid problems. A percentage of people can end up being sick but it's difficult to predict who will be susceptible. Researchers aren't bouncing around the cabin, they stay strapped near their equipment to get the work done.

"But there's one well-netted section of cabin, where people can take time out for a parabola and free-float themselves."

Pletser himself is a veteran, having flown through some 3400 parabolas in the last 15 years: "People experiencing microgravity for the first time always look like they're trying to swim, kicking their arms and legs as if the air around them is turning viscous. And they have wide big eyes as they lose all their usual reference points.

"As for what it feels like... you can try and describe it as much as you want, but it never comes close to the actual experience."