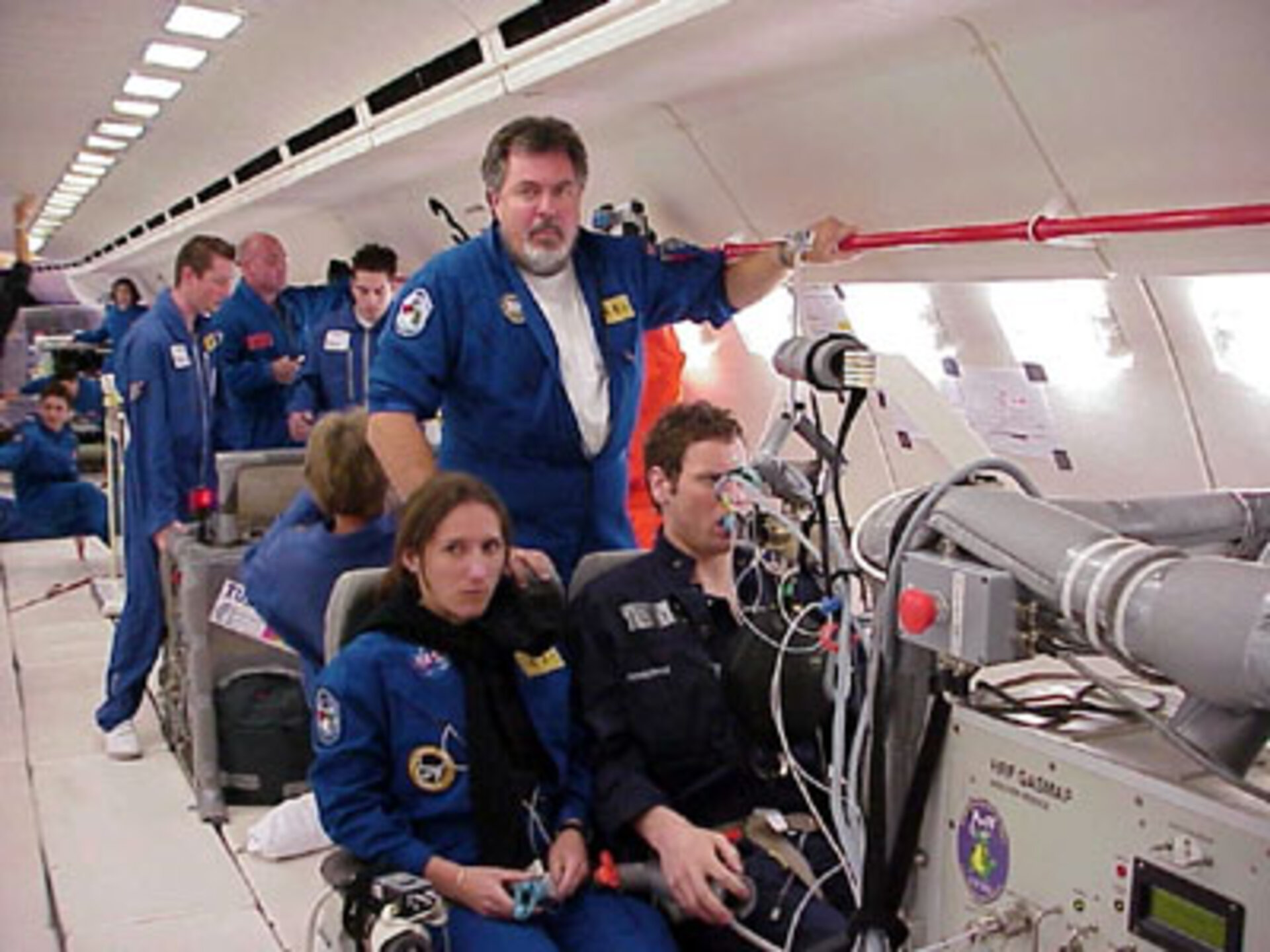 Along with the big 'Zero-G' sign painted on the fuselage of the A300 Airbus, the other big clue this was no ordinary flight into Bordeaux-Mérignac Airport yesterday was the blue flight suits worn by all 40 disembarking passengers.

A few of these passengers looked sickly, and all of them looked tired. But then for the last three hours they'd been working very hard – in conditions like nothing on Earth.

The first flight of the three-day 34th ESA Parabolic Flight Campaign touched down at 12.55 CEST. Twelve teams from across Europe had prepared for months for the opportunity to carry out experiments in weightless conditions.

The Novespace-operated Airbus flew a series of 31 parabolic arcs in a 200km-long airspace area set-aside for it above France's Atlantic coast. During these arcs the four pilots manoeuvre the aircraft so as to cancel out thrust and atmospheric drag and eliminate wing buoyancy. For 20 seconds at a time the Airbus is subject only to the force of gravity – and everything inside it becomes weightless as a result.

"I'd say a parabolic flight is equivalent to half the experience of a space flight," pilot Philippe Perrin had told the experimenters. "You feel the microgravity, just without the view of the Earth that goes with it." Philippe flew on a Shuttle mission last year as a French CNES astronaut and has since joined the European Astronaut Corps.

Boarding the aircraft the passengers sat in standard chairs for take-off, but before the parabolas were due to begin they moved to the padded and windowless central section of the plane and attended to their many and varied experiments bolted to the floor. These experiments are focused on either the physical or life sciences.

One physical sciences team from Germany's Darmstadt University of Technology is using a heated plate to warm a container of liquid and form a vapour bubble - like the ones you get boiling a kettle. But unlike those, this bubble won't be detached upward from the heated surface by gravity as it grows above a certain size.

The aim is to make a large enough bubble fixed to the surface so experimenters can observe just how such bubbles transfer heat to liquids – filling a gap in existing theory with implications for future boiler and power station designs.

Dutch researchers from the Eindhoven University of Technology are working with Philips on ways to build better light bulbs. High-Intensity Discharge (HID) lamps are already prized in environments such as sports fields and parking lots because of their high - up to 40 per cent - energy efficiency.

But the bulbs can sometimes go wrong: the chemicals inside them can begin to de-mix or the light arc starts to wobble in a striking helix pattern, both for unknown reasons. The team is flying a set of HID bulbs while using spectrometry to see how the bulbs react to differing gravity values, providing insight into why they fail and how to improve them in future.

In the post-flight debriefing both sets of teams expressed general satisfaction in how the flight had gone, although Bordeaux's blue skies were less tranquil than they looked and mid-air turbulence struck at various points, dislodging the German team's bubble before it could really get growing.

A few teams ran into other problems. One student team from the University of Regensburg had their electric engine - used to vigorously shake multi-sized grains to see how they settle in weightlessness – break down shortly into the flight. Luckily they have a spare to fly tomorrow. And nausea took its toll on a few human test subjects.

The scientific teams had a busy night repairing and cleaning-up their experiments. Cleanliness is vital in a microgravity environment. During the briefing the crew displayed loose debris scattered throughout the aircraft during the parabolic flight – it included metal shavings and loose nuts, potentially harmful to human beings and aircraft systems alike.

Wednesday's flight is due off at 10.00 CEST, with the Airbus doors sealed promptly a half-hour earlier. All experimenters know not to be late – they wouldn't miss their next dose of microgravity for the world.