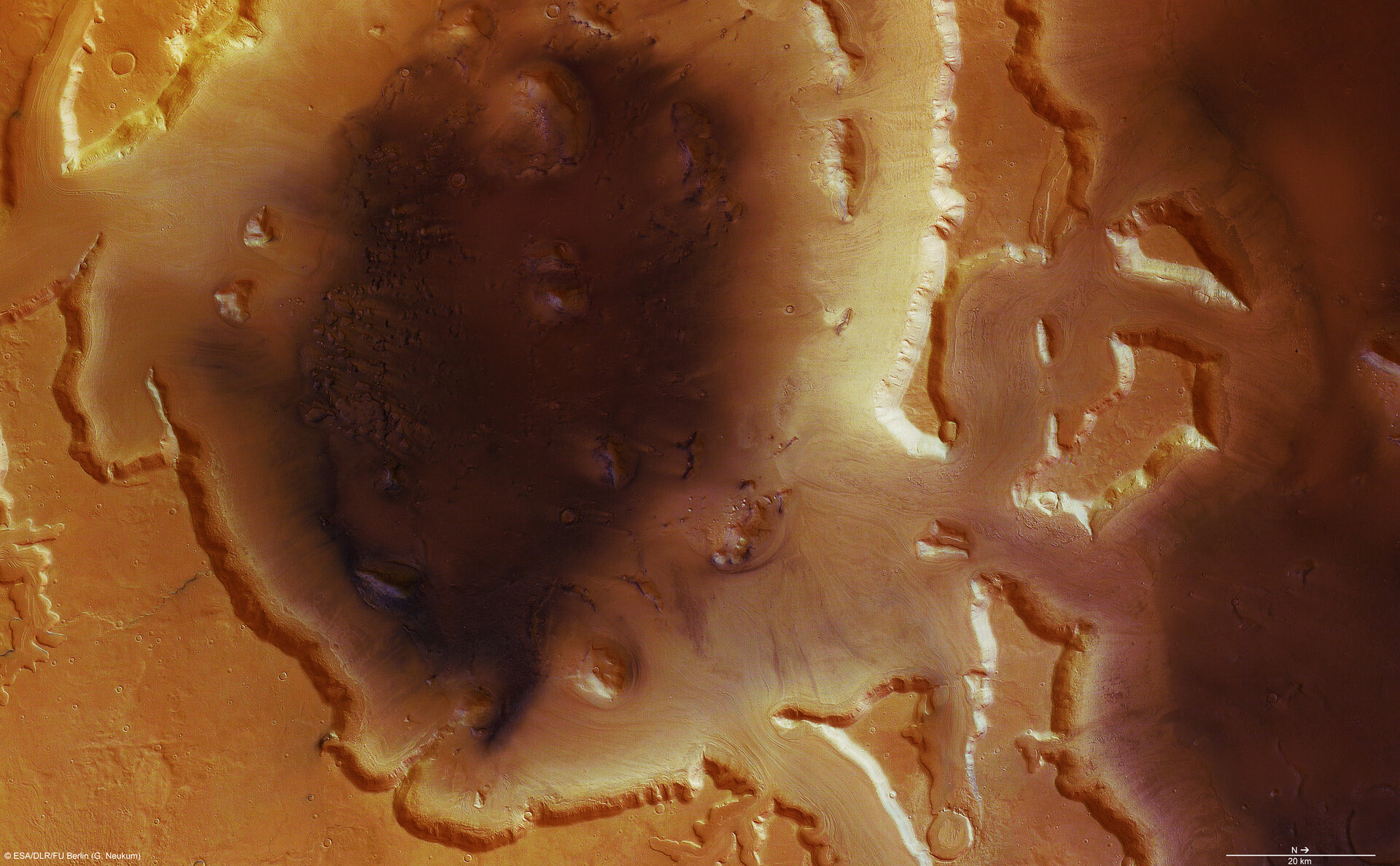 The High Resolution Stereo Camera (HRSC) on board ESA’s Mars Express has captured breathtaking images of the Deuteronilus Mensae region on Mars.

The images were taken on 14 March 2005 during orbit number 1483 of the Mars Express spacecraft with a ground resolution of approximately 29 metres per pixel.

The scene is dominated by a depression measuring approximately 2000 metres in depth and 110 kilometres in diameter, north to south.

Visible in the centre of the first image, the interior of the depression is characterised by dark material, differing from the light-toned surrounding plains.

It is believed that these valleys may have originated due to intense flooding by melted water ice. The water then froze rather quickly, flowing down the slopes of the depression like a glacier. Aeolian sediments (eroded by the action of wind) traced the flow pattern on the surface.

The northern part exhibits a finger - shaped elevation which was circumvented by the masses of water and ice.

To the west, the flow of water mixed with ice broke through another elevation and formed a drop - shaped feature while flowing into the depression.

Mars experienced numerous events of this kind in the past, when rising magma or impacts caused frozen groundwater to melt resulting in major flooding events.

One of the most striking features on Mars is the dichotomy between the southern highlands and the northern plains, lower by up to 3 kilometres. The boundary between these two regions is marked by a transition characterised by an intact highland zone and areas with remnant mesas and isolated eroded knobs.

The scene of Deuteronilus Mensae depicts different stages of highland degradation. Numerous flow patterns in wide valleys and along ridges and scarps indicate movement of debris mixed with ice towards the surrounding areas.

Since the discovery of these structures, scientists assume that the mixture of debris and ice resembles rock glaciers commonly found in cold-climate areas on the Earth.

As on Earth, these landscapes are climate indicators. Whether ice could be still present in the porous spaces in Martian features and how active these landforms may be today is still a subject of discussion.

The anaglyph image was calculated from the nadir and one stereo channel. The black and white high - resolution images were derived from the nadir channel which provides the highest detail of all channels. Image resolution has been decreased for easier downloading.